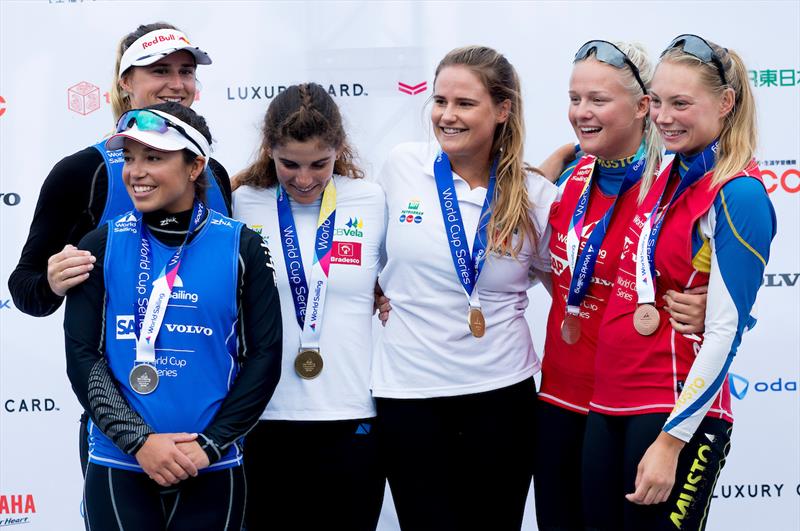 Five of 10 podiums were completed on Saturday after the first day of Medal Races at the World Cup Series event in Enoshima, Japan and Australia’s Jason Waterhouse/Lisa Darmanin coming from second all week to take Gold.

Enoshima and Sagami Bay received extensive rainfall overnight but as a breeze began to develop, there was nothing that could dampen the competitors' spirits, with five Medal Races on the cards and a continuation of fleet racing elsewhere.

Martine Grael/Kahena Kunze (BRA) had confirmed gold the day prior in the 49erFX, while James Peters/Fynn Sterritt (GBR) conquered in the 49er.

Fleet racing continued in the Laser, Laser Radial, Finn, Men's 470 and Women's 470. Elliot Hanson (GBR) has an unassailable lead in the Laser to seal Gold with a race remaining.

Waterhouse/Darmanin ended Ruggero Tita/Caterina Banti's (ITA) winning streak in the Nacra 17 after an intriguing Medal Race – which was not without controversy before the start gun even sounded.

Ahead of the race, Nathan and Haylee Outteridge (AUS) protested the two Italian boats under class rule C.8.1(a), which all relate to foil maintenance.

The Jury found that, “the outermost surfaces of the daggerboards of ITA 26 and ITA 5 were sanded,” but they concluded that “the essential shape, characteristics and function of the original component were not affected,” therefore the Italian boats did not break a class rule.

Speaking after racing, Waterhouse said, “We feel they do things outside of what you should, but at the end of the day, it's up to the jury. As long as we know we can do the same thing, we're happy to chase in that way.”

Tita/Banti took a five-point advantage over Waterhouse/Darmanin into the Medal Race, with Vittorio Bissaro/Maelle Frascari (ITA) and Nathan and Haylee Outteridge (AUS) in contention in third and fourth.

The two Australian and Italian teams fought hard from the off and a clean start enabled all of the medal contenders to hit the front of the fleet.

Tactical duels unfolded as Tita/Banti initially did enough to hold on to Gold. However, a lapse of concentration cost them dearly.

“On the first downwind we gybed a bit short to the layline and we had to gybe again,” Tita explained. “The other teams had more pressure and they were able to round the mark and that cost us a lot.”

Waterhouse/Darmanin were in control at the front of the pack and the other Italian and Australian teams moved ahead in second and third, pushing Tita/Banti to fourth. This was not enough for Gold and they ran out of time to catch up.

Waterhouse and Darmanin crossed the line to take Gold with Tita/Banti claiming Silver and Bissaro/Frascari Bronze, with the Outteridges maintaining fourth.

“We had a game plan before the start,” said Waterhouse. “We knew the left was going to be very strong, so we wanted to lead that way off the pin end. It was tight. We had to do a lot of tactical battling to keep the Italians off behind us. Lisa did a great job by keeping us in the right spot and I made the right tactical decisions.”

Darmanin added, “The Italians have definitely had an edge over the last year and we've been chasing to be better every day.

“They showed at the beginning of the week that they're quick – and we know we have to go home and work hard to be just as quick or quicker.

“To have two Italians on the podium goes to show they're doing well but Nathan and Haylee were fourth. The Aussie squad is chasing them.”

Kiran Badloe (NED) had a good advantage ahead of the Medal Race, and second place ensured he sealed Gold.

The 40-boat Men's RS:X Enoshima fleet has featured many of the leading contenders, with numerous Olympic, World Championship and World Cup medallists in the pack.

“The level has been insane,” expressed Badloe. “Everyone has been on top of their game and sailed really well. I just had to be on it the whole time. I wasn't sailing amazingly but I was just the most consistent out of everybody, and that put me on top.”

Van Rijsselberghe won gold at the recent Hempel Sailing World Championships in Aarhus, Denmark, defeating Badloe. Even though today was Badloe's, he played down any talk of a rivalry, reiterating their success means national success.

“It's great to come out on top and beat everybody else. I would love it if we could have done a 1-2 here. It doesn't always go our way but I'm happy I got on top, and we'll see him back up there in no time at all.”

Peina Chen (CHN) had Bryony Shaw (GBR) breathing down her neck ahead of the Women's RS:X Medal Race. The pair were split by just three points and a huge battle was expected.

Shaw and Chen opted to head right of the racing area, but those on the left found strong breeze that propelled them forward. Chen tacked to the left early on and managed to regain places on the first upwind, but Shaw was left at the back of the fleet.

The British sailor was not able to recover, finishing in ninth to Chen's second and handing the Chinese racer Gold.

“For me it's been a very tough week,” said Chen. “All the sailors have been sailing really well. The conditions have been quite nice for me but it has been hard with some shifty winds. There were a lot of good sailors here, looking at and learning about Enoshima.”

James Peters and Fynn Sterritt (GBR) took the 49er gold medal in style by winning the Medal Race. The Brits were locked on 52 points with Poland's Lukasz Przybytek and Pawel Kolodzinski, in front of Logan Dunning Beck and Oscar Gunn (NZL) on 56.

As the Brits thrived, the Kiwis and Polish team dropped to the back of the fleet, finishing eighth and 10th to claim Silver and Bronze respectively.

“We're over the moon,” commented Sterritt. “It's been an up and down week. Everything seemed to go our way in that race.

“We found our groove and were comfortable with our set-up. We were really calm and know we can win when we're under pressure. We kept it controlled. James did an awesome job with the tricky decisions.”

Martine Grael and Kahena Kunze (BRA) had gold wrapped up ahead of the Medal Race so they sailed without pressure, finishing fourth.

On their victory, Kunze commented, “This is the first time we've won by this amount and we're really happy because it's at the Olympic venue.

“We achieved our goal for this event. We felt some stress in Aarhus at the Worlds but we managed to synchronise as a team and, more than that, we've sailed well in these tricky winds in Enoshima.”

Alex Maloney and Molly Meech (NZL) came through in second in the Medal Race to take Silver.

Ahead of the race, Helene Naess and Marie Ronningen (NOR) received a ten-point discretionary penalty following a Technical Committee protest. The Norwegians won the Medal Race and had they not received the penalty, they would have completed the podium. That honour fell to Sweden's Klara Wester and Rebecca Netzler.

Elliot Hanson (GBR) has a 43-point lead over Thomas Saunders (NZL) going into the Medal Race and cannot be removed at the top of the tree. A fight will be on for Silver and Bronze as Saunders has Matthew Wearn (AUS), Philipp Buhl (GER) and Sam Meech (NZL) in close company.

Marit Bouwmeester (NED) has an 18-point lead going into the Laser Radial Medal Race and knows a ninth or better will give her Gold. Josefin Olsson (SWE) is second on 46 points, 2018 World Champion Emma Plasschaert is third on 49 and Hannah Snellgrove, on 52, is fourth.

Afrodite Kyranakou and Anneloes van Veen (NED), Ai Kondo Yoshida and Miho Yoshioka (JPN) and Benedetta di Salle and Alessandra Dubbini (ITA) fought hard for position in three Women's 470 races. The Dutch team will go into the Medal Race on 29 points. The Japanese are second on 33 and the Italians are on 34.

The Japanese Men's 470 teams maintained consistency again in the 32-boat fleet. Keiju Okada/Jumpei Hokazono (JPN) lead on 32 points, eight clear of Mat Belcher and Will Ryan (AUS) who have been nestled amongst the Japanese all week. Daichi Takayama/Kimihiko Imamura (JPN) and Kazuto Doi/Naoya Kimura (JPN) are third and fourth on 43 and 51 points respectively.

Nicholas Heiner (NED) overhauled Giles Scott (GBR) in the Finn after three races. Heiner leads on 32.8 points with Scott following on 36 and Ed Wright (GBR) in third on 37.