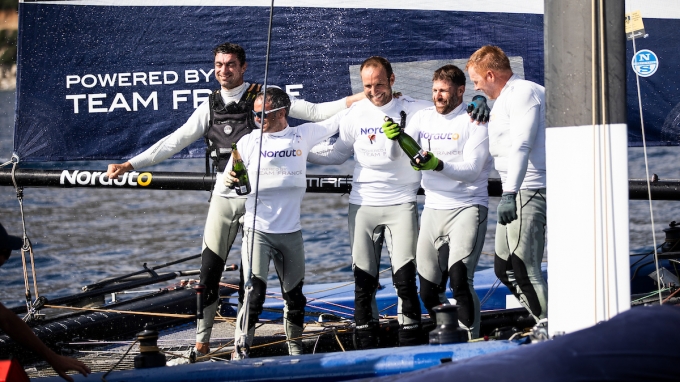 Light winds on the GC32 Villasimius Cup’s final day may not have provided the same top speed foiling action of the previous three days, but there was high drama across the leaderboard during today’s three races with first place changing twice and third place swapping. Out on the bay off Marina di Villasimius, the 5-7 knot wind started off in the east-southeast before veering south-southeast for the last two races made for particularly tricky racing.

Franck Cammas’ NORAUTO powered by Team France started today with a four point lead over Realteam, but this advantage evaporated when they finished sixth in the first race, as their Swiss lake racing specialist opponents won, reading the conditions with uncanny precision.

NORAUTO recovered a point in the next race, finishing second, leaving the two teams tied going into the final race. In this, Cammas explained: “We tried to push them in the start. We did better out on the right – that was good as we were ahead at the first tack. Realteam is very fast in these conditions, so it was good to stay in front.”

Cammas did his utmost to keep his GC32’s transoms pointed at Swiss bows, as his crew did ‘the wild thing’ – hiking to leeward. He finished in front, NORAUTO claiming its third GC32 Racing Tour event win of the 2018 season.

“I am happy to be in front, but it is never easy – in fact it is harder and harder compared with Lagos where we had more of a margin,” said Cammas.

Realteam is the defending GC32 Racing Tour champion, but here in Villasimius they had a new helm in Arnaud Psarofaghis, on loan from Alinghi and standing in for Jérôme Clerc, who is away on paternity leave.  “In the last race, we wanted to start well and do our own race. But they went to the right and got a good lead, on the safe side,” explained Psarofaghis. As to Realteam preferring the light ‘Lake Geneva’ conditions, he refuted this: “The team is really all-purpose. I’m very happy to have sailed with them.”

Skipper Loic Forestier added: “It’s been good – because we learned a lot and the team did well with Arnaud. We had a nice battle with NORAUTO in the final race, sort of match-racing… We started the day well, winning the first one, the second was harder because the conditions were trickier.”

A seventh from Zoulou in today’s second race, as Ben Ainslie’s INEOS Team UK claimed first place, caused Erik Maris’ team to drop from third overall. Maris turned this around winning the final race, but finished a point behind the British GC32.  “It would have been better if we had finished third,” said Maris. “But we gave them a good run for their money.” Maris did manage to win the Owner-Driver prize at the GC32 Villasimius Cup by a giant 17 point margin.

Ainslie was happier with today’s performance in what is only his second ever GC32 Racing Tour event. “We were back to windward starts and were starting well,” he said. In the second his black GC32 had been able to dart down to the line to find the optimum position. “It is a lot easier when you are out in front in clear air. We also had a nice start in the last race but the left didn’t work for us. We hung on enough to keep the third spot – after quite a battle it is good to be on the podium.”

One of the surprises of the day came in today’s first race for Argentinean Federico Ferioli’s crew on Codigo Rojo Racing, who having trailed the boats spotted some promising breeze out to the right of the second beat. After tacking, this fast-tracked them to the top mark, elevating them to second place behind Realteam, a position they maintained until the finish.