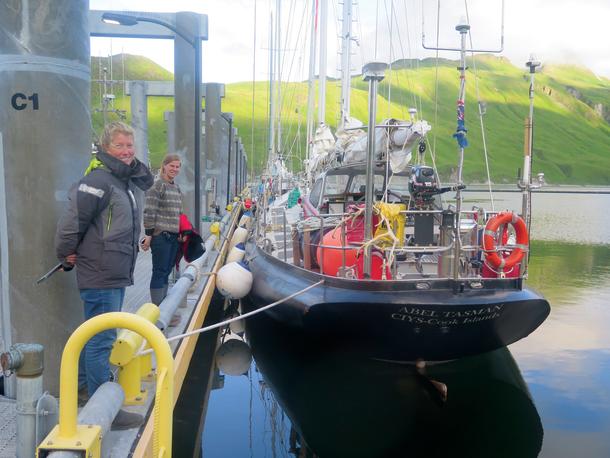 Since July she has clocked another 7,155nm from Dutch Harbour in the Pacific Ocean’s Aleutian Islands, through the Arctic Ocean’s notorious Northwest Passage to the Atlantic Ocean then onto Greenland and Norway.

Abel Tasman is a 23 metre Bermuda schooner derived from the elegant lines of America 1 which was designed by George Steer. Abel Tasman, with her clipper bow and tumblehome sides, was built in 1981 in Westerbroek Netherlands and is skippered by Antarctic and Arctic expedition support vessel operator, Roger Wallis. Abel Tasman’s steel hull is ten millimetre below the waterline and 8mm above, which makes her ideal for passage making in high latitudes.

After knocking off Abel Tasman’s job list we were ready to leave Dutch Harbor Unalaska, putting to sea with the niggling knowledge that the original Aleut name for Unalaska: ‘agunalaksh’, meant “the shores where the sea breaks its back”.

Motoring north, away from the Aleutian Islands in an increasing headwind, the disappearing coastline bore scars of an interminable battle between land and sea. As legend has it, colossal tides and tsunamis chomped beaches away and modified island profiles in a single storm-lashed night.

The treeless, snowed capped velvety mountain range, complete with an erupting volcano, slid steeply into Unalaska Bay where humpback whales breached and orca fins cruised menacingly among tubby wave-tripping puffins. Ahead of us was the Bering Sea and it had our full attention and unrequited respect.

We had made friends with Rick, a local crab fisherman, who successfully submersed us in tales of Bering Sea wrath, “it’s the breeding ground of summer hurricanes; the Aleutians are the windiest place on earth; seven lives were lost this spring; icy Siberian winds slice into the moisture-laden air of the warm Japanese current and incessant lows are born to shoot eastward along the Aleutian Island chain,” warned Rick with his partner, Dr Anne Norah, empathetically sidetracking the conversation to thrilling tales of island medi-vacs.

While preparing to leave, we had a taster of capricious Aleutian weather: one minute deathly cold and calm; the next, wind shrieking through the rigging and fenders compressed to popping tolerance. Low moist clouds descended over the landscape like a magicians wafting drape, followed by the ephemeral covering being whipped away in a flourish to reveal snow-capped peaks bathed in blazing golden sunshine.

We were well-nourished and rested for whatever lay ahead; locals had shared their homes, hot tubs, Halibut, reindeer, smoked salmon, herring, weather reports and books with us.

Roger had taken off to Canada’s east coast to move his yacht, Philos. Abel Tasman was like a Christmas tree of “what if”, “how to” and “when-to-do-what” notes that I had stuck on the engine, generator, bilge pumps, electrics and hydraulics.

Whales cruised along the coast, sea otters tumble-turned on the water’s edge and prolific numbers of huge bald eagles circled and soared above us.

A couple of eagles relaxingly perched on our spreaders for a few hours. Signs around town alert pedestrians of head talon-clawing eagles who earnestly protect their summer fledglings. A step up from swooping magpies!

A headline in the Bristol Bay Times declared: ‘Eagle takes down and drowns $6,000 internet firm’s drone’! Also interesting are the ‘Run this way’ tsunami signs featured along roadsides!

On land not a single stem of vegetation grows above my knees and most looked like Australian weed species so, after a 22 year botanical career, I tried to appreciate them afresh in its natural environment. The Aleutian diversity of humanity was also great: Vietnamese, Samoans, Intuits, Philippinos, American Indians, Hispanics, Americans, Russians, Canadians and a small mix of far-flung yachties.

So, into the notorious Bering Sea we sailed, destined for Nome: 727nm beyond a partition of thick fog that sat soddenly on a blotted grey sea.

How much can I say about the colour grey? A steel grey sky merging with a mashed up deep grey sea, hemmed together by a fluffy grey horizon wafting a mere sprinting swimming distance from our hull. Abel Tasman, a tossing yacht within its private lumpy grey bubble, day after day making its way over the Bering Sea without a compass, which way would be which?

Despite the wind, precipitation and greyness, we motored and sailed, reefed and unreefed, trimmed and tweaked, read, sewed, knitted, wrote and made miles. No scurvy for us with a stash of hearty cold weather comfort food.

As luck would have it, we could not have picked a better five-day weather window for the passage; one that Bering and his crew would have relished to allay their privation and ordeal by greyness and weather.

Five days of gluggy fog was broken by one “Jesus is a-coming, hallelujah” shaft of sunshine, an overtaking Minkie whale, mapping petrels and mutton-birds and the odd solo puffin before we were delivered to the gold sieving town of Nome.

Its endearing name does not celebrate cute ‘missing person’ gnomes, just a mapmaker’s misspelling of a British Officer’s chart notes describing an ‘unknown’ peninsula. Or, as I prefer to think, a derivation of an Inuit phrase:
“I don’t know”, pronounced “knome”. ≈