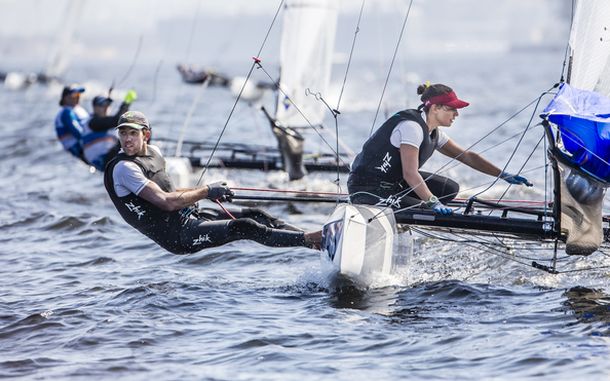 It was another big day (Monday, 17 August 2015) for the Australian Sailing Team at the Aquece Rio – International Sailing Regatta 2015 in Rio de Janeiro, Brazil with the full Australian contingent of six crews on the water.

Cousins Jason Waterhouse (NSW) and Lisa Darmanin (NSW) had another consistent day and moved up into third place in the Nacra17 making them the top ranked Australian Sailing Team crew.

Olympic gold medallists Nathan Outteridge (NSW ) and Iain Jensen (NSW) moved up one spot into fourth, while Mat Belcher (QLD) and Will Ryan (QLD) dropped from their early lead on day one into sixth overall with only five points separating them from leader USA. Laser World #1 Tom Burton won the one and only Laser race of the day, catapulting him up into overall seventh after a total of five races across three days.

It was a day of challenging conditions all around with wind conditions not playing along with a smooth schedule. A dying breeze on the courses located outside the bay meant long waiting times for the Laser, Finn and 49erFX before the fleets were finally moved inside the Bay in the afternoon to be able to get some races in. Laser, Finn and 49erFX were not able to start racing until 15:30 and in the end fading daylight became the issue with racing cut short.

Day three of the Aquece Rio– International Sailing Regatta 2015, once again saw the whole Australian Sailing contingent take to the Olympic waters with four boats finishing the day in the top ten. It was the third day of competition for the Laser and the second day for all other Australian crews.

It was a tricky day two for Olympic gold medallist and five-time World Champion Mathew Belcher together with dual World Champion crew Will Ryan with a variety of challenges thrown at the Men’s 470 fleet on the Escola Naval course.

“We were on the Naval Escola Course today and that’s notoriously one of the trickier courses. There’s a lot of current across this course and the day was really tricky with the current and the breeze as well,” Will Ryan said.

“I wish I could tell you what was going on, our results show we didn’t really have a full grasp of it. We raced well, hard and it was bit of luck at times, but hopefully we’ll figure it. We’ve got a year to do it.”

After kicking-off the event in the lead after Sunday’s two races, they added an eighth and seventh to their tally and sit in overall sixth after four races with only five points separating them from the first ranked U.S. boat.

Australia’s Nacra17 team of Jason Waterhouse and Lisa Darmanin, silver medallists at the recent Nacra17 World Championships, put in a strong performance to finish their second day in overall third.

Fleets are racing on different courses throughout the event and the Ponte (Bridge) course made for another interesting day and some valuable lessons for the pair as crew Lisa Darmanin said:

“We were on a different course than yesterday. They keep changing it up and keep making it interesting. And it was very interesting out there. We couldn’t really be sure was going on but we were sailing really well and were making the best decisions that we could.”

“People were seeing things that we couldn’t see so we didn’t have the greatest day but it was still a consistent day. We got a five, six and a two, which we are really happy with. Consistency really pays off, so it’s good to keep the numbers low.”

We have a reserve day tomorrow, I have the momentum going but I will just have to stay calm and we’ll give it another go in two days time.”

On Sunday, the 49er fleet only got two races in instead of the scheduled three when they ran out of day light and as consequence had four races on Monday.

After an overall fifth place on Sunday, Nathan Outteridge and Iain Jensen started the day out strongly on the Medal Race course, Pão de Açúcar, by finishing third and also ended the day with a second place. Another eighth and 14th place in race two and three moved them up one spot into overall fourth. Racing arch-rivals Peter Burling and Blair Tuke from New Zealand posted three bullets and put 18 points between them and Australia in fourth.

“It was a pretty tricky race course out on the Medal Race Course. It was up and down with snakes and ladders everywhere. We did a pretty good job of keeping towards the front, but we have to up our game a bit over the next few days to reel the leaders in. We’ve got a day off tomorrow, we’re only half way through the event and there’s a long way to go,” said Nathan Outteridge.

And talking through the race day he added: “It started off pretty well for us, running second in the first race and dropped one spot just at the end to finish third. We had a good start to race two of the day, but there was massive current just at the top mark and we touched the top mark and had to do a penalty turn. In doing our turns we dropped from about fourth to 18th, but did a good job to peg back into eighth.

In race three, we tried to punch through on Port tack because we thought it was going to be pretty heavily right favoured with the current change, but we didn’t quite make it through the gap and spent most of the race in the middle of the pack, fighting it out. Finally, in the last race we had another good one. We led around the top mark and unfortunately, Pete and Blair just got through us just near the top mark on the last beat.”

It was a long day for the Laser fleet, who were scheduled to race on the Pai course outside the bay at one p.m. but with a dying breeze were moved inside the bay in the afternoon instead.

It was the third day of racing for Laser World #1 Tom Burton and after a couple of challenging race days he was happy to finally get a race win in. This catapulted him from 14th into 7th place overall.

“It was a long day. We were on Pai course today, so we left the beach early as it is a long way out there, around a 50 minute tow. There was no wind when we got out there, absolute glass, so we were just going up and down in the sea state and I actually started to feel sea sick. We did that for two or three hours before we got the call to come in,” Tom Burton described the day.

“There was good breeze inside the harbour so some of the fleets there just smashed their races out before we were coming in so we got the course. We had one race on the Naval course and it was pretty tricky to go from sitting around doing nothing to straight away start racing when we got in there. It was pretty tricky with the tide and the shifts but it was good to finally get a good race in.”

With this result as well as the news of the arrival of a baby girl for Australian Laser coach and Olympic medallist Michael Blackburn, it was all smiles for Burton:

“I just want to say congratulations to my coach Michael Blackburn with a newborn baby girl Savannah – the reason he went home a few days ago and is not here with me at the moment.”

The Finn and 49erFX classes also only got one race. Jake Lilley (QLD) posted a tenth place and sits in overall 13th after three races. In the 49erFX, Olympic silver medallist Olivia Price stayed in 16th after posting an eighth place today. Price is competing at the Test Event in partnership with Jaime Ryan (QLD), who fills in for her injured regular crew Eliza Solly (VIC).