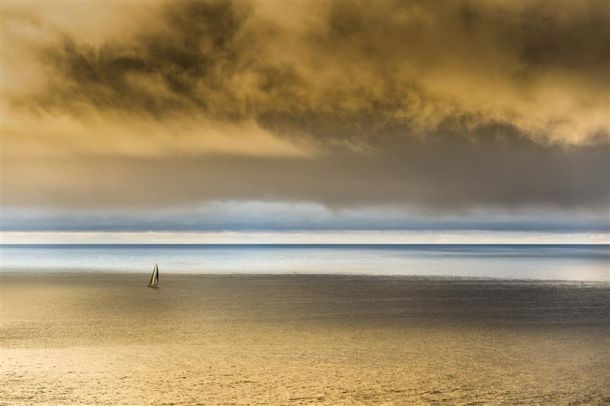 19/08/2015
First arrivals in the Rolex Fastnet Race are due into Plymouth in the early hours of Wednesday morning. But the only records likely to be broken in this 90th anniversary edition of the Royal Ocean Racing Club's flagship 603 mile offshore race will be for slowness.

The opportunity to better the multihull record, set by Spindrift 2 in 2011 in her original incarnation as Banque Populaire V, came and went on Monday night at a time when Dona Bertarelli and Yann Guichard's 40m trimaran was just past the Fastnet Rock. This afternoon Spindrift 2 had passed Bishop Rock and was involved in a match race with the Multi80 Prince de Bretagne, skippered by two time Route du Rhum winner Lionel Lemonchois, which momentarily pulled ahead of her bigger rival as they passed south of the Traffic Separation Schemes off the Scilly Isles.

Similarly the chance to break Ian Walker and Abu Dhabi Ocean Racing VO70's monohull race record, also set in 2011, came and went at around 0700 BST this morning, at which time Jim Clark and Kristy Hinze Clark's on the water leader, the 100ft Comanche, was parked just beyond the Fastnet Rock Traffic Separation Scheme.

As Comanche skipper Ken Read reported: “We sat there for exactly four hours not moving – I know that because it was almost to a minute the duration of my watch! We had a little westerly-going current early on and some easterly current for the last hour and a half and we zigzagged back and forth with the current waiting for the breeze to fill in.”

Read said that he was not surprised that Dieter Schon's Maxi 72 Momo had managed to make severe inroads into them early this morning – it was all part of the normal offshore racing 'yoyo'. “If we run into a parking lot then everyone can catch us up. Fortunately at other times we get to stretch our legs – like we are doing right now.”

Saying that, Read observed that George David's Rambler 88, although a slower boat, was coming in from behind with increasing pressure. “The further ahead you are, right now, the lighter it is.”

This afternoon Comanche was doing an admirable job fending off the ever advancing Rambler 88, still six miles astern, the two boats having pulled away once more from Mike Slade's Leopard and Momo. But Read was most impressed by the massive gap of 120 miles that has developed behind Momo to the next group, currently led by Paul Meilhat and Michel Desjoyeaux on the leading IMOCA 60 SMA, that mid-afternoon still had 63 miles to go to the Fastnet Rock.

Since this morning a new southwesterly breeze has been filling in from the southwest of the Celtic Sea and with this the smart boats have been heading to the left side of the race track. The three Class40s: Les Conquerants de Normandie and the German boats Red and Nivea, followed by the Dutch Farr 45 People, of the Zeezeilschool Scheveningen, had all taken this approach and mid-afternoon were on course to the Rock, making 7 knots.

A few brave crews have taken the 'cruising route' sailing through the Scilly Isles, led by the French First 50 Warhorse of Nicolas Gourio.

But the majority of the fleet have launched onto the giant yachting motorway, running northwest from the east side of Scilly Isles direct towards the Rock. The westerly or west-southwesterly breeze has filled in ahead of the front that is due to arrive over the Celtic Sea tomorrow and the leaders in this group were this afternoon making 2015 Rolex Fastnet Race record speeds of 10-12 knots with more to expected tonight – a reprieve from the largely Doldrums-like conditions since the start.

Among this group are some stand-out performances, particularly the Andy Greenwood-skippered 2002 generation former IMOCA 60 Rosalba (ex-Hexagon, Pindar 1, etc), racing in the IRC Canting Keel class, which, after taking the westerly route around the Land's End TSS, is now ahead of many of the fastest contemporary IMOCA 60s that took the easterly route round the TSS. She is even ahead of the sleek tricked-up Botin 65, Caro, of German Maximilian Klink, sailing with a crew peppered with America's Cup and Volvo Ocean Race legends.

Just north of the Scilly Isles and in the middle of the Celtic Sea 'rush hour traffic' was Admiral of the RORC Andrew McIrvine and his First 40, La Réponse, which mid-afternoon was making 5 knots, in about the same amount of wind.

La Réponse suffered last night by going in towards the Cornish coast yesterday, falling into a wind hole and then trying to extract herself with the minimum pain. “Elke, a Dutch First 40, took a much longer tack and they're looking fairly good, the furthest left at the moment,” recounted McIrvine this afternoon. “Last night we did very well, we put up the code 0 coming to the Lizard and we overtook a lot of boats, but there was an incredible number of boats going between the Lizard and Penzance, nearly the whole fleet was bunched up there.”
As to La Réponse's present situation, McIrvine reported: “You wouldn't believe how many boats there are around here at the moment – it's like the Round the Island Race, we can see at least 100 boats. I gather nobody is that far up ahead, so it's astonishing – really, very strange.” Around them at the time were the old IOR Maxi Bristolian, which La Réponse was leading, while Ross Applebey's Lightwave 48 Scarlet Oyster was around four miles ahead.
Looking ahead McIrvine said he was expecting the wind to veer into the west before backing into the southwest again. He was expecting La Réponse to arrive at the Fastnet tomorrow and at the finish on Friday.
– James Boyd