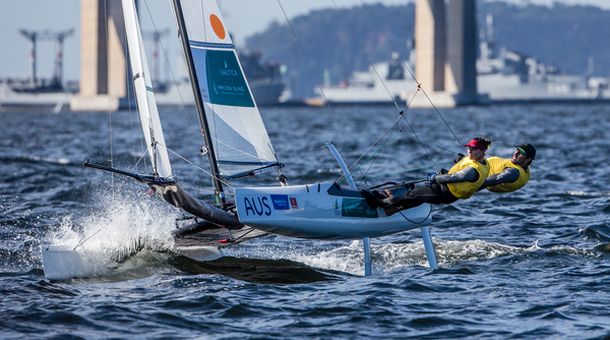 Australian Sailing Team’s Jason Waterhouse (NSW) and Lisa Darmanin (NSW) have defended their lead in the Nacra17 at the Aquece Rio – International Sailing Regatta 2015 in Rio on Thursday, 20 August 2015 and will carry their yellow leader’s jersey into Friday’s Medal Race.

Medal Race in the Men’s 470 and Finn classes are scheduled for Saturday and Olympic gold medallist Mathew Belcher (QLD) and Will Ryan (QLD) will go into the last day of fleet racing ranked second, only one point off first place after winning two out of three races on Thursday.

Also in medal position ahead of the first round of Medal Races at the Olympic Sailing Test Event is Laser sailor Tom Burton (NSW) in third place. Olympic Gold Medallist Nathan Outteridge (NSW) and Iain Jensen (NSW) complete the Australian contingent in the top-ten Medal Races scheduled for Friday local time (21 August) and are ranked sixth after a challenging day and have only a slight chance left to get on to the podium.

It was a full day of racing for all Australia Sailing crews and a great day for it with a front during the night bringing in the long awaited wind which allowed most fleets to catch up on racing.

Mat Belcher and Will Ryan had strong day winning two out of three races and moved up from seventh into second place. As a consequence they were able to drop their high score from Wednesday when they were disqualified after crossing the start line early. They are now back in the hunt for the gold medal with another two races to go before the top-ten Medal Race on Saturday.

“We made it pretty tough for ourselves in the first part of the event and today was really a day where we had to get some pretty good scores and make as few mistakes as we could,” Mat Belcher said about the challenges of the day.

“Out there was a lot lighter than we expected. We didn’t get above 13 knots, where the forecast was up to 20. It was really shifty with quite big waves and we just tried to race as well as we could and fight for every point. We had a third and two first places, so it was a really good day for us and we’ve caught back up a bit to our competitors. There’s two more races to go and a lot of work to do.

It will be a tight battle in the final Medal Race in the Nacra17 fleet but Jason Waterhouse and Lisa Darmanin were able to extend their lead by another three points. After eleven races they are ranked first, five points ahead of the second ranked Dutch team.

It was a tough day for the cousins on the Bridge (Ponte) course but another series of consistently low results including two fourth places and an eighth, secured them the yellow jersey into the top-ten, double points Medal Race on Friday, 21 August local time.

“We had three races out there today and it was really tricky. That was really tough and I’m exhausted, Lisa is exhausted. It’s been a big week and that course was a nightmare. It posed lot of opportunities and snakes and ladders and we did the best we could,” Jason Waterhouse said.

“We achieved our goal to extent our lead going into tomorrow’s Medal Race. It’s going to be really tight and I would have liked it to fall a bit better today but at the end of the day we could only what we could do. But obviously we are really happy going in with a lead. It will be a tight finish and I think we really want this gold. So we’ll sail really fast and do the best we can.”

Racing had been cancelled for the 49er fleet on Wednesday and with only six races completed over five days, four races were scheduled on Thursday.

It was a tough last day of racing in the 20-boat fleet ahead of Friday’s Medal Race. It did not go as planned for Nathan Outteridge and Iain Jensen. The pair dropped from fourth into sixth after posting a 13th, fifth, eighth and ninth place across the four races. They now sit in sixth place with a gold medal out of reach and a podium spot 14 points away as Iain Jensen explained:

“We had a bit of tough day today. We had four races, in maybe 10-18 knots and didn’t get the shift right all the time and every now and then we were a little bit out of phase with the fleet. Some of the guys who were around us had a really good day, which now makes it hard for tomorrow (Friday).”

“We are back into sixth and I think we are 14 points off the medals, so we can still mathematically make a medal in this regatta, but it’s going to be a hard thing to do from here. We’ll approach tomorrow as a new day and hopefully we can improve tomorrow and get a good result.”

Two races were completed instead of the three scheduled in the Laser fleet on the offshore Niteroi course, with Tom Burton winning the first race and posting a 15th place in the second.

This moves Burton into third place overall going into the Medal Race, tight on points with Frenchman Jean Baptiste Bernaz in fourth and three points behind second ranked Tonci Stipanović from Croatia. Italian Francesco Marrai tops the ranks sixteen points ahead of Burton.

“It was another long day. We left on time and we thought everything was going to be good, but when we got out there, there wasn’t that much breeze. We sat around for a little bit. It was very shift and it pretty much died after two attempts at starting. Finally the breeze came in from a different direction, so they had to move the race course, which took a bit of time again,” Tom Burton said about his day.

“The first race was really good. I had a nice start, nice first beat and was second around the top mark and ended up winning that race, which was really nice. In the second race it was starting to get a little late in the day and the breeze was a little bit trickier. It was probably my best start of the regatta and I just went the wrong way and there was a 20-degree wind shift the other way. This put me very deep. I had an alright come back to save me some points going into the medal race tomorrow, but I think it’s still going to be tight on points. I’m close to a medal and a lot of the other guys are too, so tomorrow will be a ‘need to perform’ day.

The 49erFX with Olympic silver medallist Olivia Price (NSW) and crew Jaime Ryan (QLD) had a strong first race finishing third. But the second race was a challenging one with only three crews finishing the race before the time limit expired with the Australian’s becalmed close to the finish line. With a 17th place in the third race of the day the pair finished the day as well as the event in overall 14th.

“Well today was definitely what we would call “tricky”. We had two races on the medal course and then the breeze completely crumped out and the majority of the fleet got DNF’d in that second race, because the time limit expired. We then moved out to the Naval course and did one race out there, but it was again a dying breeze that made it extra tricky,” Olivia Price said about the race day.
And about the event as a whole she added: “There’s so much to be learned on these race courses. We’re glad we got to see two of them today and the broad scale weather system, rather than just a sea breeze, so again more information to take away from it. We’re really glad we got the opportunity to come and see Rio.”

“It’s the end of the regatta for us and Jaime and I are both stoked to have come here and see everything. I can’t say thank you enough to Jaime for stepping up and being part of the FX team. We’ve both enjoyed it and we’re looking forward to the next time we both get to race here, hopefully in our normal combinations.

Price competed at the Test Event in partnership with Jaime Ryan (QLD), who filled in for her injured regular crew Eliza Solly (VIC).

In the Finn class, Jake Lilley (QLD) continued to climb up the results ladder and moved from twelve into overall tenth after posting two fifth places and a 15th across the three races.

“I had two better races today, with two fifths and a not so good one in the middle, with a fifteenth. Overall, I’m pretty happy with the day and looking forward to tomorrow. We’re going to be on the Naval course with two races and that should decide a lot of things,” Jake Lilley said.

“Also, it was pretty cool, we saw a shark out there way offshore. We don’t see much living marine life here inside the harbour. So to see a shark, that was the highlight of today for sure!”

Friday is also the last day of fleet racing for the Men’s 470 and Finn classes with two races scheduled across both fleets from 13:00.