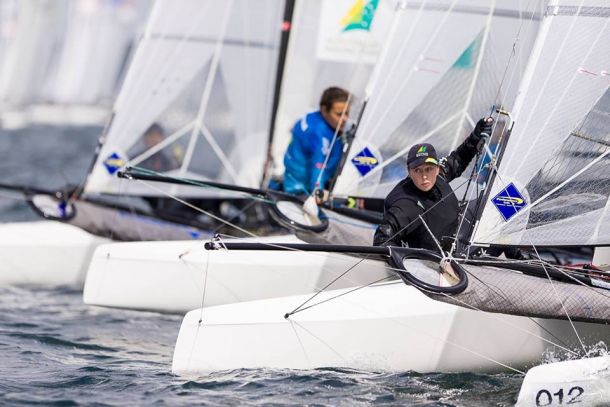 Three races were held at the Nacra17 Worlds‬ in Aarhus on the second day, which concluded qualifying series.

The day started out with another tricky breeze and gusty and unstable conditions for the blue fleet for the first 2 races, which became more stable by the 3rd race. The sun came out and Yellow fleet had windier consistent conditions for their 3 races.

“It’s been very tough racing out there for us, but it was great to start on time and get some racing in. We got a bit caught out in the first race of the day getting out of phase and there was so much going on, one boat length too far or too early and you could lose 10 boats! We kept our cool and sailed a smart second race but were kept on our toes the whole race. In the last race the wind shifted and we had a bit more consistent breeze,” said Lisa Darmanin.

“We had a great start yesterday and it was a tricky day out there for us today, but we are content with where we are placed leading into gold fleet. The French have extended their lead but the windy forecast means anything can happen, so hopefully we can get some good final series racing in, sail well and push hard to make it back up the leader board.”

Lots of wind is forecast for the next two days with gale force expected on Thursday.