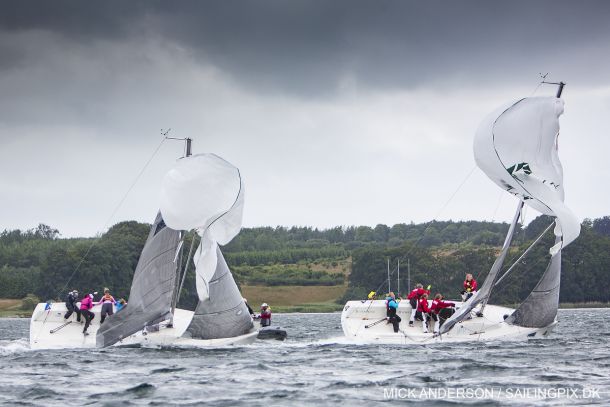 Local hope Lotte Meldgaard and French Anne-Claire Le Berre are the only undefeated skippers after the opening day of the 2015 ISAF Women’s Match Racing World Championship, the first event on the 2015 Women’s International Match Racing Series (WIM Series), in Middelfart, Denmark. Both scored 8 – 0 on a long and very action-packed Wednesday: “Even with one reef in the main and a smaller jib replacing the genoa, the Match 28’s we’re racing here are quite overpowered. We lost control a couple of times, but excellent crew work got us back on track again,” Meldgaard comments.

Just a few weeks after summer solstice, the still light but not very bright Scandinavian Wednesday evening helped event organizer Match Racing Denmark get 14 flights of four matches each in, when the 2015 ISAF Women’s Match Racing World Championship kicked off. The opening day offered truly challenging conditions for the competitors as well as for the race management. Gusts approaching 30 knots swept down the course, leaving broaching boats, freely flying kites and wet and exhausted sailors behind: “It’s been a tough day at the office, no doubt about that” event manager Sören Laugesen smiles, revealing that a couple of spinnakers have had to be sent to the sailmaker, one of which with a hole bigger than Sören himself is tall.

World # 4 Anne-Claire Le Berre from Brest, France, managed the tough conditions in an excellent way, winning all her eight matches of the day. At nine o’clock in the evening, in the 14th and last flight, Le Berre completed her perfect day with a victory over Katie Spithill, who had spent 32 hours travelling from her home in Australia to get to this World Championship: “We left home because it was so cold, but this is certainly not better,” the Aussie says, a little bit disappointed with her 5 – 3 score and an 8th place so far in the round robin.

Reigning World Champion and World # 1 Anna östling, Sweden, didn’t lose a match until the very last flight against Milly Bennett, Australia, but experienced tight racing with a lot of lead changes during the day: “We haven’t gone through the day without mistakes, but I don’t think we’ve done as many as our opponents. It was good for us to get several tight matches today, since we’ll need to shape up before meeting the higher ranked sailors at the end of the round-robin,” says östling.

The racing in Middelfart continues with the round-robin Thursday and Friday, while the weekend will see the exciting knock-out rounds to crown the World Champions.