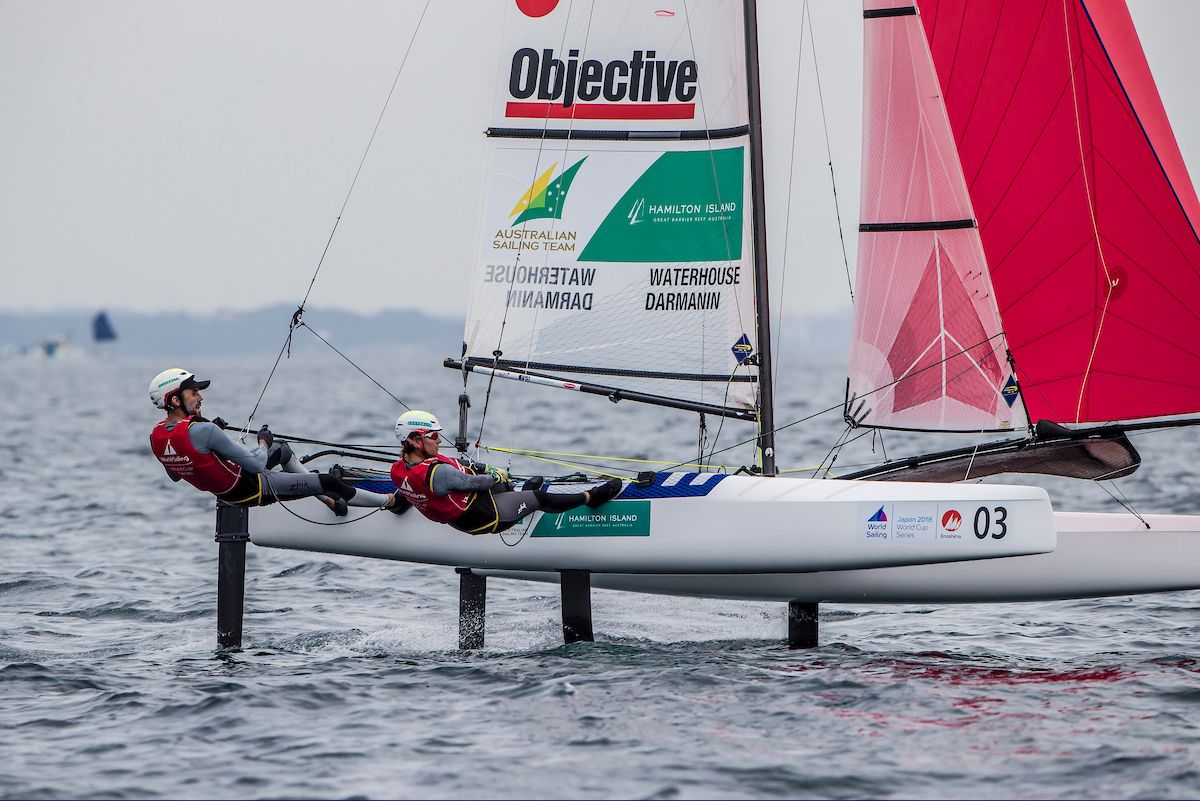 Enoshima, the Tokyo 2020 Olympic Sailing Competition, threw a new challenge at the 466 sailors from 44 nations racing at the 2018 World Cup Series Japan Round on Thursday as a light, testing breeze danced across Sagami Bay.

Global sailing venues can quite often be renowned for catering for strong sailors with big winds or for lighter, tactical athletes in weaker breeze – but in Enoshima, the competitors recognise that it will take a good all-rounder to conquer on the Olympic waters.

Following two days of consistent 12-17 knot northerly winds, the fan was turned down a notch with 5-8 knots, which then decreased to 3-4 knots. However, out of the ten Olympic fleets, only the Radial failed to complete a race.

Giles Scott (GBR) has made an almost seamless return to the Finn fleet and after six races in varying conditions, he holds the lead.

Scott is making his first appearance in the Finn fleet for six months after an absence to concentrate on the British America’s Cup campaign. However, judging by the way he has controlled the 21-boat fleet, many observers would think he had never been away.

“It feels great to be back,” he commented. “The last bit of racing I did was in Palma [in March] and I haven’t done too much sailing since. It’s nice to be out here racing again.”

Scott won both of the Rio 2016 Olympic test events, giving him confidence to achieve Olympic glory, and he admitted he’s in Enoshima to give him the first boost on the Tokyo journey, “I chose this event over going to Aarhus this year for that reason. My program is geared more to the Olympics, so I have to pick and choose which events I do, and this is an obvious one for me. It’s great to be here.”

In the stronger breeze the days prior, Scott recorded a 6-1-2-6. Thursday’s light winds tested him as he sailed to a tenth, which he discards, but he quickly bounced back with a second.

“You’ve got to be an all-rounder here, I think,” commented Scott on the key to Enoshima success. “We’ve been here for two weeks and while the event has been on for a few days, we’ve had some shifty offshore conditions, but earlier on we had big seas and big winds as well as some light stuff.”

Scott is in top spot on 17 points and is followed by Nicholas Heiner (NED) on 20.8 points (the .8 arose from a discretionary scoring penalty applied to his races on day one related to hull weight) and Jorge Zarif (BRA) and Ed Wright (GBR) on 23 points each.

Heiner and Zarif both played down the return of Scott, instead taking their time to speak about the strength of the fleet at large.

Heiner commented, “He [Scott] is undefeated but he is never there so you can’t really beat him most of the time. All the top sailors are here so it’s great to sail with these guys again, not the biggest fleet but the same as the Olympic games, so you really feel it more.”

Zarif added, “It’s an honour to be competing against these guys. We have Josh [Junior (NZL)], Ed, Giles and Nicolas who are at top of their game. It’s nice to be in the mix with them.”

With a blend of strong onshore winds one day to offshore tricky breeze the next, as Scott stated, it takes a sailor with strong and light wind expertise to conquer in Enoshima.

After racing, Shaw was pleased with the work she’s put in to prepare, “In these conditions, windsurfers have to sail more on their fin and that’s something I’ve been working hard on since the World Championships. I am happy that I’m improving on that.

“It’s important you sail well in the mixed conditions yet keep your performance consistent throughout races.”

Chen won the day’s opening race but could only follow up with a 13th, which she discards. 2018 World Champion Lilian de Geus (NED) is third overall and the day’s other race win went to eighth-placed Hongmei Shi (CHN).

There were some mixed scores in the Men’s RS:X but Kiran Badloe (NED) held on to his lead. The Dutch sailor came through in 17th in the opening race of the day before hitting back with a fourth to sit seven points clear of Mattia Camboni (ITA).

Switzerland’s Mateo Sanz Lanz moved up to third from sixth after a race win and a ninth.

Benjamin Bildstein and David Hussl (AUT) stormed into medal contention in the 49er with an expert day of racing. As many around them racked up some high scores, the Austrians snapped up two race wins and a sixth to propel themselves up to fourth from 12th.

Great Britain’s James Peters and Fynn Sterritt held on to their overnight lead after some high scores but Lukasz Przybytek and Pawel Kolodzinski (POL) drew level after a 4-5-8 scoreline.

Dylan Fletcher-Scott and Stu Bithell dropped from second to 11th after a 19-19-22. Their discard is a 23rd from the second day, so they count all the scores.

The 49erFX followed the 49er fleet on the Enoshima racing area in a dying afternoon breeze. A single race was completed and overnight leaders Martine Grael and Kahena Kunze (BRA) snapped up the victory.

Many of their nearest rivals stuttered and they lead Charlotte Dobson and Saskia Tidey (GBR) by 26-points.

The leading Laser sailors are starting to find medal-winning consistency. The top five all posted a top ten finish in the single race of the day and Elliot Hanson (GBR) held on to his lead following a third. Sam Meech (NZL) snapped up a sixth and is second. Nick Thompson (GBR) follows in third after finishing the sole race in second behind Lorenzo Chiavarini (GBR).

The Laser Radial fleet were unable to complete their race in unstable conditions, ensuring the overnight points remain. Alison Young (GBR), Marit Bouwmeester (NED), Josefin Olsson (SWE) and Sarah Douglas (CAN) are split by three points at the top.

The Japanese Men’s 470 have shown no signs of slowing on their home waters, with four teams in the top five. Only Mat Belcher and Will Ryan (AUS) separate the Japanese in second.

A discarded 12th and a second allow Keiju Okada and Jumpei Hokazono (JPN) to hold onto their overall lead on 12 points. The Australians follow on 25, with Daichi Takayama and Kimihiko Imamura (JPN) on 29, Tetsuya Isozaki and Akira Takayanagi (JPN) on 36 and Kazuto Doi and Naoya Kimura (JPN) also on 36.

There is no separating Benedetta di Salle and Alessandra Dubbini (ITA) and Afrodite Zegers and Anneloes van Veen (NED) in the Women’s 470; the teams are locked on 21 points apiece.

Poland’s Agnieszka Skrzypulec and Jolanta Ogar are five points back in third, while Amy Seabright and Anna Carpenter (GBR) and Mengxi Wei and Haiyan Gao (CHN) won the day’s races.

The Italians’ 4-6-12 saw them surrender points to the Australians, who discard their eighth and count their first and seventh. Tita and Banti lead on 27 points, followed by the Rio 2016 silver medallists on 32. Vittorio Bissaro and Maelle Frascari (ITA) are on 38 points in third, one point clear of Nathan and Haylee Outteridge (AUS).

Friday’s racing will be the final day of fleet racing for the RS:X fleets, the 49er, 49erFX and Nacra 17 ahead of their Medal Races on Saturday. Racing resumes at 12:00 local time.