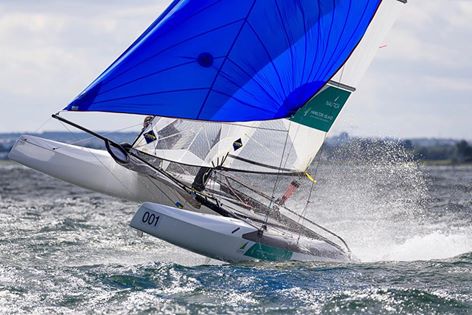 The 2015 Nacra 17 Worlds kicked off in windy conditions at Aarhus in Denmark and the “usual suspects” were at the top of the leaderboard.

Billy Besson and Marie Riou (FRA) have dominated the class since its inception and they began the defence of their title with a win and a second place, leaving them tied at the top with Vittorio Bissaro and Silvia Sicouri (ITA). Jason Waterhouse and Lisa Darmanin (AUS) are chasing their second podium, after finishing thirs last year in Santander. They had a race win and a third to be just a point behind the leaders.

Of the other Australian crews, Darren Bundock and Nina Curtis sit in 9th place with scores of 4th and 8th while Euan McNicol and Lucinda Whittyare 15th (9,6) and Paul Darmanin and Lucy Copeland are 35th (21,16).

Here's the event report from Denmark:

In stark contrast to yesterday’s calm and sunny weather which kept the sailors ashore for the entire day, today’s weather threatened the sailors with another day on land with a wind speed of up to 30 knots and wind gusts even little higher.

The wind calmed down a little after noon and the sailors were sent out for the first qualification races at this year’s Nacra17 Worlds. The capricious Danish weather offered abundances of wind and challenging situations for both the yellow and the blue Nacra17 fleets. Both fleets sailed two races.

The first fleet in today’s qualification race – the yellow fleet – was challenged by capsizes and collisions due to the strong wind gusts, however, many of the favourite teams managed to keep the skin on their noses and finish their first two races with flying colours.

The French super duo, Billy Besson and Marie Riou, defending their title, had a brilliant start ending second and first in the first two races. The Danish Rio 2016 favourites and winners of the 2015 Delta Lloyd Regatta, Allan Nørregaard and his crew Anette Viborg, managed to steal fourth place with a 6th and a 4th place.

Third place was conquered by the excellent New Zealand team, Gemma Jones and Jason Saunders which must be considered as quite an accomplishment taken in to consideration that the helm Gemma Jones just came back from an injury.

The blue fleet faced more or less the same challenging conditions as the yellow fleet earlier today. The Italian team, Vittorio Bissaro and Silvia Sicouri, who ended up 4th at this year’s World Cup in Hyeres, excelled in today’s qualification races. With a 1st and a 2nd place in the two races, they conquered 1st place in the blue fleet and are now 2nd overall.

The Swiss team, Matias Buhler and Nathalie Brugger had a flying start ending up 2nd and 3rd which earning them 3rd place in total. Nicole van der Velden and Thijs Visser, sailing for Aruba won the second race in the blue fleet, after which they capsized and unfortunately broke their mast. With a 12th place they are starting in the yellow fleet tomorrow which gives them some time to repair their boat and be ready for the next three scheduled qualification races.