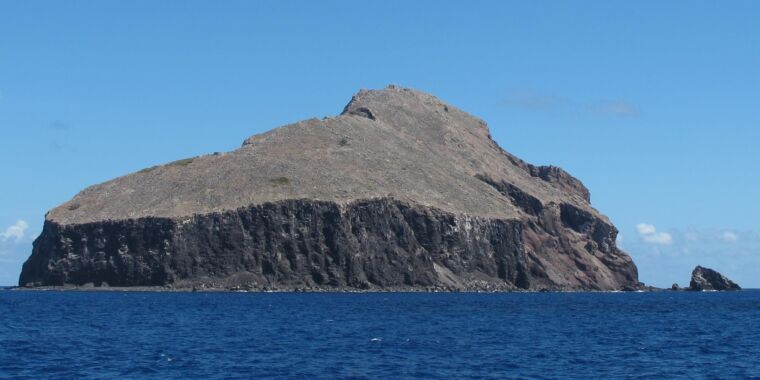 Hundreds of years ago, Europeans were sailing the globe and “discovering” new parcels of land—and rats came along with them as stowaways. As crews made landfall on many islands, rats hopped off and made themselves new homes.

The rats prospered, out-competing, eating, or otherwise driving off native species, and fragile island ecosystems suffered. However, new research suggests that these remote, isolated ecosystems can bounce back relatively quickly after conservation groups eliminate the rats, a practice that is becoming increasingly common. And the changes caused by the rats’ removal are even felt in offshore ecosystems.

Rats are not picky when it comes to food. They’ll happily chow down on fruit, seeds, nuts, insects, and almost anything else they can stomach. This has a notable impact on the islands’ terrestrial habitats. But in a stark yet roundabout way, rats also harm marine habitats.

Seabirds—such as terns, boobies, and shearwaters—tend to make their nests on islands. Normally, they fly out into the ocean and catch small fish. Once they return home, they poop out huge amounts of guano, which is rich in nitrogen and phosphorus. When it rains, these compounds leach off the island and provide valuable nutrients to coral. These healthy reefs help fish grow faster; the fish in turn consume algae, starting a process that allows coral to settle and grow.

But seabirds tend to steer clear of islands with rats. The rodents will prey on their eggs and chicks, decreasing the birds’ raw numbers and discouraging them from nesting on an island. A 2018 piece of research, led by scientists from Lancaster University, showed the strange relationship between rats, seabirds, and coral. Seabird density was 750 times higher on islands without rats, so the islands’ reefs were also healthier.

“They basically decimate seabird populations,” Nick Graham, a professor of marine ecology at Lancaster University and one of the paper’s authors, told Ars. “Seabirds tend to avoid nesting on islands where rats are present as a result.”

However, new research from this team suggests that seabirds will quickly return to the islands after rats are removed. Once the birds are back to covering the terrain with their poop, the islands’ marine ecosystems begin to recover. According to Graham, removing invasive rats from an island benefits both the land and the sea.

“It’s really a win-win in terms of conservation,” he said.

For both this study and the previous one, Graham traveled to the Indian Ocean and took stock of what was happening on various islands within it. They surveyed the abundance of birds, fish, and coral and collected samples for isotope analysis to detect the nutrients in the systems. The team made its observations on 20 remote islands in the region, some of which never had rats. Others still do have rats, and a third grouping consists of islands that at one point had rats, but the rodents were removed sometime over the past 15 to 16 years.

According to Graham, the fish in these marine areas are recovering a bit more slowly, and it may take longer for these populations to reach their pre-rat health. But, he noted, the rats have been on these islands for many hundreds of years—some of them since the 1700s. “So the fact that we’re seeing these changes to the ecosystems, the flow of nutrients returning in such a short period of time, is quite impressive, quite surprising,” he said.

Removing rats from islands is not a new tactic—the Database of Island Invasive Species Eradications (DIISE) lists more than 800 instances where rodents (not just rats) have been eradicated. It’s a popular strategy, and it’s one that has been around for decades.

The group Island Conservation has successfully removed invasive species, including rats, from 64 islands in its 25 years of existence, mostly from the Pacific Ocean and near North and South America. According to Coral Wolf, the organization’s conservation science program manager, islands make up only 5 percent of the world’s landmass, but they house 20 percent of the world’s plant, reptile, and bird species.

Islands are also where the majority of extinctions occur—75 percent of all bird, amphibian, and mammal extinctions occurred on islands. And 86 percent of these extinctions are linked to invasive species. As such, removing intruders, including rats, is becoming an important tool for conservationists, Wolf said.

However, what happens after an eradication can be as important as the eradication itself. Island Conservation regularly monitors the islands from which it removes invasive species to ensure the pests haven’t returned. Because rats breed so fast, they can recolonize an island in quick order, meaning post-eradication monitoring is a particularly important aspect of the strategy. Similarly, the islands should have strong biosecurity measures in place to ensure that rats and other invasive species don’t get re-introduced. It’s easier to keep rats off islands than to eradicate them again, Wolf said.

Further, Wolf said that while the pace of eradications over the decades has increased, the existing methods available to conservationists are only feasible for 15 percent of the islands in which they are needed. Some of the islands are just too big, or their ecosystems are too complicated, she said. All the same, the kind of timeline for island recovery established by the Lancaster University paper is encouraging, Wolf said.

One recent eradication effort saw invasive rats—and goats—removed from the island of Redonda, a mile-long, volcanic island that is part of the Caribbean state of Antigua and Barbuda.

For years between the First and Second World Wars, the tiny island was mined for guano to make fertilizer and gunpowder. The miners brought goats to the island for food, and stowaway rats jumped ship to make the island their home. The invasive species gnawed away at the island’s ecosystems for decades until the island was mostly a “barren rock,” said Shanna Challenger, Offshore Islands Conservation program coordinator for the Environmental Awareness Group, a local organization involved in the eradication.

According to Sophia Steele—a program manager with Fauna and Flora International, which was also involved with the removal of the invasive species—the island is an important seabird nesting site for the region. It’s also home to a few lizard species endemic to the island, such as the Redonda ground dragon.

Back in 2012, members of the team responsible for removing the rats and goats traveled to Redonda to collect baseline information about the island. According to Ruleo Camacho, a marine ecologist, the researchers estimated that there were around 6,000 rats and 50 goats on the island’s then-rocky terrain. After the team formed partnerships and raised funds, the removal effort began in earnest in 2016. The researchers attempted to trap goats in corrals and airlift them to the nation’s two large islands via helicopter. That worked for a few of the animals, but the rest of the goats were captured by hand prior to airlifting. To handle the rats, the team scattered bait containing a rodenticide—which did not affect any of the other species on the island—and monitored the island to make sure all the rats were eradicated.

“The monitoring phase is pretty intensive, and you have to be really sure, because if you don’t kill all the rats, really and truly your project has failed,” Steele told Ars.

In 2018, the island was deemed free of rats, and it had already begun to recover as of 2017. Challenger recalls that, prior to the eradication, the volcanic island got the odd flush of green, but afterward, plants began to recover. The team performed a plant survey and identified 88 species of plants that had returned to the island.

“That first blush was kind of shocking,” Challenger said.

Moreover, there was a stark increase in bird species, including the bananaquit and green-throated-carib, a small hummingbird. The number of lizards also increased; the population of the island’s endemic tree lizard tripled post-eradication, and the ground dragon’s population has also effectively recovered. Steele said the difference was striking.

“I think it changed far more rapidly than we anticipated,” Steele told Ars.

The team has not studied the eradication’s impacts on marine life just yet—they are hoping to do so sometime next year. Redonda also doesn’t have the largest reef system, though there are some seagrass fields around it, Camacho said. Similarly, Challenger said that it’s too early to see how the change will impact seabirds. But “the work is pretty encouraging,” Challenger said.

Doug Johnson (@DougcJohnson) is a Canadian freelance reporter. His works have appeared in National Geographic, Undark, and Hakai Magazine, among others.

To read the full story –  Want to save an island’s coral reefs? Get rid of invasive rats | Ars Technica