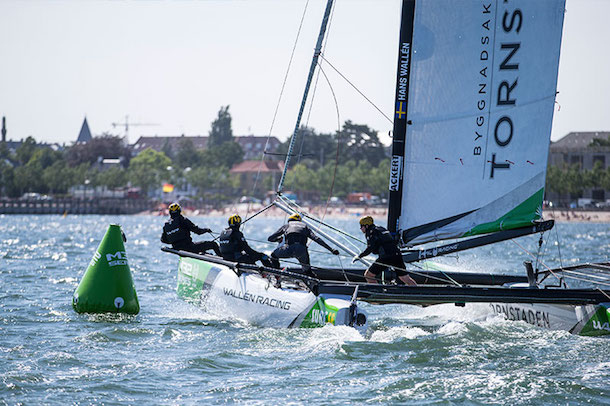 Today the wind really picked up in Tuborg Havn and Race Director Mattias Dahlstrom ordered the teams to one reef in the mainsail and emphasised the importance of keeping the helmets on at all times. The wind was consistent at 18-20 knots and that made it very physical for the crews, but spectacular for the crowd.

Seven races were completed and Wallen Racing came out on top only one point ahead of Essiq Racing and Rahm Racing. “We were very focused and pumped up and the mind-set was in the right place today. We managed to get some good starts and with three second places and one win we are quite happy with our performance”, says a happy Hans Wallen, skipper of Wallen Racing after securing the traditional bucket of beer. The natural choice of beer being in Tuborg Havn is obviously Tuborg.

Rahm Racing was revelling in the blustering conditions, improving the performance of the team with two wins today. They are in contention of the lead of the event and climbed to a fourth place only seven points from the lead. “We are back in the game and it feels good. We had some really good starts and managed to stay out of too much trouble”, says Mattias Rahm.

Essiq Racing continued to be consistent and racking up two wins. “It´s nice to be on the top of the leaderboard in Copenhagen, but we need to improve our starts. On the other hand we make very few mistakes and that is of course to our advantage”, comments Nicklas Dackhammar during the press conference in the Race Village at Tuborg Havn.

Team US One were still struggling in the capital of Denmark. After being in total dominance in Oslo and Gothenburg they haven’t really got it together in Copenhagen. The team started the day being in the back of the fleet but mended their performance after a win in the end. Taylor Canfield reflects on the second day “We had a descent day, but ended up in some difficulties. We were a little bit late in some of the starts and that is what it takes to end up in third or forth position instead of first.”