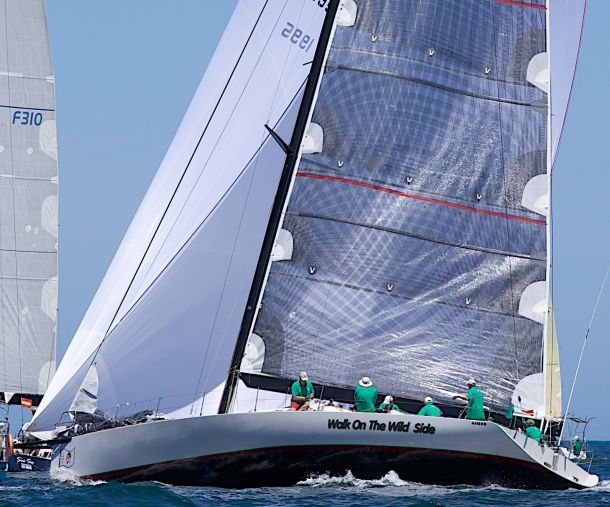 Walk on the Wild Side. Photo Bernie Kaaks.

Second over the line in the 2015 Wonderful Indonesia Fremantle to Bali Race and Rally at 5.52 pm on Monday 25 May was Garth Curran’s Walk on the Wild Side, an Inglis 57, completing the 1440 nautical mile race in 7 days and 7 hours.

The line honours winner Indian, a Carkeek 4, completed the race in 6 days 18 hours with Walk on the Wild Side finishing 13 hours and 52 minutes later.

Garth Curran, Walk on the Wild Side’s owner has previously sailed his yacht in the 2011 and 2013 Fremantle to Bali Races, two Darwin to Ambon races and two Fremantle to Lombok races, however upon arrival in Benoa Harbour yesterday the grin on his face said it all.

Throughout the race the Skipper and crew of Wild Side demonstrated their ability to adapt and persevere when, after blowing out two running sails early in their run north, they worked constantly with their diminished wardrobe, improvising with other sails where required and continuing their chase of Indian for the entire 1440 nautical miles of the race.

The 2015 Walk on the Wild Side crew lineup was skipper Garth Curran, Andy Williams, Tony Bewsher, Martin Anderson, Michael Gunn, Robert Colman, Rodney Keenan, Samuel Threlfall and Max Piesse. “The teamwork was phenomenal. I couldn’t have asked for a better crew”, exclaimed owner Garth Curran. “When there was work to be done, I didn’t have to ask”.

Co-navigator Scott Disley commented that for the first 720 nm the weather models were spot on, but for the second half all the models were 100% wrong. “So we set ourselves the task of sailing the shortest distance to get here. As simple as that.” said Scott.

Over the six days of the race Wild Side was constantly on the trail of Indian choosing to sail a course that kept her closer to the West Australian coast and then sailing a rhumb line course to Bali.

Indian had chosen to take a more westerly course to Bali sailing well west of the WA Coast looking for a favourable north flowing current which, while probably found, meant they sailed 1607nm compared to Walk on the Wild Side’s 1520nm. This extra distance and the continous efforts of the Wild Side crew meant that at the halfway mark Wild Side was leading Indian and the fleet to the great joy of all on board.

This was particularly so for New Zealand Wild Side helmsman Rodney Keenan, who has completed 17 Sydney to Hobart’s, when he explained with a look of great pleasure that finding themselves ahead of Indian at the halfway mark was a moment of enormous satisfaction for all the work the crew had put in.

Walk on the Wild Side co-navigator Tony Brewsher pronounced the highlight of the trip for him was realising this morning when the breeze filled in and Wild Side gathered way after a frustrating period of no wind and strong tides that they were finally going to make it to Bali and complete this great ocean racing challenge.

Race control anticipates retired race boat Audeamus will arrive in Bali on Wednesday 27th of May.

To track the rest of fleet on their progress to Bali follow the race via the Yellow Brick Trackers here: http://yb.tl/f2b2015

The Wonderful Indonesia Fremantle to Bali is a 1440 nautical mile ocean race which starts in the historic Port of Fremantle and finishes in exotic Bali. Presented by Fremantle Sailing Club with its naming sponsor the Ministry of Tourism of the Republic of Indonesia the spectacular biennial event is one of Australia’s most exciting blue water yacht races.

Further information and all event details of the 1440 nautical mile blue water race and rally are on the event website www.fremantlebali.com.au