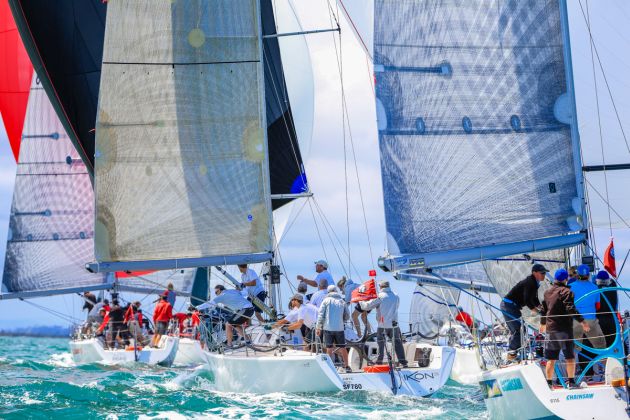 The penultimate day of competition for the two fleets contesting their Australian championships, being held in conjunction with the Festival of Sails presented by Rex Gorell Land Rover, was all about the top boats maintaining focus and consistency.

Rob Deussen and The Beast’s early regatta lead is gradually being whittled away by Brett Whitbread’s Sticky Fingers and Andrew York’s Speedwagon.

Whitbread and crew Joel McDonald lived the dream today to finish with a third, a second and then a first to place equal second overall. “In the first race there would have been only a second or two between the first three boats,” Whitbread. “Then in the second race The Beast took us past the finish boat. In the final race we were a lot quicker downwind; we are lighter than them by about 30 kilos.”

Joining Whitbread in second place is Andrew York. Their fourth place in the final race on the inner Corio Bay track due to a late tactical decision hurt them. They went out right on the run, thinking they were following the pressure and “The other guys went left,” York said.

Tomorrow’s final three races can still upset the top spot. “There is a bit of ground to make up. We are only four points behind The Beast and anything can happen. If we get light air, we have a good chance,” York added.

Defending national champions, Brenton and Jen Carnell’s Phoenix, are Boat of the Day and at the top of the Sydney 38 leaderboard with three races remaining. The Geelong crew finished with a first and two seconds on the outer course area to place them first overall with a one point split to Kirwan Robb’s Ikon.

Consistency is the key word for the Carnells. Across the changing pressure which went from 10 up to 15 knots and as the mostly sou’east breeze clocked left, they sailed smart.  “Today we kept our eyes in our boat and didn’t worry about anyone else,” Brenton Carnell said.

The breeze stabilised in the last race and with that the fleet condensed. “We had to get our way back up the fleet. When the breeze is up a bit the other boats come back into play. There was really close racing today with plenty of passing. Awesome racing,” a chuffed Carnell said.

Greg Clinnick’s Audacious recovered from sixth place in the first race of the day after making a 720 penalty turn at the top mark to avoid a possible protest between White Knight and themselves.

Unperturbed and under the guidance of their Danish tactician Ken Christensen, Audacious went on to take out first place in the closing race of the day. “I think it was the biggest finish margin of the regatta. In that last race we led at every mark and finished clear ahead,” the Australian class President said.

Tomorrow’s final championship day starts at 1230hrs for the VX Ones and at 1300hrs for the Sydney 38s.