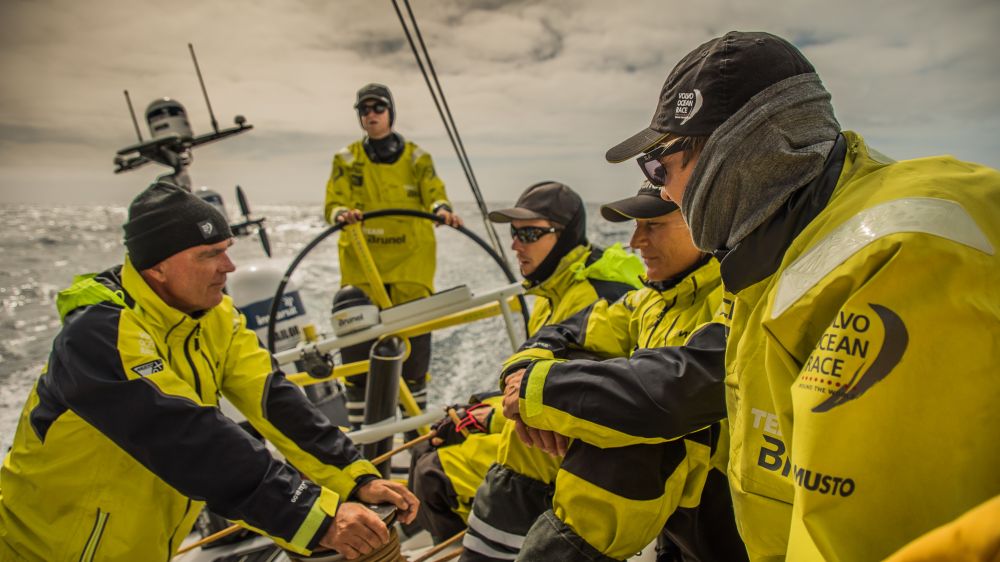 Dutch crew Team Brunel opted to go into stealth mode on Monday, cloaking their position from their rivals for up to 24 hours – as Spanish team MAPFRE led the Volvo Ocean Race fleet towards Cape Town.

Brunel skipper Bouwe Bekking and navigator Andrew Cape made the call to 'disappear' from the rankings following the 0700 UTC report in an attempt to advance on MAPFRE, some 35 miles ahead.

Before going into stealth mode Brunel were in second place, and the most southerly boat in the fleet, but they may be looking to go further south still.

The move comes after a few strong days for Bekking's crew that have seen them profit from being the furthest boat west coming down the Brazilian coastline.

A slightly better angle on the breeze saw them rocket through the rankings from last place to second as the fleet plunge below the latitude of Cape Town.

The timing of Brunel's decision comes as the frontrunners prepare to be scooped up by an easterly-moving cold front bringing northerly winds of up to 30 knots.

It should take the fleet to within a few hundred miles of Cape Town – and provide ideal conditions for fast sailing.

Whether Brunel will have profited from their tactical gamble will become clear when they reappear on the tracker at 0700 UTC on Tuesday.

“If you're trying to pull a big move, for example like now where we're keen to to push to the south, then stealth mode allows you can hide your position from the rest of the fleet,” Brunel boat captain Abby Ehler revealed.

“The routing suggests the north is the way to go but Capey is pretty keen to go south – he feels the southerly route offers less risks. Going into stealth keeps the rest of the fleet guessing. We're just hoping no-one else comes with us.”

As the teams get close to the latitude of the Roaring Forties they are getting their first taste of the Southern Ocean – freezing water, mountainous waves and strong, icy breeze.

“In the last 24 hours we've gone from shorts and t-shirts to boots, warm socks, thermals and dry suits,” said MAPFRE's Sophie Ciszek. “There's definitely a chill in the air. It's going to get windy over the next 24 to 36 hours, and being wet makes it worse.”

One hundred miles to the north, Turn the Tide on Plastic were also feeling the cold as their mid-ocean match race with Team Sun Hung Kai/Scallywag continued.

Both teams kept warm by completing 13 gybes in 24 hours as they tussled for position.

“It feels like we've had our first glimpse of Southern Ocean action,” Turn the Tide on Plastic's boat captain Liz Wardley said.

“It was pretty cold last night and we had breeze up to 30 knots downwind. We're still having our dual with Scallywag. We're sailing in lighter pressure at the moment and trying to make the most of the remaining breeze before we gybe south.”