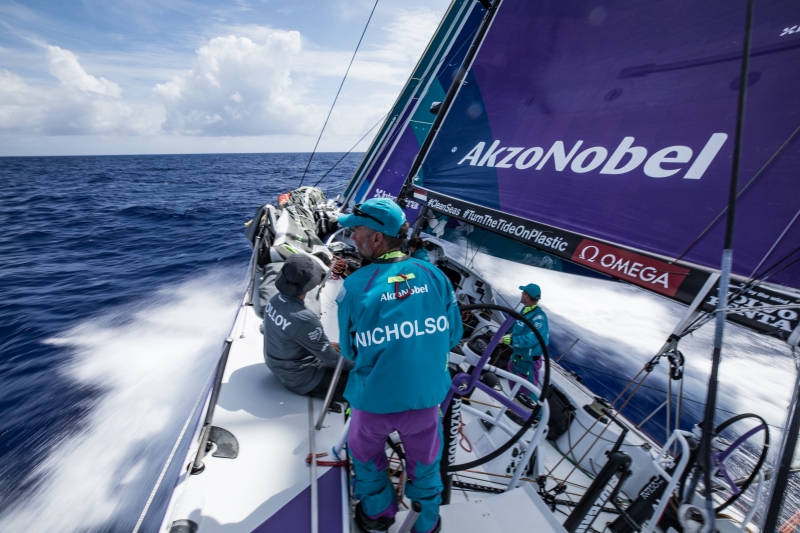 At the 1300 UTC ranking Simeon Tienpont's AkzoNobel was in the Leg 2 top spot because their trajectory, around 70 nautical miles to the east of the fleet, puts them closer to Cape Town than any of their rivals. But while they are technically in pole position in terms of distance to finish, the move is a tactical roll of the dice from Tienpont and his navigator Jules Salter.

By positioning themselves to the east they have reduced the amount of miles they need to sail, but the compromise will likely be lighter winds. By comparison, those teams closer to the Brazilian coast – Dongfeng Race Team, MAPFRE, Team Brunel as well as the most westerly boat, Vestas 11th Hour Racing – are likely to pick up the stronger winds brewing 500 miles to the south earlier, potentially catapulting them towards their goal.

Tienpont said AkzoNobel were hoping to make gains over the coming days from a swing in wind direction that will allow them to point their bows closer to Cape Town.

“There's a bit of a lift coming in the next few days so everyone will come up,” he said. “We've been a bit more on the inside and we've made a few miles back. It's given us a more competitive position on the front guys. We're trying to keep on the inside of them and shoot a bit further forward when we can.”

Meanwhile Vestas 11th Hour Racing team director Mark Towill said that by being more to the west they hoped to delay an inevitable gybe out of a high pressure system and benefit from better breeze.

Although the position report doesn't show it, Dongfeng likely remain the true leg leaders with MAPFRE nipping at their heels in second.

Onboard MAPFRE there's been no let-up as they do all they can to hold on to Dongfeng's coat tails while warding off the attack from Brunel and Vestas.

“When you have boats close by, you have to keep more active because if you relax a little bit the boats behind will catch you and the boats in front will gain in distance,” said MAPFRE bowman and boat captain Antonio 'Neti' Cuervas-Mons. “It's very important you keep focused. That's why we have the position report every six hours – it keeps us working hard. We don't want to lose anything.”

Splitting the difference between west and east, Turn the Tide on Plastic and Team Sun Hung Kai/Scallywag were continuing their battle after the latter reduced the distance to their rivals to just two miles.

“We've had clouds from hell, and out of the cloud came Scallywag,” Turn the Tide skipper Dee Caffari reported. “They're two miles behind now. Not what we wanted. It's like having a whole other Doldrums.”