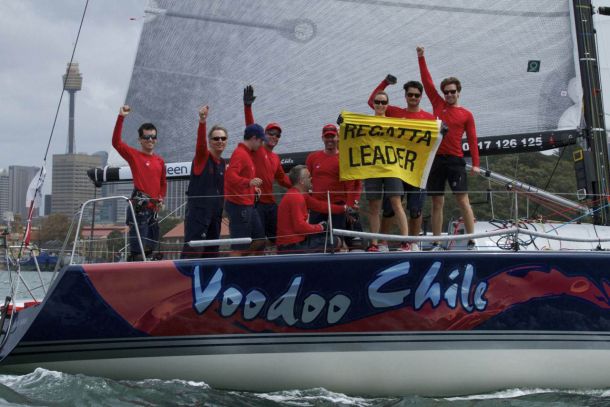 Lloyd Clark and Andrew Hunn’s Farr 40 Voodoo Chile sailing for Tasmania beat the host state’s majority line-up to be declared NSW champion at the penultimate contest of the one design class’ 2014/15 season.

“We haven’t won a NSW title before and we are pretty chuffed to take it off a majority NSW fleet,” said Hunn. Even with a six point margin to Guido Belgiorno-Nettis’ Transfusion in second, Hunn says the tidy Sydney crew is still the benchmark. “Our crew work wasn’t quite as slick as theirs and we expect them to come back pretty hard in the nationals. The outcome today is not a definitive result.”

The dueling Farr 40s have shadowed each other at every encounter and they both want the main prize, and deserve it. Transfusion’s capped team has secured five national titles since 2009. Voodoo has been on the verge of greatness for the past couple of years and is spring-loaded to keep the silverware out of Belgiorno-Nettis’ hands this time around.

Boat of the day and third overall in the two day eight race NSW series went to Jeff Carter’s Edake. “We are very pleased with our results going into the nationals. To finish boat of the day ahead of Voodoo and Transfusion is really something; it’s the first time ever,” said the thrilled Middle Harbour Yacht Club skipper.

He reckons getting off the line cleanly and hooking into the first left hand shift was the differential in the average nine knot E-ENE breeze on Sydney Harbour.  Maintaining impetus downhill and keeping your lane counted for plenty too. “If you lost concentration on the downhill in particular, you’d quickly give up your spot. It was super close racing, typical of the Farr 40s.”

Carter gave a pat on the back to the Corinthian crew of Carl Russett’s Windy Too for travelling from Pittwater to sail against a crackerjack fleet. “They get the best improved, in the final race they were much closer to the front runners than yesterday.”

“We didn’t hurt anyone,” acknowledged Russett. “Yesterday was a shocker though we’ve had a great time. The other guys have been so accommodating and helpful; some of Transfusion’s crew changed one of the blocks on our spinnaker pole track after finding a spare somewhere. The camaraderie and kindness has been fantastic, it really has been an experience.

“I would encourage all the guys at the top level to have a go; it’s been a hoot and a completely different style of sailing for us. Our youngest crew is 47 and we have some in their 70s; everyone else enjoyed a nice break between races while they waited for us to finish,” Russett joked from the Royal Sydney Yacht Squadron soon after the presentation of regatta trophies.

Farr 40 crews have three days to make any changes then on Thursday March 26 they return to the RSYS for the John Calvert-Jones Trophy national title, a three day all-out on water engagement for the right to be added to the Australian Farr 40 champion honour roll.