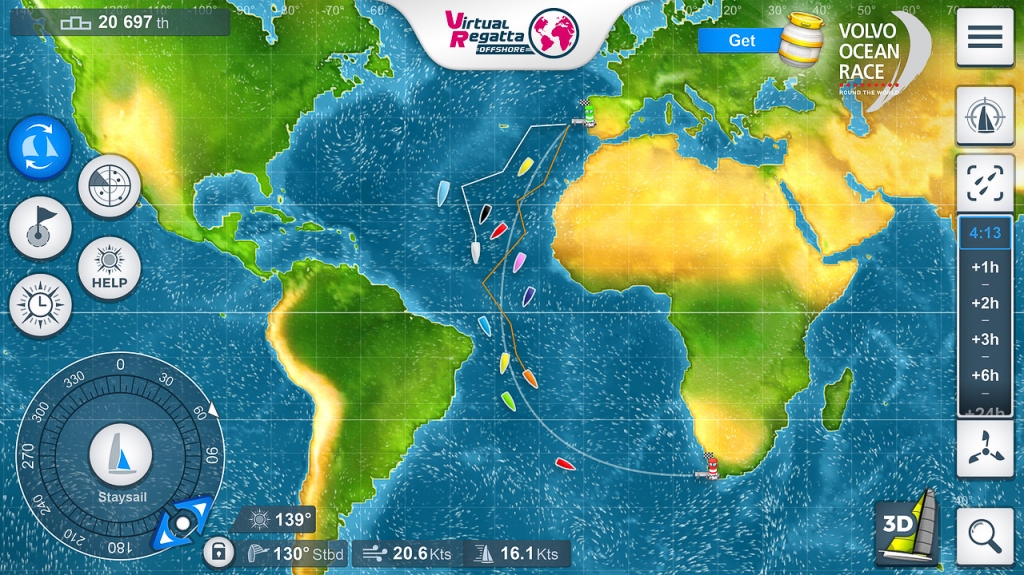 The new edition of the game, to be launched to coincide with the Prologue leg of the race on October 8, now features offshore and inshore racing, just like the real thing.

The Volvo Ocean Race is sailing’s toughest challenge – a 45,000 nautical mile test of skill and character as crews race around the world on 65-foot race yachts, designed to go up to 500 nautical miles per day, with top speeds of over 30-knots.

At 11 of the stopover ports, the crews switch gears for the in-port races, short sprints around coastal race courses. And for the first time, players of the official game have the opportunity to test their skill with an inshore version of the game as well.

The last edition of the Volvo Ocean Race Game, for 2014-15 saw over 200,000 skippers test their skills, charting a virtual course against the real-world fleet as it raced around the world.

Now, Volvo Ocean Race is again teaming up with Virtual Regatta, a world leader with over 1 million players annually, to deliver the most realistic way of challenging the best in the world.

As a player, your boat sails 24 hours a day/seven days a week for each leg, just like in the Volvo Ocean Race. It is up to you to choose the best sail configuration and course to get to the finish line first, taking into account the real-life weather conditions.

The game will available on all online platforms, including iOS and android apps.

The first test leg for the teams and for virtual racers is the Prologue from Lisbon to the home port of the Volvo Ocean Race in Alicante, Spain. Starting at 1350 local time (UTC+1), on Sunday, 8 October, the leg is expected to take up to four days – a short, sharp, taster, ahead of Leg One on October 22.

Volvo Ocean Race and Virtual Regatta have agreed all revenues generated from the prologue leg will be donated to the Clean Seas campaign, a part of the United Nations Environment Programme.