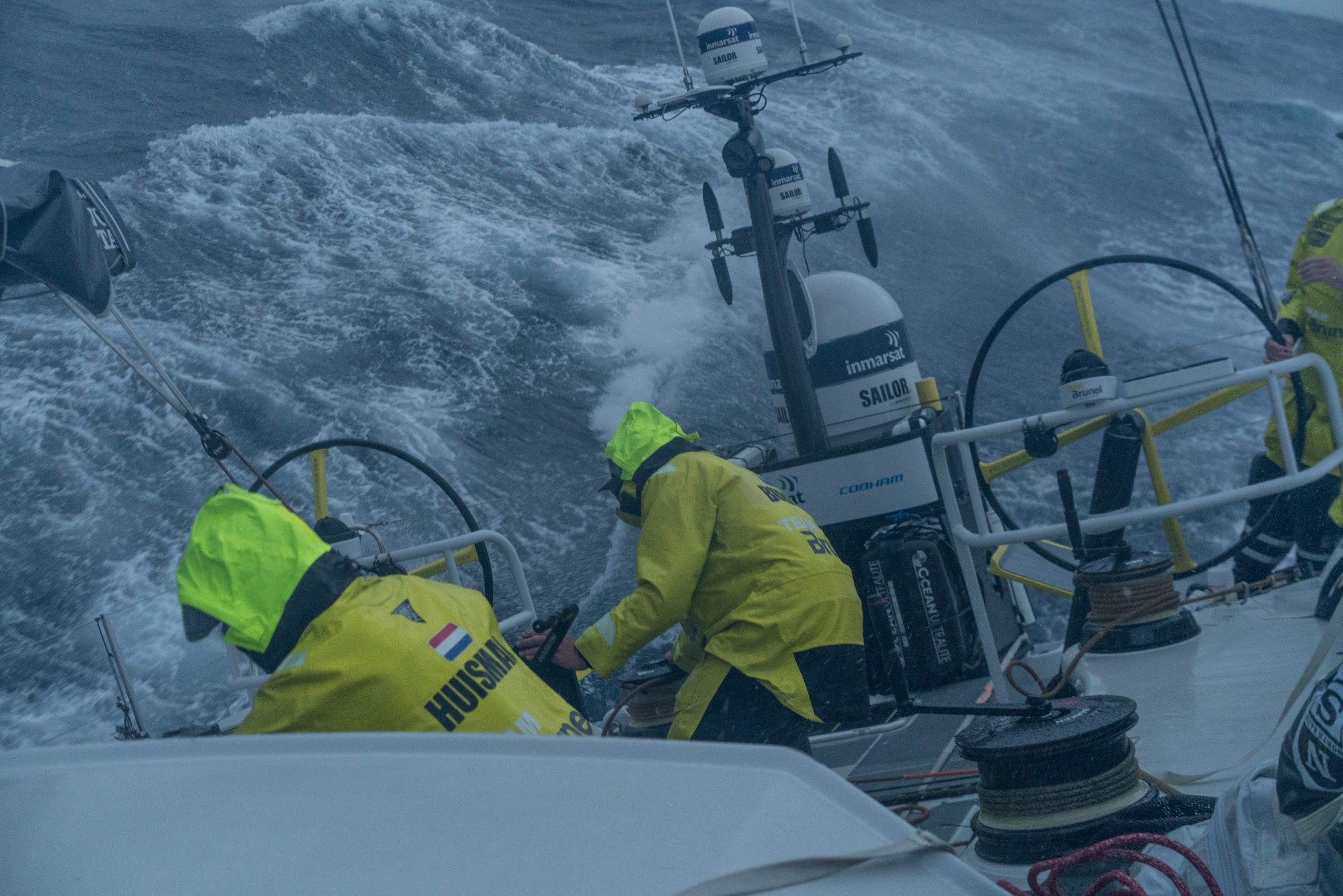 Early numbers from Race Control suggest that the northern gamble isn’t paying off for team AkzoNobel and Sun Hung Kai/Scallywag on Day 3 of Leg 6 of the Volvo Ocean Race from Hong Kong to Auckland.

The two boats tacked immediately after passing the southern tip of Taiwan to split the fleet, and at the 1300 UTC position report, they find themselves over 125 nautical miles behind leaders Team Brunel, who are sailing in the southern pack.

It’s early days for the two boats, which are gambling on better conditions in the north in the coming days, but right now they’re racing in 3-5 knots, compared to 15 knots further south.

“We tacked off too early in hindsight,” admitted team AkzoNobel navigator Jules Salter. “We’re really disappointed. We made the decision quite quickly to tack, it looked like everything lined up, Scallywag went and the first sched was ok, the second sched not so much. The first four have now gone, and now it’s just us two left racing.”

On board Scallywag, spirits are still high – and navigator Libby Greenhalgh says the Hong Kong boat is playing the long game.

“Long term, we’re trying to hook into the northerly breeze. In theory, we’ll be into that first and be in a position to come bow down on top of the fleet.”

Meanwhile, the southern group, consisting of Brunel, MAPFRE, Dongfeng Race Team and Turn the Tide on Plastic, is still within sight of each other, and fighting hard for every last inch in brutal upwind conditions.

“It’s super close, and very tough,” said MAPFRE’s Sophie Ciszek. “We have Dongfeng on our bow, and I just spotted Turn the Tide too. The racing has been full on and the conditions haven’t been nice – it’s been upwind, unpleasant and wet, and we’ve had quite a few J1 to J2 peels which are pretty much the most unpleasant peels we can do in terms of water on deck, so we have a few people not feeling very well.”

She continued: “We’re happy to be in this group of boats, the other two (AkzoNobel and Scallywag) are a lot further to the north and they’ve had less pressure. They’re losing right now but they’ll make gains further along, and we’re all going to converge at some stage up ahead.

“We’re going for the safer option – the vibe on board is to stay with the other guys and there’s tension to keep racing hard and keep up our speed. Not much sleep going on, we don’t want to let them out of our sight.”

Dongfeng skipper Charles Caudrelier admitted that the Chinese boat almost joined the two northern boats, but decided that the gamble was too much too early in the leg.

“To be honest, when AkzoNobel and Scallywag tacked, we were thinking of doing it too – but we thought it was too big of a risk. It looks like they’re in a light spot now.”

He added: “It’s the most complicated leg in terms of weather. You don’t just need a good brain; you need a bit of luck on this one too. There is so much transition ahead, I don’t know what the key moment will be, so we’re taking every hour and trying to optimise it with small gains.”