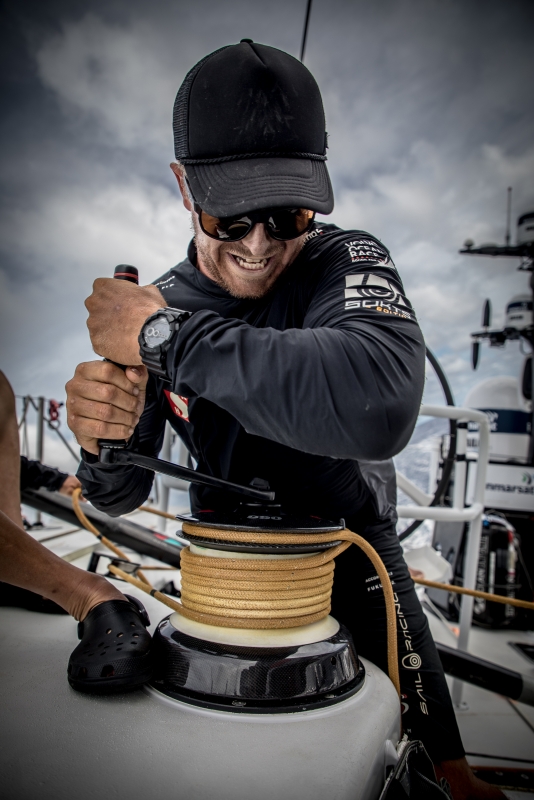 Following one of the longest and most painful doldrums crossings in memory, the Volvo Ocean Race fleet is now in the north-east trade winds and speeding towards the finish line in Hong Kong, some 2,700 nautical miles to the north-west.

The fleet finds itself in three distinct groupings, with Dongfeng Race Team leading team AkzoNobel and Vestas 11th Hour Racing in the northernmost triumvirate. And it’s in the north where the stronger winds should be as the north-easterly trade winds get established.

“I think we are in a strong position,” said Dongfeng Race Team skipper Charles Caudrelier. “We have just left the doldrums and we should be the first ones to catch the trade winds… we hope.

“We are very close on the ranking with Scallywag, but we prefer our position for the future.”

While that northern option may turn out to be the correct one, at the moment, it’s David Witt’s Sun Hung Kai/Scallywag which is stealing a march on the opposition.

Contrary to many weather routing predictions, Witt and his crew have managed to craftily cut the corner, turning west before the rest of the fleet and gaining valuable miles towards the finish.

“The weather has helped us for sure,” Witt said. “It’s a balance between making decisions based on what the weather files tell you and what you can see in front of you…

“Anything can happen, it’s a pretty volatile situation still, but I’m pretty sure this group of people can deal with whatever happens.”

The Scallywags make up the middle grouping on their own, with MAPFRE leading Turn the Tide on Plastic and Team Brunel in the final triad, some 150 nautical miles directly east and further from the finish line compared to Scallywag.

For the trailing group, it’s been 24 hours of immense frustration. One final cloud in the doldrums grabbed these three and wouldn’t let go, while the other four were speeding away.

“We thought we’d be fighting at the front and now we’re fighting at the back which is not where we wanted to be,” said Dee Caffari, the skipper of Turn the Tide on Plastic. “Really disappointed, but we have nearly 3000 miles left to make it up.”