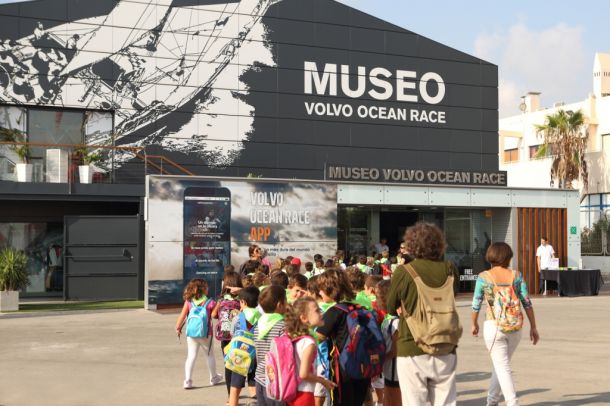 ALICANTE, Spain, June 19 – The Volvo Ocean Race Museum in Alicante registered 61,310 visits in its third year – an increase of more than 75% on the previous 12 months. With 39% of those visits coming from international visitors, this unique museum has become the most international in the region of Valencia.

The largest proportion of international visitors came from the United Kingdom (25%), followed by the Netherlands (11%), France (10%) and Sweden (8%). According to the latest statistics by the Spanish Ministry of Culture and Sports, the average rate of foreign visitors in museums in Spain is 14.2% and in the Valencian region, 13.7%.

The Volvo Ocean Race Museum opened its doors for the first time on June 19, 2012, and is based in the Race’s state-of-the-art headquarters in the thriving port area of Alicante, one of Europe’s most popular tourist destinations.

Through interactive displays and installations, the museum offers a fantastic insight into the 41-year history of the round-the-world yacht race.

Highlights of the year have included two major photo exhibitions and the installation of Brasil 1, one of the competing boats in 2005-06, as a permanent hands-on exhibit giving the public the chance to experience on-board conditions. Brasil 1 is exhibited outside the Museum next to The Black Pearl, another Volvo Open 70 racing boat from the 2005-06 edition, that helped promote Disney’s film series “Pirates of the Caribbean”.

One of the photo exhibitions, ‘40 Years, 40 Faces’, has been displayed in cities around the world.

The current exhibition, ‘24 Hours Onboard’, is a collection of spectacular pictures taken by the current edition of Onboard Reporters and detailing the extreme conditions sailors face during a normal day in one of the toughest sporting competitions in the world.

Visitors can complete their multimedia experience at the Museum with on the Volvo Ocean Race simulator.

“It’s been an outstanding year for the Museum,” said Knut Frostad, CEO of the Volvo Ocean Race. “It’s become very popular in Alicante, the number of foreign visitors has increased and the Museum has brought exhibits to different countries.”

The busiest period for the Museum was from October 2-11, 2014, when 12,338 people experienced the Museum during the Race Village that celebrated the start of the 2014-15 edition of the Volvo Ocean Race.