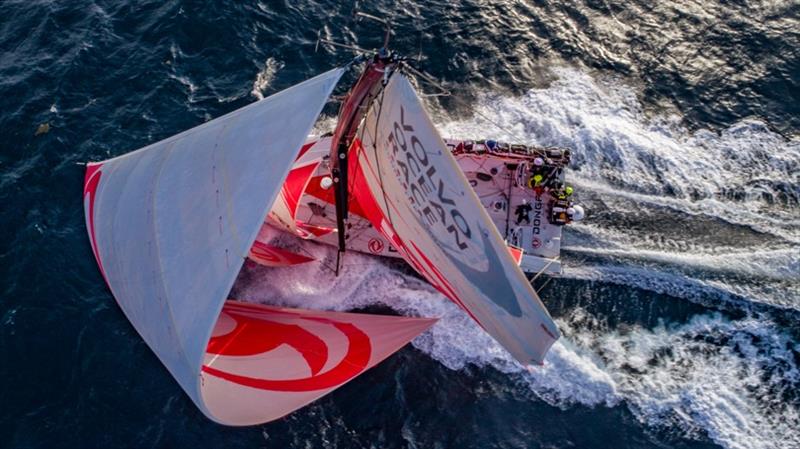 Twelve days into the 5,600-mile sprint from Itajaí in Brazil, the quick sailing through the trade winds was continuing Friday – although lighter winds lay in wait further down the track, meaning Brunel's lead of seven miles is far from secure.

Bekking said his crew were making the most of the ideal conditions while they last: “We are pushing to the max we can do,” the veteran Volvo Ocean Race sailor said. “We know we are sailing into less pressure so the boats behind us will keep gaining, annoying but a fact we have to live with.

“Capey (Andrew Cape), our navigator, is relaxed in his own way, but can see and feel that it is game on. He makes I don't know how many simulations for all the routes possible from here to Newport and we are discussing this together with Pete (Burling) as well.

“Two very important factors are the high pressure system east of Bermuda and the Gulf Stream which runs from Florida into a north east direction towards Europe.

“The current can run up to five to six knots. Unfortunately it is not one straight stream, it has big eddies, so if you do it wrong you can have five knots against you while another boat has five knots with them. But we are confident!”

Around 25 miles south east of Brunel, Dee Caffari's Turn the Tide on Plastic slipped out of the podium spots after hitting a patch of lighter wind.

As the seven teams drew level with Puerto Rico, Vestas 11th Hour Racing were able to skirt round the outside of them into third.

“Three disappointing position reports in a row is frustrating and could get you down,” Caffari said. “However, we will fight harder, we just need to let these rain clouds know…

“During the early hours of this morning the rain clouds carried some squally action and huge shifts. One minute we were in 28 knots of wind heading towards the Caribbean and then the next moment we were lifted, towards the centre of the high pressure, in 14 knots of wind.

“We can only sail in the conditions that we have and we are working hard but it seems everyone else's clouds are more user friendly allowing them to keep gaining on us and we are slipping back.

“If it is not the up and down and shifts of the wind then it is this Sargassum weed. Rudders no longer having smooth water flow lose grip and the boat spinning out is not fast.

“We have two more days of this express highway and then the breeze will start to decrease before we gybe and sail on port. We then face a lot of action and sail changes between us and the finish from that gybe point.”

Out to the east of the leaders, MAPFRE and team AkzoNobel are in a dead heat for fifth place, about 45 miles off the lead.

Meanwhile, seventh-placed Team Sun Hung Kai/Scallywag clawed back miles on the leaders as they posted the best 24-hour distance run of the fleet, notching up 513 miles.

“We still believe it's going to be close at the finish,” he said. “There's going to be a transition close to the finish and our routing has us coming in a few hours behind the leaders.”