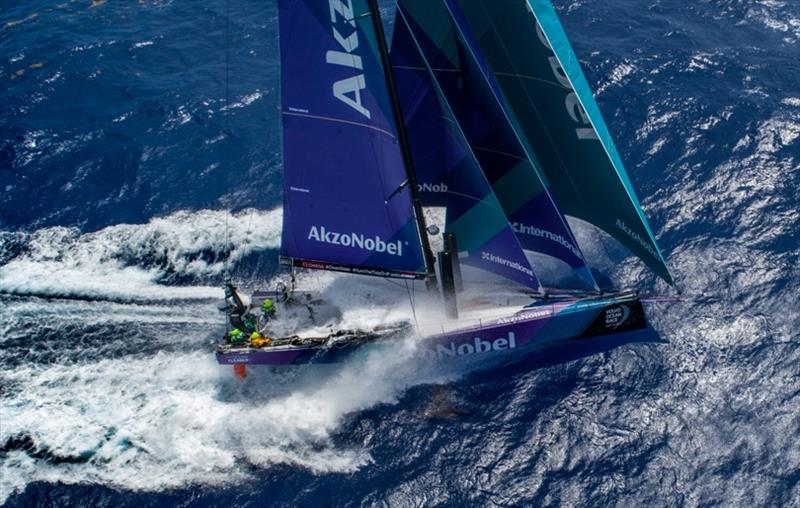 On Friday at noon UTC, Brunel had a 12-mile lead over Dongfeng. 24 hours later the advantage is less than three miles, with the red boat in sight and sailing directly behind Bouwe Bekking, making up distance slowly but surely.

With the leaders now having less than 1,000 miles to sail to the finish line in Newport, Rhode Island, the gains couldn't come at a better time for Caudrelier's Chinese-flagged Dongfeng.

“We would prefer to be ahead… but it's not too bad. We've come back very close now. It's nothing. We're happy about the position, it could be much worse,” Caudrelier said.

“For the moment we are faster but we think they are getting slightly less wind ahead. There is plenty to do coming up. A decision on a gybe, the peeling (sail manoeuvrers, so it will not be only about speed. I also think Vestas might come out very close to us.”

As Caudrelier says, the two leaders aren't having it all their own way. Nearly 30 miles directly to the east, Vestas 11th Hour Racing is making a move as well. The team has leverage for the upcoming wind shift and gybe and is hoping to sneak around the front of the two leading boats to lead into skipper Charlie Enright's home port of Newport, Rhode Island.

“Right now we're trying to weigh up being the first boat to the shift, bow forward versus trying to stay in more wind by getting to the west. Our main competition is further west, so they'll be in better pressure but we might get the shift first. So we have to do some good work to get in that position to gybe and come out ahead.

“After that there will be another front to negotiate and a high pressure coming off New England so it's all happening the last couple of days. It's going to be full of action.”

Overall, there has been compression in the fleet, with each of the trailing boats making up miles over the past 24 hours.

Turn the Tide on Plastic remains in fourth place, 27 miles back of the leader, while team AkzoNobel and MAPFRE continue their private match race a further 20 miles back.

Team SHK/Scallywag has been the biggest gainer over the past 24 hours, but remains 165-miles in arrears.