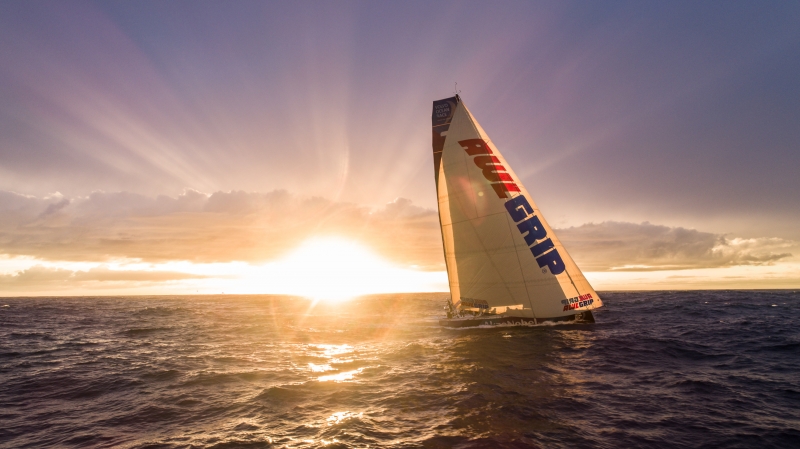 The battle for victory in Leg 7 of the Volvo Ocean Race took a new twist on Friday as Dongfeng Race Team moved to within striking distance of long-term stage leaders Team Brunel.

Bouwe Bekking’s Brunel crew have seen their lead of 80 miles in the Southern Ocean and more than 30 miles at Cape Horn slashed to just 2.8 miles at 1300 UTC as Dongfeng pile on the pressure in the Atlantic.

The teams might have been hoping the weather gods would go easier on them in the South Atlantic following one of the most testing Southern Ocean passages the race has seen in recent history, but their wishes have yet to be granted.

As the Volvo Ocean 65s punched north-east at speeds of up to 20 knots, the already exhausted sailors were being tested even further towards their physical and mental limits.

Compounding the challenge is the closeness of the racing. An easterly-moving front swept across the back of the fleet first, allowing them to turn towards the north (and the finish in Itajaí, Brazil) much sooner than leaders Brunel.

Having sailed more than 6,400 gruelling miles, around half of those at the front of the fleet, Brunel is now locked in yet another fight for the top spot that could go down to the wire.

“It’s painful for us because the boats behind us got the shift first,” Bekking said. “We’re going to come all back together again, but that’s yacht racing… It looks like the finish of this leg will all come down to the last 200 miles, which we’ve seen so many times. It will be game on.”

Behind the top three, two teams are racing at less than full capacity. MAPFRE is back on track after suspending racing for 13 hours at Cape Horn to make repairs. Despite being 200 miles off the lead, the Spanish team now has the inside lane.

And Turn the Tide on Plastic is pushing forward with a reduced sail plan, after finding that a starboard side spreader root, a component used to attach the spreader to the mast, had moved. At one point, the team was assessing whether it would need to stop. But after consulting with the mast supplier, who modelled various scenarios, the current plan is to keep racing.

Skipper Dee Caffari said, “We are back in the game with double points on the scoreboard. Keep your fingers crossed.”

No one was hurt when the rig came down and the team was able to clear away the damage and proceed under its own power to the Falklands.

“I was driving at the time,” said navigator Simon Fisher. “There was a big bang and the rig broke just above the first spreader… The top of the mast landed in the water with the stump sticking up… To protect the integrity of the hull, we had to cut everything away.”

The Vestas 11th Hour Racing team is currently working through several logistical scenarios to re-join the fleet in Itajaí.

“It's a challenge. The whole thing is a challenge,” said crew member Stacey Jackson. “Whether you are racing the weather or the elements or setbacks like this. I think it just tells the story that this race is about overcoming difficulties…”

Team Sun Hung Kai/Scallywag continues to make progress towards a landfall on the west coast of Chile, and is due early next week.