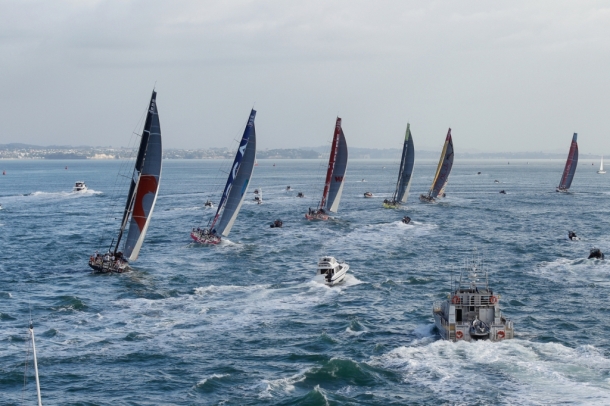 Volvo Ocean Race’s six-strong fleet finally headed out of Auckland on Wednesday morning after the Leg 5 departure was delayed 67 hours to avoid the worst of Cyclone Pam.

However, the crews, led out of the ‘City of Sails’ by Dongfeng Race Team (Charles Caudrelier/FRA), knew they may have avoided the deadly weather system, but still face the toughest of all nine legs as they race through the notorious Southern Ocean.

“The conditions will be light early on, with coastal sailing up to East Cape (the tip of New Zealand), but after a few days it will be the full-on Southern Ocean regime,” said the race’s official meteorologist, Gonzalo Infante, shortly before departure at 0900 NZ time (2100 Tuesday CET).

“From then, the boats will be facing 25-35 knots of wind (46-65 kilometres per hour) for much of the time until they round Cape Horn.”

Cyclone Pam, which forced the postponement from Sunday until Wednesday having wrought havoc in the South Pacific and causing at least 11 deaths on Vanuatu, will no longer be a major factor for the fleet, added Infante.

Leg 5, the Southern Ocean leg, from Auckland to Itajaí in south eastern Brazil, is 6,776 nautical miles (nm) long, will take roughly three weeks to complete, and is one major reason why many of the sailors in the fleet are competing in the Volvo Ocean Race.

The route takes the boats close to Point Nemo, the remotest place from land, in the South Pacific where the nearest humanity can be found in the space stations patrolling the earth.

It will also take the fleet back into the Atlantic for the closing stages of the leg for the first time since November, but, memorably for most, they will pass Cape Horn in the Southern Ocean on the tip of South America.

Ever since the 17th century when it was first regularly navigated by trade shipping, Cape Horn has been an iconic landmark for all sailors although it has claimed many victims over the years.

More people have reached the summit of Everest than sailed around Cape Horn. Waves can reach up to 30 metres (100 feet), roughly the length of a Volvo Ocean 65 mast, and the only company the sailors have will be albatrosses.

Many see the leg as a key staging post in the overall race. Simon Fisher (GBR), navigator for current leaders Abu Dhabi Ocean Racing (Ian Walker/GBR), summed up: “There’s nowhere else on earth where you can do so much fast downwind sailing for so long,” he said.

“It’s going to be the first time the whole fleet sees a lot of wind for an extended period and it might shuffle the pack. Keeping in one piece all the way to the Horn is important, because that’s where the race will be won and lost.”

The same leg caused havoc to the fleet in the last edition in 2011-12 with only winners Puma escaping serious damage and eventual event victors Groupama limping home with a jury rig.

Nevertheless, so many hardened Volvo Ocean Race sailors keep coming back for more with the massively experienced Stu Bannatyne (NZL) and Damian Foxall (IRE) being recruited for this leg by Team Alvimedica (Charlie Enright/USA) and Dongfeng Race Team respectively.

Bannatyne, a six-time race veteran, did not need much persuading, it seems. “This,” he said, “is the best sailing in the world.”

The boats are expected to arrive in Itajaí around April 7.