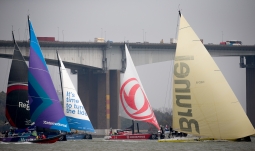 The Volvo Ocean Race fleet slipped lines at the Nansha Marina in Guangzhou, China on Monday morning in preparation for Leg 6 to Auckland, New Zealand, which will start this Wednesday following a short stop in Hong Kong.

For Liu Xue (aka Black) racing on board Dongfeng Race Team in the next leg, it was a homecoming he will not forget: “For me this has been a magical few days with the team arriving in China and visiting Guangzhou where we have enjoyed the support of our friends families and everyone at Dongfeng.”

The Guangzhou stopover marked the fourth time the Volvo Ocean Race has stopped in China over the past 10 years, beginning with the Olympic sailing venue of Qingdao in the 2008-09 edition. Subsequent races have visited Sanya (2011-12 and 2014-15) and now the current race is in the Hong Kong SAR and Guangzhou, China for the first time.

“This my third time that I've been to China with the Volvo Ocean Race. We have been for a few days and it's different than to what we are used to, but very nice,” said Team Brunel skipper Bouwe Bekking.

“There is an excellent marina and the infrastructure is superb. The organisation is fantastic and it's clear that the Chinese know how to put things into place very quickly.”

Six teams in the Volvo Ocean Race fleet are scheduled to cross the starting line off Hong Kong for Leg 6 to Auckland on Wednesday February 7 at 1300 local time (0500 UTC), although strong winds are forecast which may push the start time earlier to get the fleet away ahead of the big breeze. Race Management will confirm the start time within the next 24 hours.

The seventh team, Vestas 11th Hour Racing, has announced it will miss Leg 6, following a collision with a non-racing vessel at the end of Leg 4. The team has already missed the Leg to Guangzhou.

In a statement, the team said: “The time required for repairs means the team will not be rejoining the race in time for Leg 6 from Hong Kong to Auckland, New Zealand. The shore crew has loaded the yacht onto a freight vessel in Hong Kong for transportation to Auckland.

“The team aims to have repairs completed during the stopover in Auckland, in time for inshore racing and the start of Leg 7 to Itajaí, Brazil, which is scheduled for March 18,” the statement concludes.