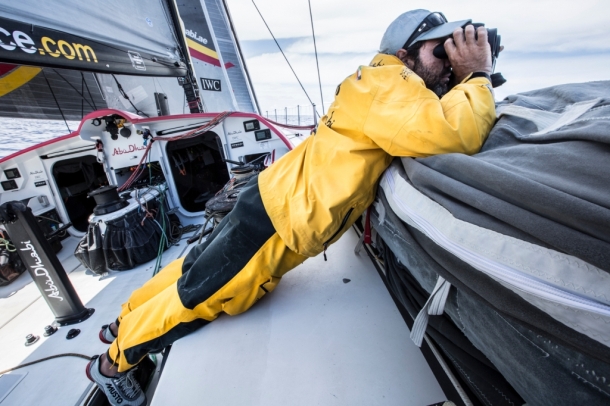 The Volvo Ocean Race’s only North American stopover in Newport, Rhode Island, was set to open with a fanfare on Tuesday, while less than 500 nautical miles (nm) away at sea, six boats were battling desperately to become the first to join the party.

The 2014-15 12th edition is the first in the race’s 41-year history to be contested on one-design boats and it has so far delivered a series of amazingly close leg finishes.

In the previous stage, Leg 5 from Auckland to Itajaí, the first four boats finished within an hour of each other. Leg 6 looks as though it could well end up just as tightly contested all the way to the very last nautical mile, with the first five boats separated by less than 20nm.

Just over 50nm behind the main pack, the women on Team SCA (Sam Davies/GBR) were in the best pressure and making ground fast.

On Tuesday evening, the boats will be making one last, planned gybe out of a light wind area.

After reasonably wide lateral separations earlier in the 5,010nm leg, the crews do not look like that they are taking any more bold gambits in bids to find favourable winds or currents, and are now tightly bunched and closely monitoring each other.

They will be helped by a reasonably forceful south-westerly wind across the Gulf Stream mid-morning (UTC time) on Wednesday before the final push for home where typically variable winds will keep the crews guessing to the very end.

A latest estimated time of arrival from Race Control in Alicante is around 1500 UTC on Thursday, although there is still plenty of room for change on that.

So who will win? At 0940 UTC on Tuesday, Dongfeng Race Team (Charles Caudrelier/FRA) were continuing to guard a 2.1nm lead after sacrificing some of their earlier advantage to return to a position where they could cover the rest of the fleet.

The Emirati boat’s dilemma was well summed up by Onboard Reporter, Matt Knighton: “Ian (Walker) has been in a constant state of tension all-day – cover Team Brunel and stay locked into second place or attack Dongfeng if there’s an opportunity.”

Meanwhile, back in Newport, the atmosphere was already electric in town with a string of VIPs in attendance to officially open the Race Village led by Rhode Island Governor, Gina Raimondo, and Congressman David N. Ciccillini.

For Team Alvimedica, skippered by Rhode Islander Charlie Enright, the pressure to succeed in the race to their home port is almost palpable.

Their onboard reporter, Amory Ross, himself a Newport-based local, wrote on Tuesday: “It has happened so many times in this race, that after thousands and thousands of miles spent crossing this world’s oceans, it is the final hundred or so that decide the outcome.

“As much as we’re already thinking about Newport and how great it will be to get back there, we promise we’re doing our best to prepare for every opportunity we may get between now and then to show how far we’ve come since we last left.”