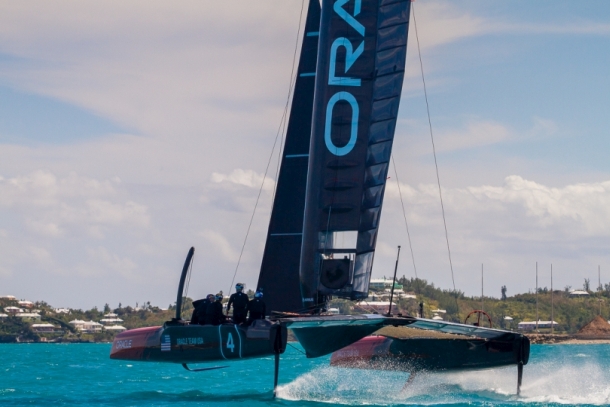 ORACLE TEAM USA became the first America’s Cup team to sail an AC45S boat on the Great Sound in Bermuda.

“Today is the first day for our AC45 out on the Great Sound. We’ve been working towards this moment for nearly six months since Bermuda was announced as the venue,” said Tom Slingsby, the sailing team manager and tactician for the team.

“The goal today is to commission the boat. While this AC45S has sailed before in February, today we need to get out there, check all the systems and make sure everything is working as it should.”

Although Slingsby said the real training and practice would take place later in the week, it didn’t take the team long to start pushing both boat and crew.

“Pretty much from the start we were foil-gybing and we even took a crack at a couple of foiling tacks. It was fantastic. A perfect day in Bermuda with 5 knots of breeze. ” said skipper Jimmy Sptithill, who also navigated the boat at speed through a local race course.

“The International One Design fleet was out having a race and we were absolutely tearing past them and we were getting a few hoots and hollers,” Spithill said. “People are really blown away when they see what this boat can do.”

ORACLE TEAM USA will continue to train on its AC45S as well as the smaller foiling Phantom catamarans and Moths on the Great Sound over the coming weeks.

“It’s a real statement to be the first ones out there on the 45-footer and to get a feel for the race course on a boat of this size,” Spithill said. “It can only help to give us an advantage as we come into the race period.”