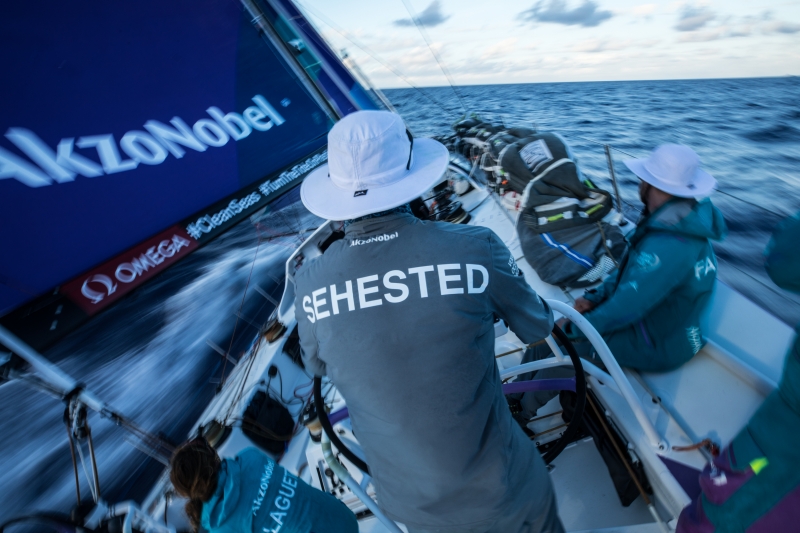 The leaders on Leg 4 are still making good progress, but only have about 200 miles to go until the wind starts to ease significantly on approach to the Solomon Islands.

As at 1300 UTC on Saturday, the wind was still near 15 knots for most of the fleet, now racing north on a long starboard gybe. But by this time Sunday, it is expected to drop to under 10 knots.
That could be good news for the trailing boats, who can expect to make up miles as the leaders hit the lighter patch first.

Simeon Tienpont, the skipper of team AkzoNobel, has been pushing leader Dongfeng Race Team very hard over the past 24 hours, at one point closing to within a mile.

“We're working pretty hard and it's gone from a technical race and turned into a drag race. We’re not favoured because the guys in back are bringing the pressure (wind) down with them so we need to work for every single meter.

“But everyone is pretty ‘tranquil’. We’re satisfied with each other and everyone is putting their heart in and working hard and taking care of each other. It's a long race so we need to keep cool in these warm conditions.”

Dongfeng continues to lead, with team AkzoNobel and MAPFRE in hot pursuit. The east-west split in the fleet is narrowing as well as the teams try to mitigate risk on approach to the doldrums.

Earlier Saturday, Sun Hung Kai/Scallywag doubled back on their track to avoid a reef.

“Boats don’t go too well going across reefs,” skipper David Witt explained. “So we’re gybing to get to the north of it. There’s a bit of difference between the electronic and paper charts so we’re being cautious.

“We're trying to keep as fast as we can towards the Solomons and we're west of everybody so we'll see how that pans out in a couple of days.”

These small, isolated reefs are a feature of the area where the teams are sailing now and will continue to be a hazard as they leave the Solomon Islands to port.

Extra vigilance and caution will be required over the coming days as weather and geography conspire to make life difficult for the navigators.

“Over the course of the next couple of days we will see the transition from steady (in relative terms) trade wind sailing to the more unstable conditions associated with the doldrums,” said Vestas 11th Hour Racing navigator Simon Fisher.

“More convection, lighter winds and a likely compression of the fleet. At this point we could see the race restart and for this we will need to be on our toes as the battle north to the new trade winds will begin.”