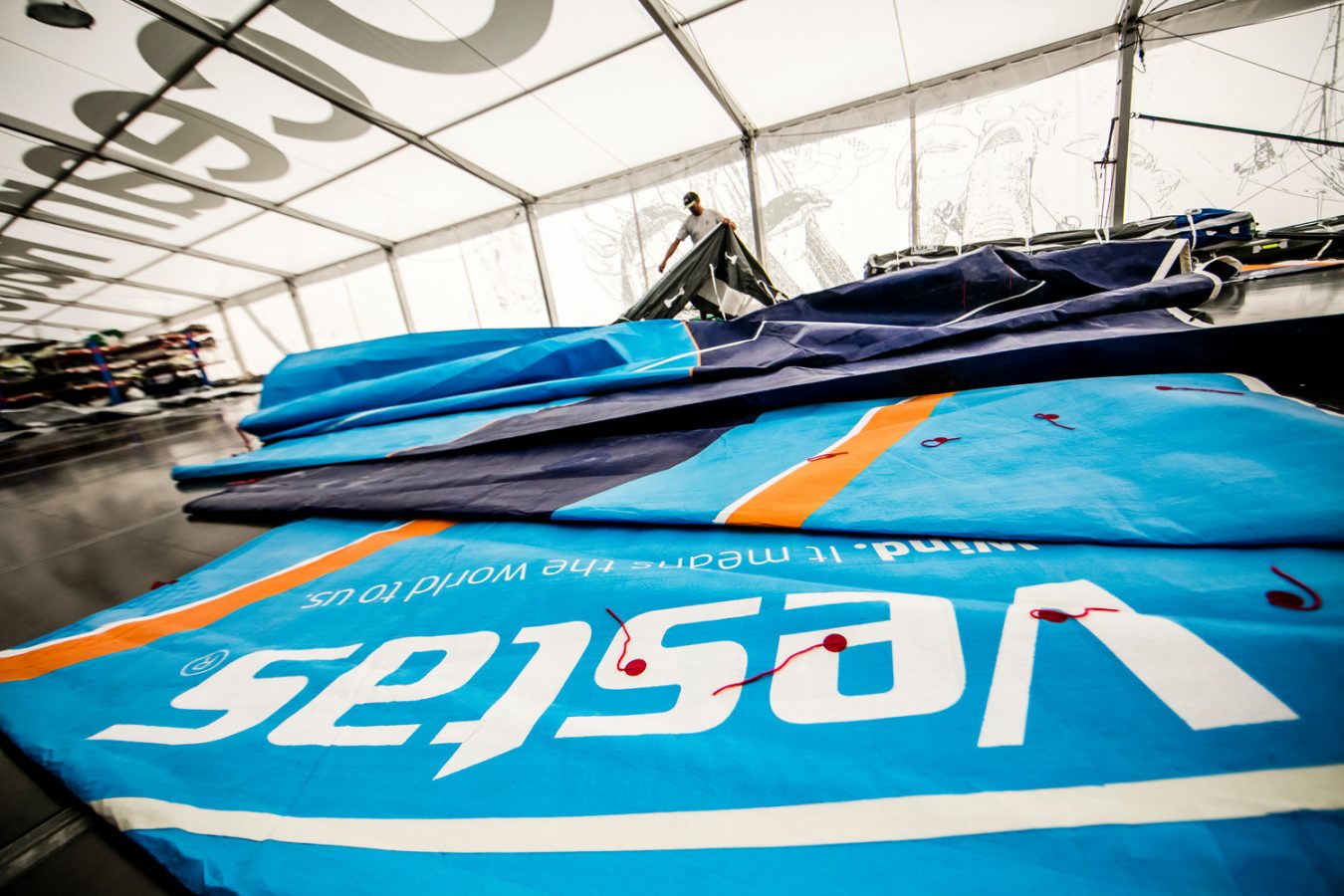 With the Alicante in-port race kicking off this weekend and the start of Leg 1 fast approaching, the Volvo Ocean Race’s Boatyard Sail Loft manager Nathan Quirk and Neil Cox, head of the Boatyard, explain how North Sails 3Di technology has changed the game in port.

It’s been 30 years since North Sails began making sails for the Volvo Ocean Race. During that time North Sails has equipped VOR teams with the highest quality sails to see them through the round the world epic. But a lot has changed in the past three decades, and as the race has evolved, becoming faster, more extreme and more professional, so the demand for cutting-edge sails has grown.

The development of North Sails 3Di technology was in many ways a response to the sailors’ demand for lightweight sails with increased durability. North 3Di sails are made using tiny pre-impregnated filament tapes to mirror the load-bearing and shape-holding qualities of a rigid aerofoil wing while remaining lightweight, durable, and easy to handle.

It was to prove a breakthrough in technology, one that completely overhauled the way Volvo Ocean Race teams approach sail management.

North Sails: What does 3Di technology bring to the Volvo Ocean Race?

Nathan Quirk: 3Di sails stand up amazingly to what the Volvo Ocean Race crews put them through. They push the sails harder than in any race, and yet the sails hold up. Also, the sailors have a lot more confidence in 3Di than other fiber film sails, to the point where most teams don’t take an onboard sewing machine anymore. If you think back two or three races ago, we were taking a lot of repair material and glue plus a 50kg sewing machine on each leg. As 3Di came into the race, teams realized they weren’t making anywhere near as many repairs. Then they started to leave the sewing machines on the dock, and these days most teams don’t even own one. That just shows the progress of these sails over the last eight to ten years. It’s a big change.

NS: How does the Sail Loft work within the Boatyard?

NQ: I have two full-time guys with Volvo Ocean Race, and North Sails supplies two sailmakers for each maintenance period we have. There are five guys in the loft at peak times during the stopovers, which isn’t many when you compare it to the old system, where teams independently managed their loft team – some with three or four sailmakers for their team alone.

Neil Cox: Nathan and the guys in the loft are really smart and efficient about how they do the servicing. They’re aware of how many hours each code has done, so they know which sails have been used the most. They work through the whole inventory knowing which sails have seen more miles. From Nathan’s perspective, the way the boats finish the leg and the way the sails are returned to him is second to none, and that’s reflected in the service they can provide to the teams.

NS: What does 3Di mean for the Sail Loft team?

NQ: We still have to service the sails, check for chafe and stay on top of the general condition of the sail, but we have very, very few major repairs to do. Across the whole fleet in the 2014-15 race, we only had four sails that had problems. Thanks to 3Di we could repair them easily whereas in the past we’d have thrown away those sails. We have five days to service between 50 and 60 sails. Previously teams would re-cut and modify the shapes of their sails to keep them straight and performing at their optimum level. We don’t do that anymore because we don’t have to – we can get these teams around the world with the 3Di sails, and they’re still in great shape.

The mainsails in the last race did 40,000 miles without an issue. Three races ago, each team needed three mains to get around the world, and the course was shorter then.

NS: What financial impact has 3Di had?

NC: It’s definitely made things cheaper for the teams – they can buy two suits of sails and know they could probably get around on one set. The costs are definitely reduced for the Boatyard too – the loft is a tight unit with only three to five sailmakers and they handle the work nicely. It’s helped everyone in the Boatyard.

With 45,000 miles ahead of them, sailors in the Volvo Ocean Race will set off on an eleven leg, ten-month lap of the planet on October 22nd. North Sails 3Di will be their only engine – it’s proven durability and lasting performance backed up with a qualified team of sail technicians. North Sails is proud to provide sails that are not only a result of the company’s long-standing relationship with the race and its sailors; the 2017-18 sail inventory now has proven benefits to sailing performance as well as efficiency in organization, repair and overall cost.