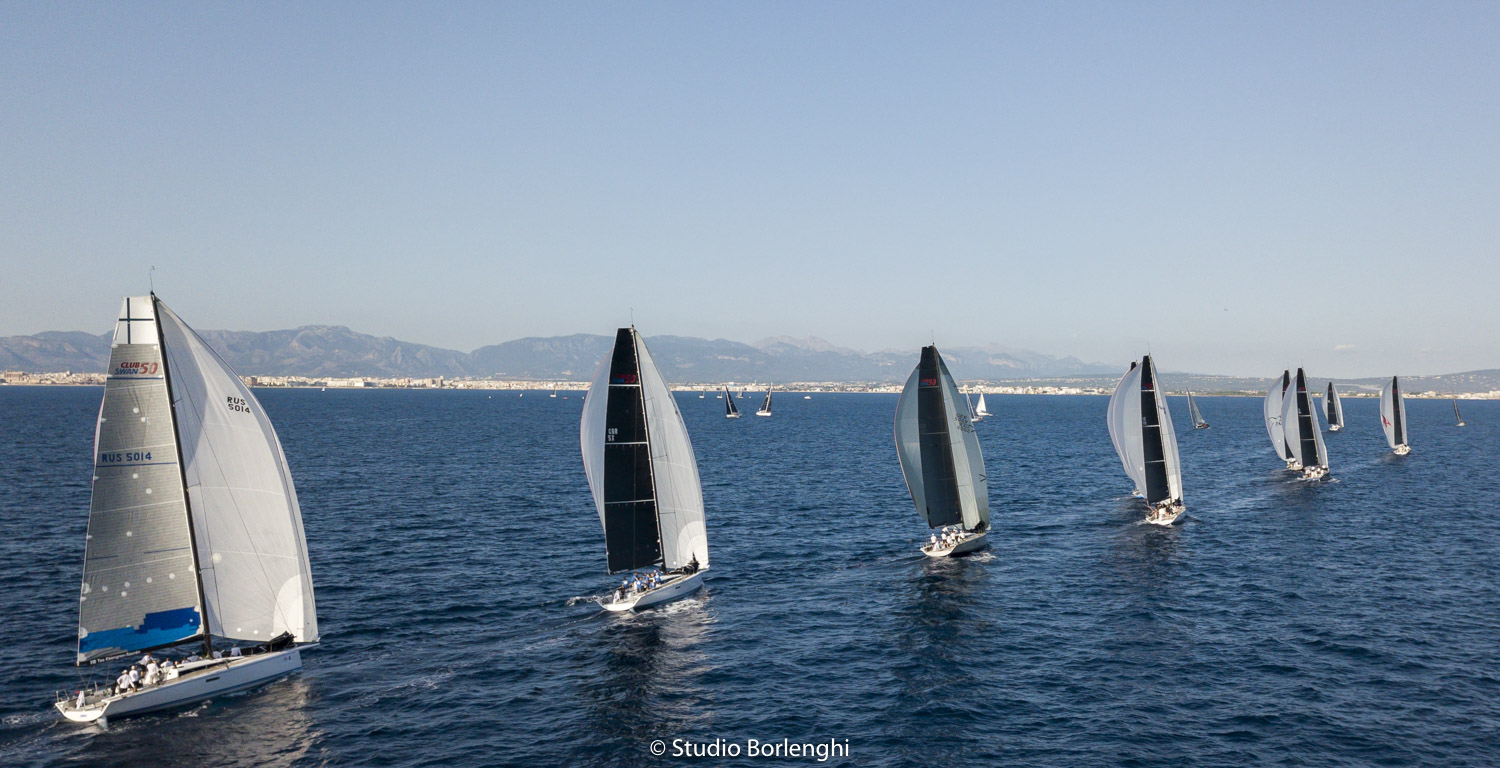 A delay to the scheduled race time on Day 3 of The Nations Trophy only served to build anticipation. Once unleashed the 28 boat, 11-nation fleet did not disappoint.

The already close racing in all three Swan One Design classes was made more exhilarating by seriously close finishes, with boats overlapping and separated by seconds. Yacht racing at its best. Only one day remains.

Spain continues to lead The Nations Trophy standings, while Germany leap-frogged Italy into second with Netherlands in fourth. Extraordinarily, only one place position separates the four national teams.

The individual championships continue to resemble classic dog-fights. Earlybird (GER) has assumed the running in the 11-boat ClubSwan 50 Europeans after a tidy win in the first race was followed by a third in the second. Motions (NED) circumvented Porron IX (ESP) in the 9-boat Swan 45 Worlds by posting a stellar 1,1. Nadir (ESP) increased its grip on the 8-boat ClubSwan 42 Europeans also bringing home a stunning double-bullet.

With a weather forecast seemingly on repeat and crews held on shore once again, there was time for the Swan One Design Class Associations to hold owners’ meetings to discuss the 2018 calendar, various technical matters and other future developments. Management and owners are always looking to improve the collective experience.

Once the AP Ashore was down, crews scrambled to their boats to make sure they took full advantage of the breeze building on the water. Tonight, the Real Club Nautico de Palma switches from racing host to dining host, with The Nations Trophy Owner’s Dinner, graciously supported by Edmond de Rothschild.

ClubSwan 50 European Championship
It was Earlybird’s day. Hendrik Brandis’ team shooting up the rankings into first overall and, in the process, securing a healthy six-point margin over Ulika (ITA), whose 6, 2 was the next best score in class. With four different winners in the races so far, the ClubSwan 50 class is providing intriguing competition each day.

Swedish yacht Ravenger looked to be on course to improve their position with second in the first race, only to let themselves down with an eighth in the next.

Hans Wallen, the tactician, eight-time world champion and Olympic silver-medallist, waxed lyrical about the racing: “This is my first regatta in the class and I’m stoked. It is a super-fast boat, pretty easy to sail, perfectly laid out. Trimming, tactics, crew performance are critical since the boat is really sensitive. You have to work all the time. The competition in this class is incredible.”

Swan 45 World Championship
Motions has been building a head of steam all week. Early results were no indication of today’s perfect play, but a third place in the second race yesterday suggested the Lennard Van Oeveren’s Dutch crew was getting to grips with the conditions on the course.

By contrast, Luis Senis Segarra’s Porron IX had an awful day. A 6,8 score leaving them one point in deficit to Motions and holding onto second from another Dutch boat, K-Force, by virtue of countback.

Former America’s Cup sailor, Jes Gram Hansen is tactician on Motions: “We had two good starts, and had the opportunity to sail some clear lanes. In race one we wanted the left and won the pin end of the line. In the end, it looked like both sides were good and the middle not.

“In race two we looked for a clean start, headed to the right side and with good pressure we managed to sail fast out there. When we came together at the top mark we were up the front again.”

ClubSwan 42 European Championship
If anyone other than Nadir is going to win the ClubSwan 42 Class it will take an immense power-play combined with an unlikely implosion on Pedro Vaquer’s immaculately sailed boat.

No one came close to matching Nadir’s consistency today, with the next best score Pez de Abril’s 2, 6. In the standings, however, only 3-points separate the next three boats so there is plenty of fight left in this class.

In fourth place lies Mela (ITA). Tactician, Enrico Zennaro another eight-time world champion, agreed there is plenty to work for: “Tomorrow is a very important day, because if we sail well we can finish second. If not we could finish fifth, and the podium is certainly our goal. We will play very hard all day tomorrow. No match-racing there are too many involved. We need a good start, good decisions, good manoeuvres and then we have a good day!”

Racing at the 2017 Nations Trophy ends tomorrow with more windward/leeward racing. The first race is scheduled for 12 noon.