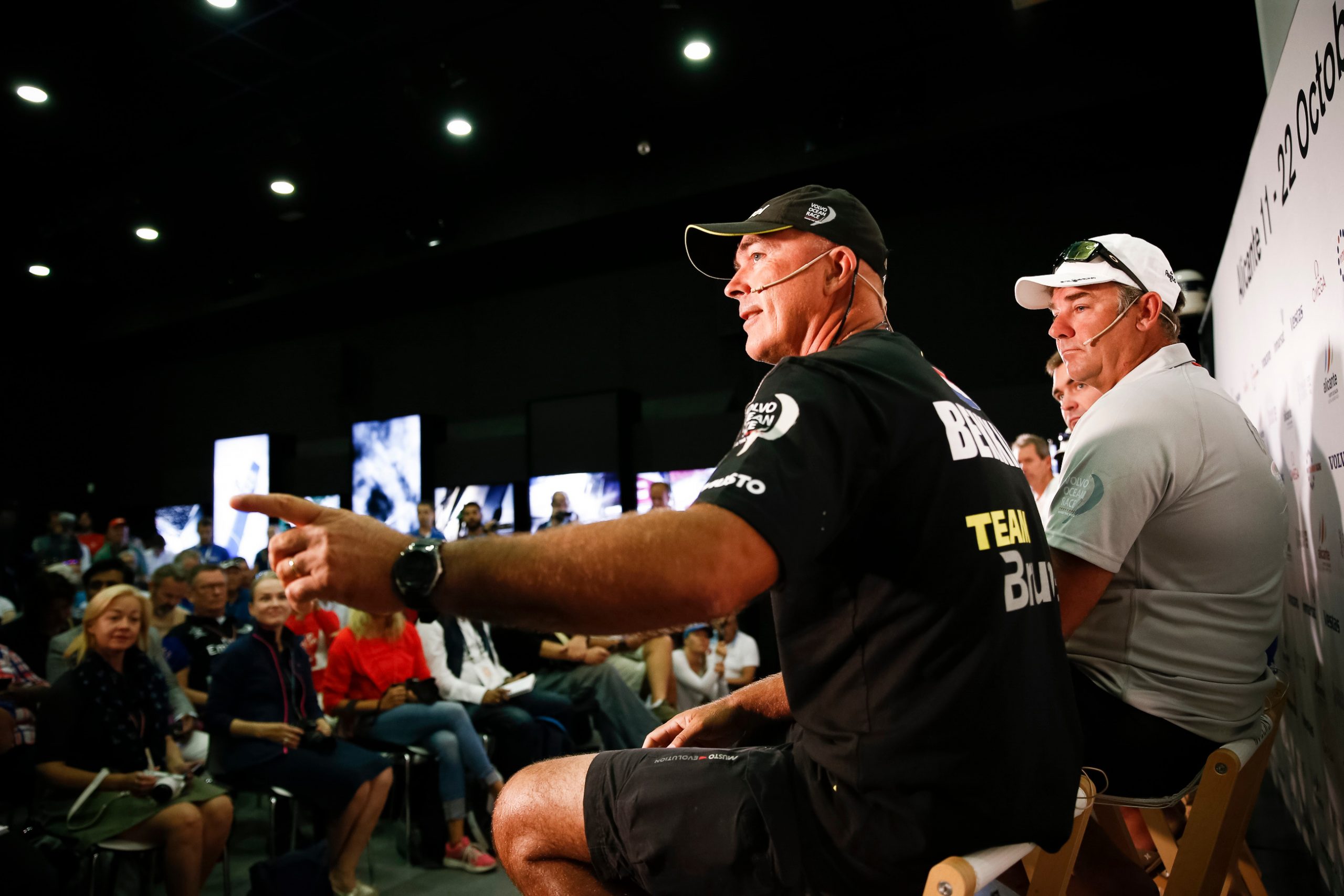 The ultimate test in team sport, the Volvo Ocean Race, starts on Sunday, when seven of the best sailing teams in the world cross the starting line off Alicante, Spain.

The Volvo Ocean Race 2017-18 will test the crews on a 45,000 nautical mile race course, through some of the most challenging waters in the world, including more miles in the extremes of the Southern Ocean.

On Friday, the seven skippers faced the international media at the opening press conference. Below is what they said.

Charles Caudrelier, skipper, Dongfeng Race Team, comparing his preparation for this race, to last time: “Last time, when we started the project, we were in China meeting Chinese sailors who had never spent a night offshore, and teaching them how to sail. This time we started in Lisbon, with a team I already know. Since the beginning we are 100-percent focused on the performance. That makes a big change.

“What’s the difference between doing the race as crew and skipper? The salary (laughing). There’s also the responsibility, of course. When I did the Volvo Ocean Race with Groupama, when I arrived at every stopover my mind was able to switch off. This time, throughout 9 months you never stop. The big pressure never stops. But I have a strong team around me so I’m a lucky skipper I think.”

Dee Caffari, skipper, Turn the Tide on Plastic, comparing sailing single-handed to fully-crewed: “In terms of sailing around the world solo or with a team, it makes a big difference when you have people to share it with and you have more pairs of hands when things happen.

“The intensity is the thing that gave me the buzz in a team environment, and knowing that you’re pushing 100-percent all the time. Your peers around you punish any mistake you make. It’s that intensity that attracts me.

“Everyone talks about Turn the Tide on Plastic as inexperienced. A lot of my sailors are first timers but they are very skilled sailors and they can make a boat go fast. We just need to make sure we don’t make any mistakes – and that we sail to the right place.

“To create an opportunity for young sailors to sail in the Volvo Ocean Race and see them grow and blossom is a great privilege – as well as getting to spread a great sustainability message.”

David Witt, skipper, Team Sun Hung Kai/Scallywag, on his motivation for doing the race and his teammates: “It’s the best team sport in the world, I think. I got a good commercial offer – and I couldn’t find a better way to lose weight!!

“As has been recorded, I’m a lunatic but I think we’re all lunatics together. The young kid (Ben Piggott) started sailing dinghies with me three years ago and ended up here. He’s still dreaming.

“Right now, I’m finding it harder to stay onshore and out of trouble. As long as you have good people around you, it’s fine, and it’s safer on the boat than any other race I’ve been in.”

Brad Jackson, skipper, team AkzoNobel, on taking over as skipper in the week before the start: “Team wise, we’re just focusing on the race. Basically, we have the same team as we had before except (without) Simeon.

“It’s thanks to him that we have the team we have. Not too much has changed in terms of how we’re going to work on board or the crew morale. The last few days we’ve been able to focus on what we’re going to do.

“We were lucky that Rome Kirby was available and qualified and ready to go. He’s another under-30, so that brings us up to 5 Under-30s in the team. It’s a young team but Rome has done the race before with me on PUMA and he has a lot of experience for a young guy. He’s a young, fast guy.

“I’m in this role because it’s necessary, for sure. It hasn’t been a dream of mine to be a skipper. It’s not something I’ve felt the need to do, but the situation has arisen and I’m happy to take it on. I wouldn’t t do it if I didn’t think I had the full support of my team. I hope I enjoy it, I hope it goes well, but it’s not something I’ve been pushing for, or jumping around, saying, ‘Pick me! Pick me!’”

Xabi Fernández, skipper MAPFRE, on being tabbed the favourite based on pre-race results: “For us it’s not about being the favourites. That’s not something we talk about, but we do realise that people think that way. It just makes me think we are ready. We have to sail as fast as we can. I think we are ready but I know these guys around us, on the other teams, are going to be ready as well.

“Hopefully, we can win. I don’t know. We’ve been close before and it didn’t happen. We know how difficult and long it is to win the race.”

Bouwe Bekking, skipper, Team Brunel, on why he keeps coming back and how he recruited his team: “It’s the best thing you can do… Everyone sitting here is a competitor and a sportsman. We all want to win. We have a very good chance of winning this competition.

“We were late at the table but that actually gave us an opportunity. The America’s Cup had just finished. I was racing on the J class and bumped into Carlo Huisman, who had been sailing on Team New Zealand. Through him I got in contact with Pete Burling and the next thing I knew we had the golden boy on the team. He’s won the Olympics, won the America’s Cup, and we also have Kyle Langford, who won the Cup twice.

“The America’s Cup sailors approach the race differently from us, the old school guys. They have a great intensity, and they look hard at everything to do with performance.”

Charlie Enright, skipper, Vestas 11th Hour Racing, comparing his youthful team in the last race, to the experienced crew he has now: “We’re still a young and fresh team. The last time, youth was our thing.

Speaking about the rule change for 2017-18 incentivising the inclusion of female sailors:
Bouwe Bekking: “It’s great for sailing in general. It would have been very nice to choose our own team but as soon as the rules came out, I said we have to have 2 girls on board. We’ve got the best two girls we can. Abby Ehler is our boat captain and Annie Lush running the sail department. They’re great sailors with serious roles.”

Xabi Fernández: “I guess like Bouwe, new rules are always scary but we trialled some people. We have Sophie Ciszek, who sailed on Team SCA. She knows the boat, is very strong, does the bow and is very complete. And we trialled Támara very hard. She’s very talented and comes from the Olympics, having won gold in London. It was harder for her but I’m very pleased that she improved a lot and was able to win her place.”

Charlie Enright: “I was excited to see the rule change. I think the Volvo Ocean Race was right to incentivise rather than mandate the change. We did two trans-atlantics immediately after getting the boat and it was quickly apparent that it was going to be a competitive advantage.”

David Witt: “We’ve always had girls on our team for the past 15 years, so I think we have an advantage here. Steve (Hayles) and I did some math. We think the boats are slow and underpowered at times and we think the lighter you are the better.

“Overall, we think we’ll have an advantage being lighter. We’ve decided to go with eight sailors on board so I can give Steve more support downstairs. Sailing the boat (with 7) isn’t hard but it is tough performing more than one role (and supporting the navigator). Annemieke Bes is another lunatic.”

Dee Caffari: “I would hazard a guess that those who were reluctant to sail under the new rule can now say it’s not that bad.”

The start of the Volvo Ocean Race is at 14:00 local time (12:00 UTC) on Sunday, 22 October. Leg One is a 1,450 nautical mile sprint to Lisbon, taking the fleet through the Strait of Gibraltar, past the island of Porto Santo, and then to the finishing line off Lisbon. The finish is currently projected for Saturday 28 October.

The forecast for Sunday is perfect for start time with north-easterlies of 15 knots in the bay, building to near 20 knots meaning the first part of the leg, to Gibraltar, should be fast, in downwind sailing conditions, with an ETA at the Strait approximately 24 hours after the start.

The start of the race will be live-streamed on www.volvooceanrace.com beginning at 13:30 local time (11:30 UTC).