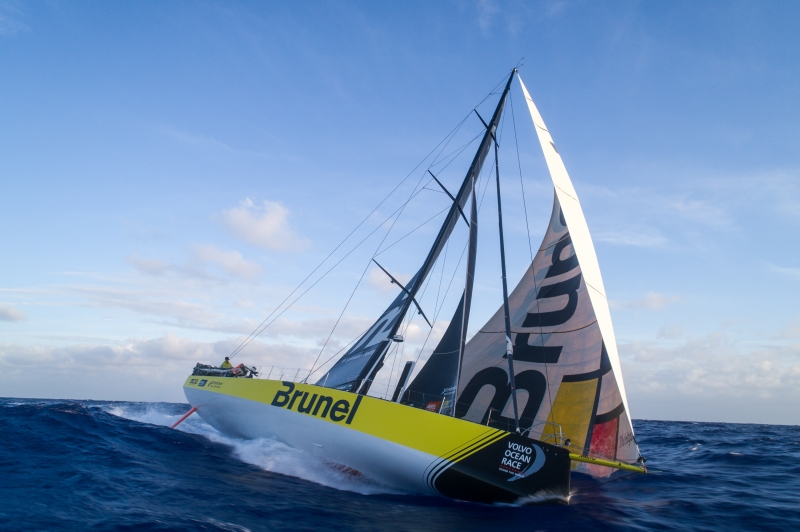 The Volvo Ocean Race teams were preparing to gybe on Sunday and begin the final run into the Leg 8 finish in Newport, USA.

Team Brunel continue to hold the lead although Bouwe Bekking’s team have an advantage of less than nine miles on second-placed Dongfeng Race Team. What’s more, the top five boats are only 36 miles apart after 14 days at sea and with just over 500-miles of race track still remaining.

The positions are so close as the fleet draws level with Bermuda that it would be a bold call to make as to which team will arrive in Newport first.

Currently predictions are for top six teams to arrive within six hours of one another, between midnight and 0600 UTC on Tuesday (2000 to 0200 on Monday night local time in Newport).

Speeds were down to the mid teens as the fleet feels the effect of the Bermuda High, an 800-mile wide anticyclone to their east. As the crews skirt the western boundary of the high, they will gybe and be able to point their bows towards Newport for the sprint to the finish.

“The ‘bleeding’ compared to Dongfeng has stopped,” Bekking wrote. “The closest they got to us was 2.6 miles, we could read the sign writing on their sails.

“We had the plan not to match their angles. They sailed higher and faster, plus had better breeze. All the forecasts we had said that being west would be the way to go in the long run. Also that way we kept basic sailing rule number one in place – stay in between the finish and your opponent. Slowly but surely it started paying off and we started edging out and they are now just over eight miles dead upwind (behind) of us.

“I am sure they are kicking themselves, as 24 hours ago they were more west than us. We matched last night two gybes against them, just to keep it simple and not to let them off the hook.”

Despite effectively being level with Team Brunel, Vestas 11th Hour Racing are further east, closer to the high – and that could have implications over the remaining hours and days of Leg 8.

“For the briefest of moments it looked like we have been able to get to the top of the leader board, in fact it was tantalisingly close at one point,” Vestas 11th Hour Racing’s navigator Simon Fisher said. “However, the reality is although we have got close to Brunel and Dongfeng in terms of distance to finish they are currently placed a little more safely on the outside of us as we approach the Bermuda High. With that said though if we can hang on to them for the next 18 to 24 hours it could all be to play for once we gybe onto port and approach Newport.”

Once on the road to Newport, the fleet will have to contend with a cold front harbouring winds of more than 35 knots, before facing a tricky transition into north-easterly breeze.

It means the Leg 8 podium could well be decided in the final 24 hours – and every moment up until that point could have its consequences.

“The truth is that in the next 36 hours there is still a lot to come,” said Xabi Fernández, skipper of fifth-placed MAPFRE. “We have a low pressure coming with plenty of wind downwind where we will need to push all we’ve got, and then we have to cross a front to get to NE winds which will be challenging and pretty cold I’m sure.”

With fourth-placed Turn the Tide on Plastic around nine miles directly west of MAPFRE, Fernandez said his crew would aim to repeat their success in Leg 6 into Auckland when they overhauled their rivals in the final few miles.

“We still remember how much we had to push to get them in Auckland and I’m sure this time is going to be even more difficult but that is our goal right now,” Fernández added.

The race tracker remains live for what is looking like will be a thrilling finish to Leg 8. Be sure to follow it for all the latest positioning.