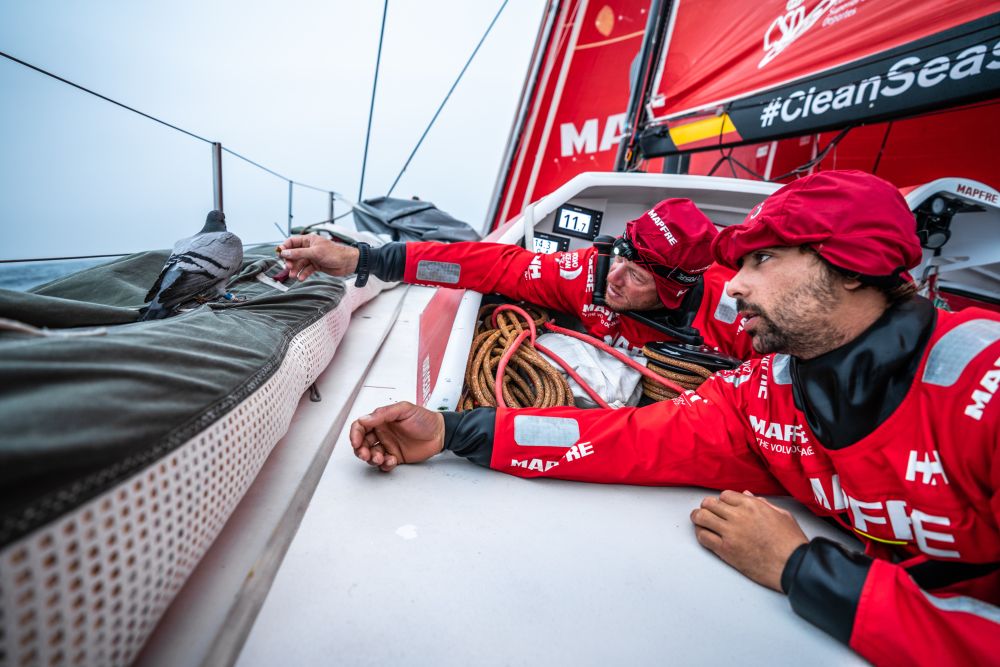 Less than a mile separated Volvo Ocean Race Leg 9 frontrunners Team Brunel and team Akzonobel on Monday as the teams prepared to enter the final 100 miles.

After almost eight days of intense racing across the Atlantic from Newport, USA, to Cardiff, Wales, the leading pair were today neck and neck. To add to the intensity third-placed Dongfeng Race Team, desperate to avenge their Leg 8 result when they were forced off the podium into fourth in the final few hours, were just 11 miles from the front.

With winds dropping to under ten knots, an anxious, slow-motion finish is on the cards for Leg 9 as the teams try to pick out the quickest route to Cardiff, with at least four teams in play for the leg win.

While the lack of breeze isn’t helping, the real challenge will be to navigate the tidal current the fleet will encounter in the Bristol Channel.

If a team is fortunate enough to arrive in the channel at the right time they could be rocketed towards the finish line. If they get unlucky they could face up to six knots of adverse current sweeping them back out to sea. It makes for a tense time for the sailors but especially the navigators, tasked with directing their crews through the tactical minefield.

At the front of the fleet, veteran Volvo Ocean Race navigators Andrew Cape (Brunel) and Jules Salter (Akzonobel) were preparing to face off for Leg 9 glory.

“We’re into the last 24 hours and neck and neck with Brunel,” AkzoNobel’s Emily Nagel said. “The wind is going to be up and down, there will be plenty of tacks and we’re not going to get much sleep. It’s going to be a real tactical battle, especially for Jules.”

While Dongfeng remain in touch with the leaders, Vestas 11th Hour Racing in fourth were almost 30 miles behind while overall race leaders MAPFRE were 60 miles back in fifth.

A podium result for Dongfeng could see them usurp MAPFRE from the top of the overall scoreboard with just two short legs remaining. But in trademark style, skipper Charles Caudrelier said his team were focused on overhauling the two Dutch boats ahead of them and scoring their first leg win.

“Our dream is to have a leg win and get revenge for Leg 8,” Caudrelier said. “Brunel and AkzoNobel have sailed well from the start but now they’re fighting together there’s a chance they could make a mistake if they get too caught up with each other.

“They have a good lead now but it could be reduced to nothing by the time we get to the bay.  The problem isn’t the wind, it’s the current, but we have a plan, and I think it’s a good one.”

Despite little opportunity in the weather forecasts for an overtaking move, Xabi Fernández’s MAPFRE crew vowed to keep fighting until the Leg 9 finish line.

“We’re in pretty big trouble now – Vestas 11th Hour Racing are 30 or 40 miles ahead of us and the other guys even further,” crewman Blair Tuke said. “We were hoping there was going to be some sort of compression but it doesn’t look like that’s going to happen.

“It’s going to be light, but the guys in front won’t completely stop. It’ll be difficult to catch them, but we’ve got 24 hours to go and we won’t give up.”

The latest ETAs see the leading pair arriving after 0200 UTC on Tuesday May 29, with the remaining boats arriving throughout the day.

Stay tuned to the race tracker to follow all the action from the final miles of Leg 9 live.