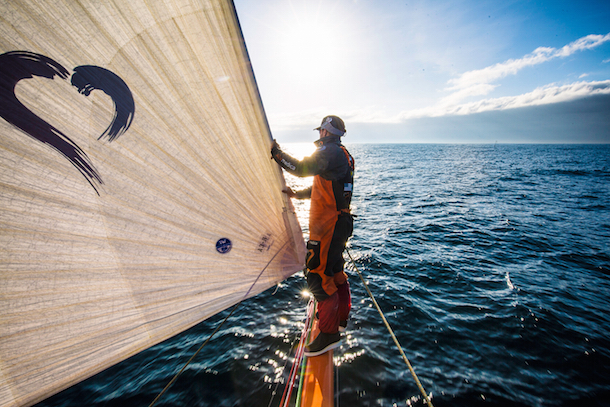 Team Brunel were on Tuesday battling towards possible victory in Lisbon on Leg 7, just over two weeks after skipper Bouwe Bekking (NED) had declared that he feared their challenge for the overall Volvo Ocean Race trophy was likely to fall short.

The Dutch boat had eked out a 6.6-nautical mile (nm) advantage over MAPFRE (Iker Martínez/ESP) in optimum sailing conditions during the final ‘sprint’ towards the Portuguese capital in the transatlantic stage from Newport, Rhode Island (Tuesday, 1244 UTC).

Team SCA (Sam Davies/GBR), meanwhile, were still trekking north of the fleet, but had lost the stronger breeze which had helped the women’s crew make up an 80nm deficit on the pack on Sunday.

So the 12th edition’s second and final 2,800nm transatlantic crossing is, once again, heading for a nerve-wracking, too-tight-to-call climax with the latest predictions forecasting a finish of around 0600 UTC (0700 local time)  on Wednesday morning in Lisbon.

Victory in the leg will surely taste sweeter than most for Team Brunel skipper Bekking.

The 51-year-old had to order the abandonment of his sinking boat, movistar, in the 2005-06 edition at the same stage in the mid-Atlantic, a painful episode he had assured reporters last week that he had put behind him.

On arrival in third place in Newport earlier this month, he had glumly conceded that his record-equalling seventh bid for offshore sailing’s leading event looked to be heading for disappointment, with Abu Dhabi Ocean Racing 10 points clear of his crew.

However, if the current positions stay the same on this stage, they will cut that deficit by four points and leave the Dutch with a mathematical chance, at least, of catching the Emiratis in the last two legs to Lorient and Gothenburg, the latter via a pit-stop in The Hague.

Certainly, the mood on board Team Brunel early on Tuesday was buoyant, but totally focused on the finishing line.

Their closest pursuers, MAPFRE, however, are equally determined to snatch their second leg victory following their triumph in the fourth stage from Sanya, China, to Auckland, New Zealand.

MAPFRE’S skipper Iker Martínez, the joint 2004 Olympic 49er champion with co-skipper Xabi Fernández (ESP), wrote: “Even with Team Brunel enjoying a very good advantage, the winner will not be decided until we cross the finish line. That being said, the three top boats are also in a very, very good position with regards to the rest.

“We are now focusing our energy on making the right decision as to where to cross the Traffic Separation Scheme ahead, and sailing as fast as possible as to keep up with Dongfeng and Team Brunel, and ahead of the chasing boats.”

The boats’ finish in Lisbon is to coincide with the arrival there of the rebuilt Team Vestas Wind (Chris Nicholson/AUS), which is expected to reach the city in the early hours of the morning via ship and road following a journey from Bergamo, Italy.

The fleet, seven-strong for the first time since November 29, when Vestas Wind struck a reef in the Indian Ocean on Leg 2, will then have an 10-day maintenance period before returning to competitive action on June 6 for the In-Port Race, before the Leg 8 departure for Lorient a day later.