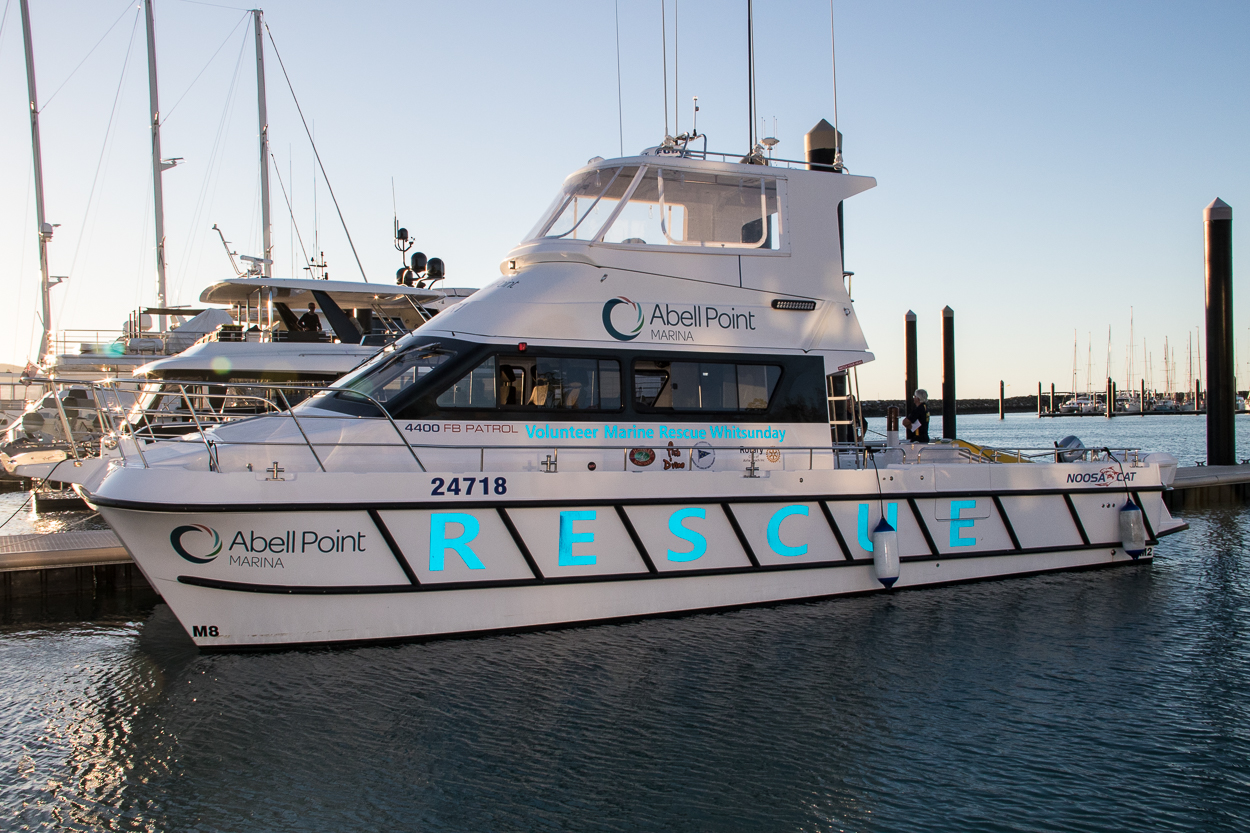 In a ceremony hosted at Abell Point Marina last week, VMR Whitsundays delightedly announced the arrival of their new rescue vessel. Abell Point Marina VMR 1, as it has been named, has been 10 years in the making and certainly a labour of love for the VMR committee.

After the old VMR rescue vessel and radio base in the Whitsundays suffering damage during TC Debbie, the timing of the new rescue vessel couldn’t be better allowing VMR to get back to full capacity servicing the boating community of the Whitsundays. Partially funded by the VMR itself, as well as sizeable donations from Rotary Club of Airlie Beach, VMR Brisbane and major sponsor, Abell Point Marina, the fundraising effort for the new vessels has been taking place over the last few years and driven by the volunteer committee themselves.

Abell Point Marina General Manager Luke McCaul says of the sponsorship “With the Whitsundays being such a large boating community the services of VMR are essential. As the largest marina in the region, we are pleased to be able to sponsor the new rescue vessel, Abell Point Marina VMR 1, and provide premium berthing for the vessel to assist with the responsiveness and rescue efforts of the dedicated VMR crew.”

VMR Whitsundays covers a 13,000 square metre area of ocean/ coastline known for its coral reefs, fast flowing currents and notorious wind-over-tide sea conditions. In addition, being the busiest private and commercial boating community in Australia, the volume of vessels on the water at any given time in the Whitsunday region creates a high demand for the services of VMR. The new vessel will allow VMR Whitsundays to assist other VMRs in the area when their vessels are not available.

The vessel itself is a 12m NoosaCat with twin Cummins diesel engines, specifically designed and purpose built as an offshore rescue vessel with a flybridge, as absolute must for visibility around the fringing reefs of the Whitsundays and for search and rescue operations in adverse conditions. The larger fuel capacity will allow for 300nm’s which is beyond VMR Whitsundays operational area, but allows a considerable safety margin for long tows.

VMR Secretary, Roger Wodson says of the new vessel “On behalf of VMR Whitsundays I would like to thank those members of the committee, our sponsors, Rotary Club of Airlie Beach, VMR Brisbane and the local community for supporting the fundraising effort to generate the funds for this vessel. It has been 10 years in the making and its arrival will make a difference to the boating community of the Whitsundays.”