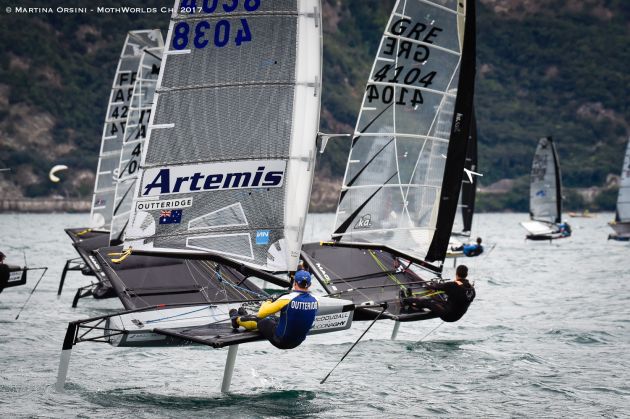 There was still a lot of summer thunderstorm activity in the Lake Garda region but finally, racing got underway today on day two of the McDougall + McConaghy Moth Worlds 2017 hosted by Fraglia Vela Malcesine.

The 220 entrants from 25 nations were split into four groups, Yellow, Red, Blue and Green Qualifying fleets. Because of the lack of racing yesterday (Tuesday), racing was re-scheduled for early starts this morning (Wednesday).

When the first two groups left the shore it was a cool morning with semi-overcast skies and light to moderate but unstable breeze from the North and some big waves. However, this was not the usual reliably strong Pelèr and racing faced a number of disruptions during the morning session.

PRO Tim Hancock and his team from Fraglia Vela Malcesine did an excellent job of getting two races in for each group before the breeze shut down for its lunchtime siesta.

All fleets came ashore with the hope that the afternoon Ora would blow from the South, but not for the first time this week, we were foiled. So just two races were completed for each fleet.

The Yellow and Red fleets were sent out for a 08.30hrs start to catch the morning breeze. On the Yellow course, off Malcesine it was blowing 12 – 18 knots with some waves, causing a number of breakages and capsizes. By the second race, the breeze and waves dropped off to a more manageable 10 – 15 kts from the North.

Nathan Outteridge (AUS) won the first but suffered a broken stay in the second having to return to the Moth hospital onshore for surgery. Despite not finishing, he did get a score of 42 due to finishing the opening lap but it is a setback. Nevertheless, onshore Nathan remained up beat. “It's not how you want to start your worlds but still.”

Ben ‘Patonator’ Paton (GBR) sailed two solid races scoring 2,2, but was a bit disappointed to lose the first to Nathan Outteridge by ditching on his final gybe to the finish.

Another favourite to suffer damage was Scott Babbage (AUS) who broke a push rod in race 1 to start on the back foot, but recovered with a bullet in the second race of the day.

One of the Corinthian sailors, Luka Damic from St Georges SC in Sydney enjoyed a great start to his worlds with a pair of thirds.

“We were on the Southern course early in the day and there were big waves and 14 – 18 kts of wind and I’m a big heavy guy, 95 kilos, so that suits me fine. For the second race the breeze started to drop off and the sea state dropped off which also suits me quite well so I managed to pick up two 3rd’s.”

Luka is racing a home built boat and is happy with his new rudder design which he built himself and was on trial for the first time, passing with flying colours.

Annalise Murphy (IRE) endured lots of capsizes in her first race but enjoyed a big improvement in the 2nd race with an 8th and is leading female overall.

On the Red fleet course the waves were a bit smaller and the northerly breeze a shade lighter 9 – 15 knots closer to Torbole.

Rob Greenhalgh (GBR) wasted no time with a bullet and a second. Fellow Brit and former training partner Dave Hivey, scored two excellent results as top Corinthian in the group.

“It was good fun, we had a decent northerly wind and some pretty big shifts but there was definitely a few holes in the wind. I need to work on my downwind speed a bit but I was pretty quick upwind and getting off the start line well. The main event for me is I want to be the first Corinthian.” He said on shore.

The overall leaderboard was stacked with sailors from the Red group. The talented foiler from Australia, Harry Mighell picked up two great results of 7,1 and Olympic Gold medallist Iain ‘Goobs’ Jensen (AUS) scored two bankers 6,3, although he wasn’t entirely happy with his set up. Steve Thomas from West Australia scored 4,5, and a young Italian sailor studying in Sydney, Gian Maria Ferrighi came ashore with a 3,7.

By the time the Blue and Green fleets went out mid morning, the breeze was already beginning to fade from 10 knots to 5-6 knots and the patches meant most sailors were having difficulty staying on the foils.

The first race of the Blue fleet was a bit of a Laser fest with London 2012 Olympic Gold medallist Tom Slingsby (AUS) taking the gun from Rio Olympic gold medallist Tom Burton (AUS) in 2nd.

Tom Slingsby also scored a bullet in the 2nd race of Red group to sit on top of the overall table on day 1 of qualifying.

“It was a tricky day with the dying breeze in the morning but I think more than anything I got the foil selection right, I hedged that the breeze was going to die sooner than later so I went big front foil and big back foil. In the dying breeze, I think that was what the big factor was.”

“The first race was a bit of a battle with Tom Burton and then the second race was up and down. Rob Gough caught right up but then I got back on the foils and he fell off, so I snuck a way again.” Tom said on shore.

Another amateur club sailor, Jim McMillan from Stokes Bay SC in the UK was a bit surprised to come ashore and see a 3rd & a 4th next to his name.

“I was pretty surprised actually to come away in the top 10 in my first Moth worlds race. I was actually a bit late for the start so I tacked off, banged the right-hand side and tacked to find I was leading at the windward mark.”

“But Tom Slingsby was very quick upwind and downwind, he got me on the second beat along with Tom Burton. But I was very happy to come away with a 3rd in my first worlds race.”

The Green fleet sailed in similar conditions to the Blue fleet, very light and patchy. This fleet was randomly loaded with three former world Moth champions. One of the hot regatta favourites, Paul Goodison (GBR) wasted no time chalking up two wins although he was made to work for it.

Behind him, ‘Pistol’ Peter Burling (NZL) was back out after some minor surgery over night in the Moth hospital. Pete was breathing down ‘Goody’s’ neck finishing the day with a 2,3.

The third former world champion, Josh Mcknight (AUS) sailing his own design of Moth finished the day with a very respectable 4,4. In this group, a number of sailors had one good score and one slightly average score but the conditions for the Blue and Green groups were tough even for the top pros.

The Qualification Series racing continues on Thursday 27 July with another early start for the Green and Blue groups of 08.30hrs (local time). Red and Yellow groups will not be sent afloat before 0945hrs. The intention of the PRO is to try and get at least 2 races per fleet completed.