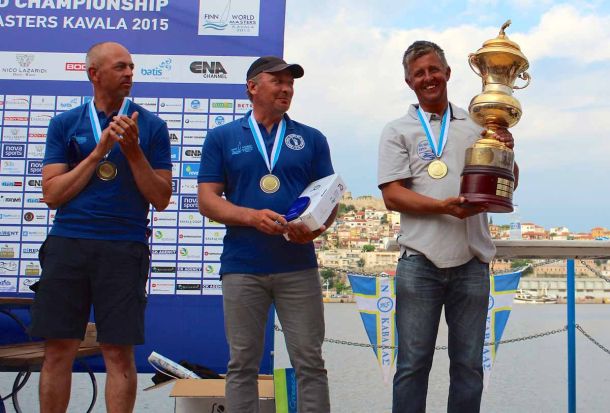 A third place in the medal race was enough for Vladimir Krutskikh (RUS) to take the overall victory at the Finn World Masters in Kavala, Greece. Dmitry Petrov (RUS) took the silver while Giacomo Giovanelli (ITA) snatched the bronze.

It has been a difficult week weather wise in Kavala, and the final day was no different. The final race never happened. The fleet sailed out to the race course in a solid offshore force 4 but Yellow Group only got as far as the windward mark before the race was abandoned as the wind disappeared. However the sun had returned by then and the temperature started to rise. Almost an hour later the race officer abandoned for the day with the time limit approaching and the medal race still to run.

The medal race was held close to the shore to give the spectators a chance to see the top sailors in action. A light wind gradually filled in from the sea, but the first attempt was abandoned shortly after the start as the wind again switched off for a short time. A light breeze 10 minutes later allowed the race to be restarted but it was barely more than 5 knots at any time. The left side provide the best wind with Thierry Van Vierssen (NED) emerging with nice lead to head the fleet at the first mark from Petrov and Krutskikh. Nothing much changed at the front as the race developed except Van Vierssen extended for a comfortable win.

Giovanelli had closed on the leaders and almost took second, but trailed Petrov and Krutskikh across the line, all three boats locked together for the final gybe. Yuri Tokovoi (UKR) and Martijn van Muyden (NED) placed ninth and eighth to drop out of the medals while a second for Petrov gave him silver and fourth for Giovanelli have him the bronze.

Race winner van Vierssen, said, “There was no pressure for me. The other guys were so busy, but for me it was just a fun race so I just wanted to get free and sail as free as possible. I looked at the sides, and luckily for me I had some extra space and my speed was good. It was actually the same story as the last race I won. If I am free I can sail. And these conditions are ideal for me. Downwind was tricky as I wanted to go left to control the fleet on the right, so I had to gamble a little bit, but there was still wind so I could easily make more distance. And the last beat it was just tacking on the shifts.”

“I don't sail so much but my story at the Masters is always the same. I am not so good at boat handling so I rock a lot and the jury penalise me quite a lot. I was never in the top ten before this year.”

At his first Finn World Masters, Giovanelli took the bronze medal. He said, “The week was perfect for me. Everything went well and also in the medal race I had a couple of gusts to pass my competitors. The week was very difficult for the conditions and the competitors.”

On his expectations. “I was expecting a good level, but my goal was to be top 10. Some of the others are much stronger than me, for example the Russians, and they are very good sailors so I am pleased to be among them.”

Runner up, Petrov, said, “Thanks very much to the organisation, because the event is perfect at my first Finn World Masters. I very much like the fleet and the friendliness of everyone and how it has been planned and that we kept to the schedule. Vladimir is a stronger sailor so it's OK that he has won. Everything is OK and I am really satisfied with my result. I will come again again next year.”

New Masters World Champion Krutskikh said, “It's a surprise but today the wind was very tricky and after the first start I had a bad position and was a little nervous and I was happy when they put the November flag up. So on the next start I was concentrating harder. For me I had two ideas. The first was to go my own way and the other was to stay with NED 12. He is a very good sailor and he was very close to me. I started two metres to windward of him and I had good speed and I killed him.”

“I am very happy with the result. I thought maybe myself and Yuri would be fighting for the title. He is a very clever sailor but the other guys are also very good and they made it very difficult for me. I hope to be back next year and thanks to Lanfranko Cirillo for me and Yuri. It was his idea to come. He gave us fantastic boats and sailors and pushed us to go sailing.”

The top five sailors were all sailing in their first Finn World Masters, highlighting a step change in the dynamics of the Finn World Masters. It is starting to appeal to many more past Olympic campaigners, and there are many more waiting in the wings to rekindle their Finn campaigns. Many of the top performers of the past few years didn't figure in the overall results and the feeling is that the new blood has opened a new era for the Finn Masters, one of new faces and more competitive, athletic racing, with rock star names dominating the top ten. Perhaps this week the Greek gods have reshuffled the deck. The next time we'll get a chance to find out is at the 2016 Finn World Masters, which will be held in Torbole, Lake Garda.