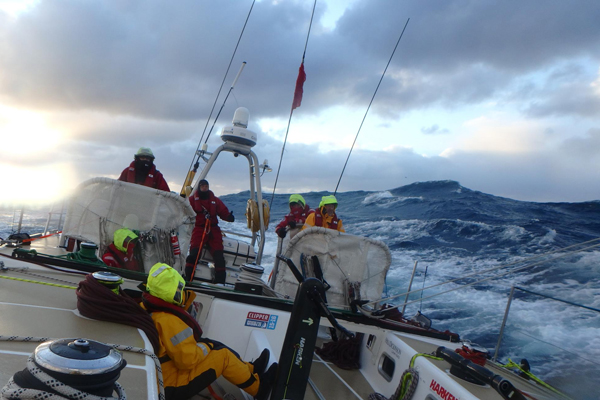 It has been a tumultuous night, with the fleet experiencing a violent storm which delivered some of the worst conditions of the entire circumnavigation. Gusting winds of 70 to 80 knots tested the teams’ will, with extended periods at 55 to 60 knots and a very rough, steep sea state, sending gallons of water over the cockpits, making it exceptionally hard to helm a course upwind.

The teams battled to reduce sail plans, with evolutions taking much longer than usual in the wild conditions, but Skippers praising the stoic nature of their crews in the weather, which was much worse than forecast.

Plummeting temperatures in the Yellow Sea – some 200 nautical miles from this Sailing City • Qingdao Cup Race Finish into China – also brought hail, sleet and rain to challenge the crews further.

The wind has now decreased, with speeds of around 20 to 25 knots, but rough sea states are still being reported.

Derry~Londonderry~Doire is leading the fleet again, with Garmin close behind 11 nautical miles away, and LMAX Exchange, which was first yesterday, is now in third 76 nautical miles behind the leader.

“There was spray everywhere, gallons of water being thrown over the bow and the deck as the boat crashed into a huge, steep sea. If we had been cruising on almost any other type of boat, we would have been in survival mode. However, as the Clipper 70s are so robust, we were able to continue to race, albeit with a very limited sail plan,” Ash added.

Greg Miller, Skipper of Mission Performance, in fifth place, a former Soldier with vast experience of sailing different vessels in varying conditions, said it was one of his worst days at sea. “There was Force 8-9 massive short seas and full cloud cover. Falling off of massive waves and crashing sideways into the trough beside it is not very much fun, and the tacking angle we got was absolutely shocking.

“Onwards towards Qingdao in our sturdy steed that will see us through thick and thin, the hard and the easy times. We are back to where we were this time yesterday, so I am not going to enjoy looking at the race positions today!” Greg added.

With 100 to 400 nautical miles to go until a warm Chinese welcome in Qingdao, China’s Sailing City, who will be victorious?

Due to the rough conditions, the ETAs into Qingdao have been pushed back slightly. See here for the latest ETAs.

All positions correct as of 1000 UTC.