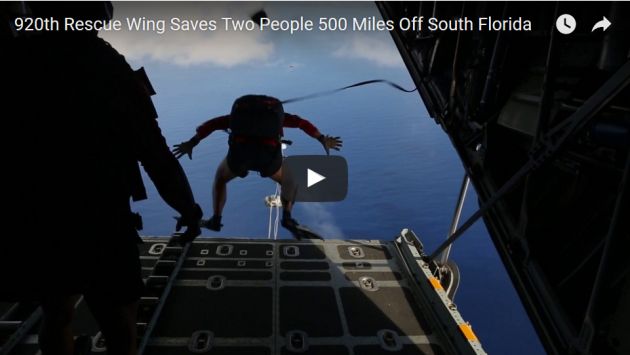 What do you do when people are in trouble but outside of Coast Guard helicopter range? Send in the paratroopers, of course, as Maritime Executive reports:

On July 7, eighty U.S. Air Force personnel and four aircraft from the 920th Rescue Wing participated in a successful rescue of two German citizens about 500 nm off the Atlantic coast of Florida. The two men had been injured when their vessel caught fire.

The rescue distance was beyond the round-trip range of Coast Guard SAR helicopters. To reach the victims, USAF ground crews at Patrick AFB prepared and launched an HC-130P/N long distance SAR aircraft with a six-man pararescue jump team. Master Sgt. Isabelle Kliergraham, a noncommissioned officer assigned to the 920th, joined the flight to provide on-scene translation for the two German survivors.

The aircraft met the merchant freighter Nord Nightingale at the scene of the accident.  The jump team parachuted out of the aircraft and into the ocean at the victim's location. Nightingale deployed a small boat to meet them, and the airmen pulled the victims on board and picked up bundles of airdropped medical supplies. They returned to the Nightingale to prepare the victims for extraction.

At about the same time, two Air Force HH-60G helicopters took off from Patrick AFB to rendezvous with the Nightingale. Unlike the Coast Guard HH-60J, the Air Force edition of these aircraft comes equipped with an in-flight refueling probe, and the two helicopters met up with the HC-130P/N to top off their tanks before proceeding to the Nord Nightingale's location. They recovered the rescue team and the victims from the deck of the Nightingale and returned to shore, with a second HC-130 providing an extra fuel reserve if needed.

The helicopter crews landed the victims at Orlando High School's football field, where they were picked up by the Orlando Fire Department for transfer to a medical center.

Aircraft commander Capt. Dan Morgese credited fine weather, training, good comms and a skilled ground crew with the success of the mission. “Anytime you are putting someone out over the Atlantic, it’s concerning,” he said. “We train for this. It all worked out just fine. If there was a day to do it, it was today; the weather was perfect.”