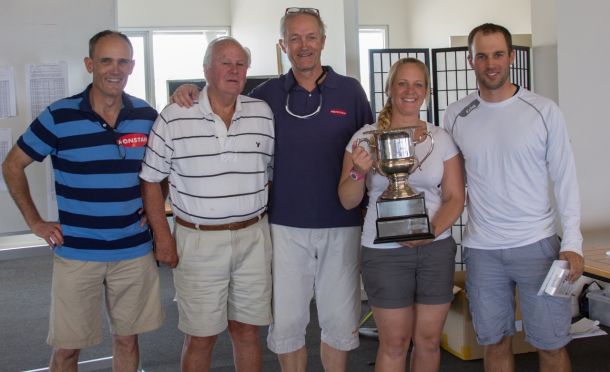 13/03/2015
With the current World Champions out of action (Chris Dance overseas, and Peter Hackett recovering from appendicitis) we were lucky to have Navy Sailors and World Champion Rick Longbottom and Darryl Bentley to take on our other World Champions, Paul and Bronwyn Ridgway, to make it an interesting fight at the zvictorian Tasar Championship.
With three races on day 1 it looked like the top place was going to be a good fight between them two of them, but Peter Ellis and Charlotte Birbeck, had other ideas. By the end of the first day each pair had a 1 and a 2 with Paul and Bronwyn leading the others by 2 points. With a 1,1,2 on day 2, Pete and Charlotte then took the regatta by the scruff of the neck and led with a 5 point lead over Paul and Bronwyn.
This set the scene for an exciting two races on the final day.  With the wind moving around and moderating, Safety Beach Sailing Club PRO, Geoff Eldridge, ensured the start was fair and got off two good races before the wind stopped completely.  In the first race Paul and Bronwyn laid down the gauntlet with an emphatic win ahead of class legends from two decades ago, Glenn and Vanessa Collings.  With Peter and Charlotte further back in the ruck, the championship became a 1 point regatta, with Paul and Bronwyn needing to win or beat Peter and Charlotte by more than one boat to take the trophy.
In the final race, Peter and Charlotte took the conservative option to just stay with Paul and Bronwyn. On the first beat the wind faded on the edges and both boats were well back.  This allowed for newly weds Chris and Mandy Green to lead from start to finish.  The others fought their way back with Paul and Bronwyn just in front of Peter and Charlotte. On the last run to the finish, with a dying breeze, wind came from both sides to only die again. The boats between Paul and Bronwyn and Peter and Charlotte kept changing, but at the last turning mark before the reach to the finish, Peter and Charlotte managed to hold the required spot and win the championship on count back.
The Safety Beach Sailing Club team ran a magnificent regatta both on the water and off the water, and it was great to see so many new faces turning up for the competition.  The full results can be found at http://www.tasar.org/media/3988/2015 results.pdf.
The next big event on the Tasar calendar is the NSW state titles at Lake Illawarra and the Australian Championships at Townsville in September.  Check out the details at http://www.tasar.org/major-events/upcoming-events/2015/09/43rd-australian-nationals-townsville,-qld/.
– Chris Payne