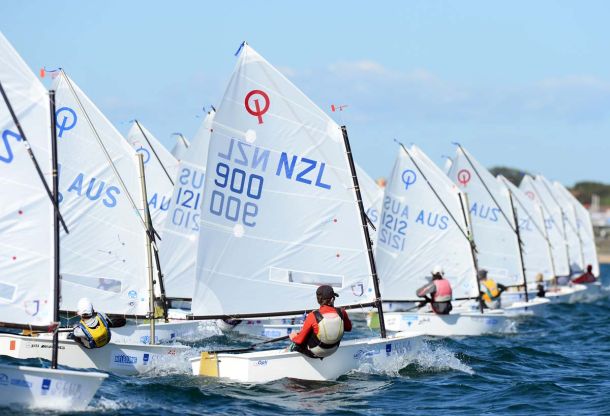 The 2015 Victorian Optimist Championships get underway tomorrow at Royal Brighton Yacht Club – 132 competitors have already registered for the regatta that is being held over the Labour Day long weekend, providing three days of racing. Eighteen entries from New South Wales, along with visitors from Queensland and South Australia will provide additional competition for the Victorian sailors.

Over 50 entries have been received for each of the Open and Intermediate fleets, with the Green fleet smaller in number. Yachting Victoria is also conducting a Tackers Carnival in conjunction with the event. In total, over 150 Optimist sailors will be at Brighton for the weekend.

A number of Victorian clubs will be fielding strong teams for the championships, with top placings likely to go to sailors from Sorrento, Black Rock, Mornington, Sandringham and Brighton.

The weather forecast is looking good, with moderate temperatures and a variety of wind strengths to test the sailors’ skills across the 3 days. Up to 9 races can be conducted for each of the fleets.

A skilled race management team has been assembled for the event, drawing on a number of clubs around Port Phillip. Black Rock Yacht Club, Sandringham Yacht Club, Royal Melbourne Yacht Squadron and Mordialloc Sailing Club are supporting organisers Royal Brighton Yacht Club with boats and volunteers. There will be 25 race management and safety boats on the water and 75 volunteers involved afloat and ashore each day during the championships.

Principal Race Officer is Kevin Wilson, with Race Officers Gary Hosie for the Open Fleet, Paul Pascoe for Intermediate and Mark Taylor for the Green Fleet.

“This is the largest regatta we have conducted since the Australian 29er, 49er and FX Championships in January last year”, said Royal Brighton’s Club Captain James Heywood. “We are looking forward to welcoming all these young sailors to the club for some fun and great sailing over the weekend.”

The championships conclude on Monday afternoon.