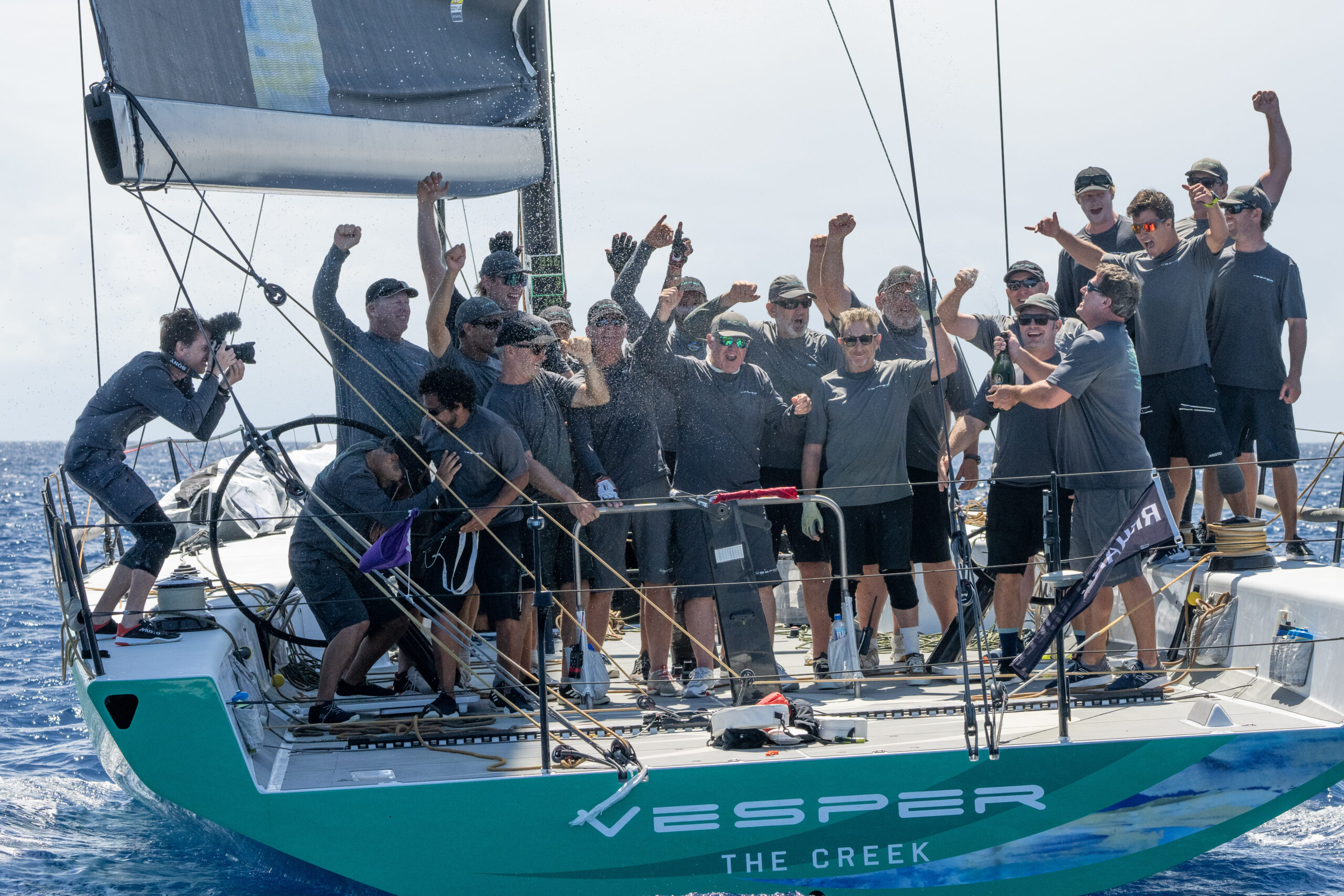 Big winds, large waves and an Atlantic swell made the start of the week challenging, but conditions have got gradually lighter during the week. Today the forecast was for 12-15 knots from the east-northeast. In fact, the wind was lighter at start time off Gustavia and as the maxis circled the western lee of St Barts. However as soon as they ventured out to the more exposed north shore, conditions built.

In the Maxi class order was restored after yesterday with Vesper beating Hap Fauth’s Botin Partners 74 Bella Mente on IRC corrected time by five and a half minutes, the biggest margin to date. Having won every race but one here, the peppermint-coloured Maxi 72 ended the week on six points to Bella Mente’s 12, giving her maximum points for this third event in the IMA’s Caribbean Maxi Challenge.

This week’s result confirmed several changes made to the Vesper team for this season, including bringing on veteran America’s Cup trimmers Warwick Fleury and Simon Daubney.

Of today’s racing, Vesper tactician Gavin Brady commented: “We had breeze on the other side of St Barts and a good high-speed run down on the front edge of a rain cloud. That caught everyone out – we all had down-range sails on. We were looking over our shoulder going ‘we need a heavier weather jib…’ Bella Mente changed, but we just hung on with our light jib and were able to roll them. Simon and Warwick did a nice job re-moding the boat and Jim [Swartz] was doing a really nice job driving.”

Summarising this week’s racing, Brady continued: “I don’t think I’ve ever seen so many lead changes in maxi racing. They have happened every day, which you don’t see elsewhere. Maybe it’s the waves: They create huge opportunities: two good waves can gain you 100m.”

Fresh from a winter refit that included adding two foot to her transom, Bella Mente has improved all week but is yet to match Vesper’s speed and so resorted to aggressive match racing, much to the delight of spectators. “We’ve learned a lot,” said tactician Terry Hutchinson. “Vesper is sailing at a higher level – we have to understand why and solve that. This has been a hard regatta because we were late with the boat, so it took a while to find our groove.”

Today, Hutchinson observed, “Bella Mente led for the first half of the race and Vesper led for the second half, the important half! Today was probably our best racing day. We didn’t make a lot of mistakes. But eventually they ran us over with speed and that is a hard thing to beat…”

Like Vesper, Jim Madden’s Swan 601 Stark Raving Mad VII endured just one blemish on their otherwise perfect score line. Today they won by 5 minutes 41 seconds on corrected time. “We thought it was going to be light air, but the Caribbean just can’t tolerate that!” quipped tactician Anthony Kotoun. “The wind filled in – we saw some 18s. It was beautiful – a great racecourse too today. It has been good to get down here and race, to get the thing going again.”

International Maxi Association President, Benoît de Froidmont has been here all week as ‘Ambassador’ of this year’s Les Voiles de St Barth Richard Mille. He raced on board Wendy Schmidt’s Deep Blue when she won yesterday’s Maxi race. He commented: “It was a fantastic week. Everything was there to make it a great success – lots of boats, great weather and a race committee and organisation as perfect as usual. Walking the pontoons, everyone seems very happy with this 11th edition.

“The quality of the racing in the maxi fleet has been very high here – as high a level as we see in the Med. It shows that the top maxi teams are very keen to come.

“Everyone is very enthusiastic to have our IMA Caribbean Maxi Challenge and the RORC-IMA Transatlantic Race. We have been talking about it for a long time and it is certain to grow rapidly in the coming years.”

The IMA’s Caribbean Maxi Challenge continues with its final event, Antigua Sailing Week taking place over 30 April to 6 May.