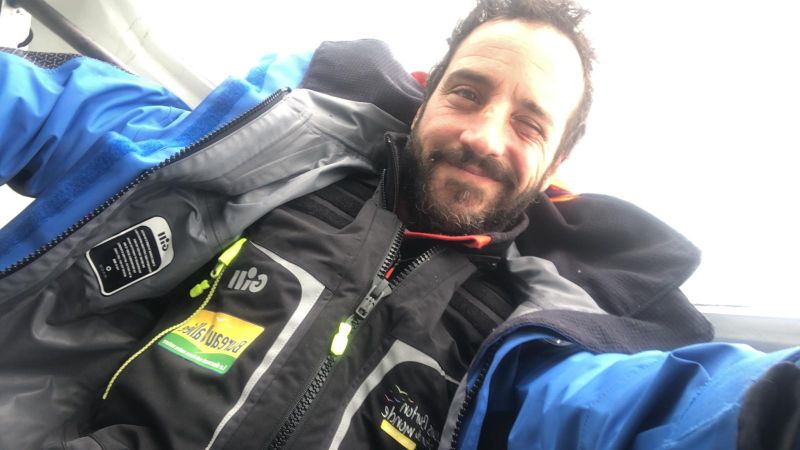 Photo sent from aboard the boat Bureau Vallee 2 during the Vendee Globe sailing race on January 4, 2021. (Photo by skipper Louis Burton) Cape Horn

“Any one of four or five skippers can still win this race,” warned Jean Pierre Dick on the French Vendée Globe Live show this afternoon.

With less than 5000 miles to sail now to the finish line, the leaders are passing Itajai in southern Brazil, the finish port of the Transat Jacques Vabre, and therefore retracing a now familiar climb back to France which many sailed solo last year after the end of the two-handed race to Brazil.

But with the chasing group now having eroded Yannick Bestaven’s lead to 226 nautical miles and five skippers withing 345 nautical miles, the next 48 hours – and the passage of the cold front at Cabo Frio by Rio – and strategic choices to get to the Easterly trade winds is going to be pivotal.

In second place, 224 miles behind Beataven, Charlie Dalin explained, “I am happy to have narrowed the gap so much. But the rubber band should compress again, up to the cold front at Cabo Frio which is ahead for us. The passages in this cold front change vary from model to model, it is not easy to find the right route.

“It will be the key moment, the last hurdle before the trade winds. it is all moving, there will be opportunities which open and close according to the models. Since you can't teleport from East to West, you have to make choices early enough, which makes it difficult. This front is going to redistribute the cards one way or another. Everyone will have their East / West positioning with which they will have to play until the doldrums. This is the last big strategic obstacle (until the doldrums) everyone will sail their line.”

Still fighting through big winds and seas with her keel swing, Isabelle Joschke is attempting to extricate herself from the nasty low pressure which dealt a final blow to the temporary keel fix which had been set up to hold her keel central after her ram failed a week ago.

She still had 30 knots today but sent a moving video. “I am bitterly disappointed, so sad not to be able to finish this course. But I am proud. Proud of sailing this far and proud of my race. Proud to have rounded the three capes. And to have shown that with MACSF we are all present and a force to be reckoned with. That’s something they can’t take away from us,” bravely stated the Franco-German skipper who had been lying 11th in the South Atlantic after actually sailing more than 21,000 miles on the water and with less than 5,700 miles to sail.

She explained, “This is not the easiest thing at the moment. I’m sailing in conditions that are fairly rough with quite heavy seas. There must be a swell of 5m and and between force 7-9 Beaufort. A bit like the conditions when I rounded Cape Horn. I spent the night bailing out the boat, as there is an ingress of water. I bailed and I pumped. I have managed to stem the flow of water. Now the most important thing is to get to a port and safety and to get myself to safety. I am extremely sad to have to retire. I think the Vendée Globe has been cruel to me.”

Technical Director of the MACSF team Alain Gautier recapped, “A few days ago, Isabelle had an issue with her hydraulic cylinder which is used to cant the keel from one side to the other and so when there is an issue, we had a cylinder which allowed us you to block the keel in the central axis. We set up a form of false cylinder that allows you to maintain the keel blocked in the central axis so you can continue sailing and this is what failed,”

To the Magic Point and beyond…

According to JP Dick – fourth in 2016 and in 2012 and sixth in 2004 – the battle in the South Atlantic is all about getting to the ‘magic point’ when the skippers can set up on starboard tack and accelerate on the brisk climb in the trade winds to the Doldrums.

For the first five it is about finding the best transitions between the small weather systems and avoiding the calm areas. Yannick Bestaven has seen his losses stabilise and he will be first into the cold front transition when every leading mile will be worth double when it comes to touching the trade winds which will gradually strengthen.

Behind him, four skipper (Dalin, Seguin, Ruyant and Burton) who will group even tighter in the next 24 hours will put him under real pressure. And so from here to Les Sables d'Olonne where the winner is expected from January 29, the Vendée Globe is going to be electrifying.

To the Horn and beyond…

Tomorrow Monday will start a great new week on course for Arnaud Boissières, Alan Roura, Jérémie Beyou and Pip Hare. The four skippers will reach Cape Horn to end a very hard time all the way across the South Pacific. The conditions are still anticipated to be difficult on the approach to the mythical cape in a freezing southerly wind. The rough weather is expected to last almost as far as the Falklands Islands for this group of four IMOCAs.

Boissières, ‘Cali,’ who is passing the Horn for the fourth time said today, “I'll be happy to get out of this Pacific! But I know that the Horn is a still a long way to the finish, we are still in the south after the course, we must continue to be careful and remain vigilant.”