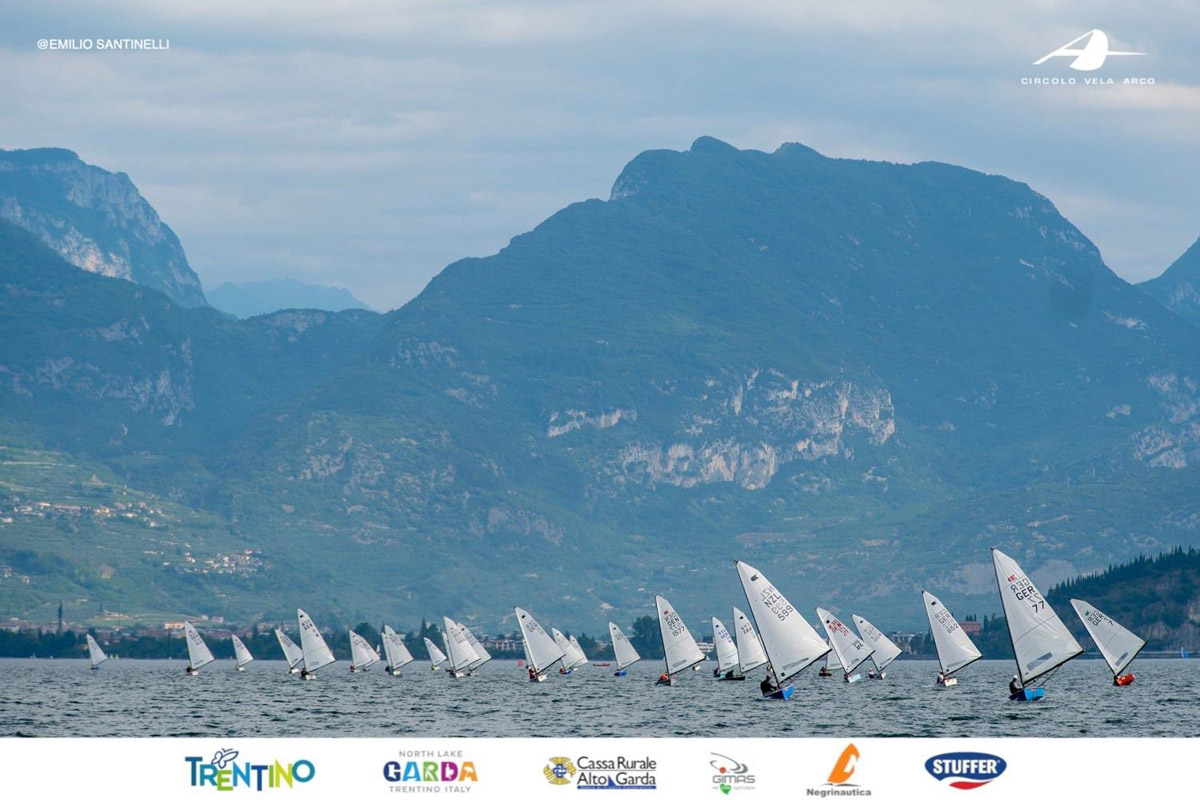 Though the event was overshadowed by some unusual and inclement weather, the racing was concluded in a stiff northerly with a first start at 0830.

In Race 7, Behrens tacked away from the boat end and went right. The rest of the fleet went up the middle, but the first three at the top mark were from right, left and middle.

Petersen capsized tacking for the top mark, while Behrens got away down the reaches and had a big lead. Jan Dietmar Dellas (GER) dropped from second to fourth while Lebrun got through to second and Pavel Pawlaczyk was third, with New Zealand’s Greg Wilcox fourth, keeping his podium chances alive.

The final race was close at the first mark, with Lebrun and Petersen leading, and Behrens and Wilcox leading the chase. It stayed that way for the rest of the race, with Lebrun getting away a bit. Petersen took an easy second to secure third, while Behrens beat Wilcox by half a boat length.

Lebrun said, “Once again we had to go out pretty early. And we had rain and cold conditions, so it was hard to keep motivated. The wind was stronger than the other days in both races and the race committee hesitated before starting the final race.

“Overall, we had eight good races, which is very good for the class and I think for everyone who came here. It was good to see everyone again and talk together. I think a lot of people were glad to meet each other again. I was happy to be here even if it was a long way from France.

“It was a very good opportunity to race against some very good sailors, try a new rig and enjoy the conditions. Not sure when the next regatta will be, but I am happy we did this one.”

“We owe a lot of thanks to the Circolo Vela Arco for putting on a great event for us. Altogether it was a pretty good regatta and everyone is very happy they came. I think the race committee did a great job, the club is really nice and we should definitely come back here.”

It has been a long-held desire of the OK Dinghy class to have events on Lake Garda, so many hope this will be the first of many.

The OK Dinghy class was active in Italy some 30-40 years ago, so in all likelihood, the last OK Dinghy regatta on Garda was at least a generation ago, if not two. There are now a small number of OKs in Italy, so it is hoped bringing the fleet to Garda will help grow more interest.

Certainly, the sailors who travelled to Garda were determined to go and have fun and seemed to have made quiet an impression. Seeing OK Dinghies sailing on Lake Garda for the first time in a long time was quite something.

When CVA agreed to host the 2021 World Championship, there was a huge enthusiasm to attend, from all over the world and it would almost certainly have been the largest world championship ever.

Unfortunately, in the interests of fairness, that couldn’t happen this year and that was a great disappointment to many. However, it will happen in the not too distant future. The OKs will be back.