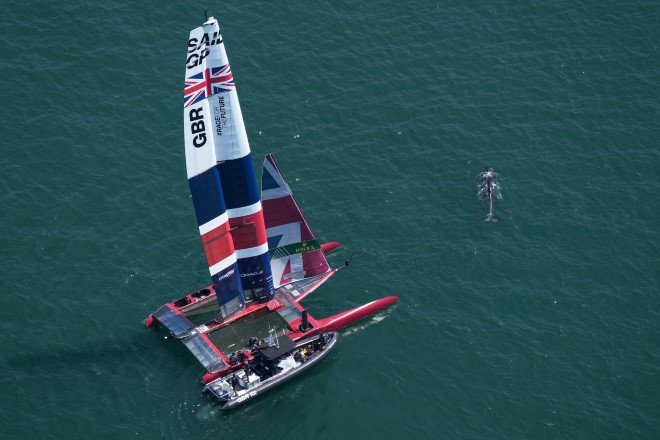 Plymouth is the place to be this weekend

Plymouth Sound, the natural amphitheater of Britain’s Ocean City, is set for the world’s most exciting racing on water as the Great Britain Sail Grand Prix – the third event of SailGP Season 2 – takes place this weekend.

It is being billed as a potentially crucial week in the global championship – with the leaderboard incredibly tight – as the eight national teams approach the third event of the season. Only two points separate the top three SailGP teams – Spain, Great Britain, and Japan.

The British team – with interim driver and Olympic champion Paul Goodison at the wheel – is currently in second place going into its home event. The British are just behind the Spain SailGP Team led by driver Phil Robertson – the focus of the latest SailGP: ‘Racing on the Edge’ episode – who against all odds sit atop the leaderboard.

Robertson said: “We’ve got to a level now where we are comfortable on the boat, and the young guys on the team are coming up with maneuvers and creative solutions which is what we want to see.

We’ve just got to keep consistent and keep chipping away and making the right calls in every race. We haven’t done anything special, but the beauty of our team is we’re young, we’re keen and we’ve got no egos. That’s dangerous.”

Looking to maintain momentum from the previous event in Taranto, Italy, will be Nathan Outteridge and the Japan SailGP Team who were crowned the Italy Sail Grand Prix champions in light winds and reduced three-sailor crews.

With the potential for similar light winds this weekend, Outteridge and his team have got their eyes on capitalizing on the conditions to take the top position again.

The pressure will be on for the home team. The British team is targeting significant improvement from Italy where they finished sixth.

Currently in second place on the overall leaderboard, the Great Britain SailGP Team – with interim driver and Olympic champion Paul Goodison at the wheel – hopes the support of the home crowd will propel them up the leaderboard and back into first place, in time for Sir Ben Ainslie’s return to the driver’s seat at Aarhus in Denmark on August 20-21.

Goodison said: “It’s fantastic to be back out on English waters – it’s been a while since I’ve sailed here. I don’t think these guys were expecting the nice conditions here, but we are hoping for more wind this weekend. It’s a brilliant venue, a natural amphitheater, and the crowds are going to be in for a real treat.

“Is it coming home? Let’s hope so! I’m really excited and looking forward to the racing, and if it all goes our way, I’m sure we will be up there.”

Jimmy Spithill’s United States SailGP Team is looking to make a strong comeback going into this third event, after they suffered a series of heart-wrenching crashes in both Bermuda, and Taranto.

Currently sitting in the middle of the board is the New Zealand SailGP Team. With a fleet win in Italy, interim driver Arnaud Psarofaghis goes into his second event of the season looking to build on that momentum, while Peter Burling and Blair Tuke prepare to defend their Olympic title at the upcoming Olympic games in Tokyo.

The Australians led by Tom Slingsby, and the Danish team driven by Nicolai Sehested, look to make serious headway in the climb to the top of the leaderboard, each looking for their first event win in the first half of SailGP Season 2.

Ahead of the racing kicking-off, earlier in the week SailGP announced the Impact League, a world-first integrated second leaderboard created for all eight international teams – one for sport and one for purpose – where they are rewarded for the positive actions they make to reduce their overall carbon footprint and help accelerate inclusivity in sailing.

Throughout the week, building up to the Great Britain Sail Grand Prix in Plymouth, the Race For The Future initiatives have been more evident than ever.

Activity taking place in Plymouth has included an Adopt-a-Club program with eight local sailing clubs, an Inspire Careers and Racing community engagement program, STEM Crew live lessons with the Ocean Conservation Trust and much more. All eight teams are racing for purpose, as well as sport.

All eight teams launched on Plymouth Sound on Thursday, July 15 and Friday July 16 for official practice racing, during which Billy Besson’s France SailGP Team enjoyed a special guest onboard its F50 catamaran when Musto ambassador Zara Tindall MBE joined them for a sail.

In today’s final race preparation, training was halted due to an unexpected visitor; a whale was sighted in the vicinity of the racecourse. SailGP’s Marine Mammal Plan was put in place to protect marine mammals in cities where it races. On a sighting by the marine mammal officers, sailing is halted, until the mammal has time to move away from the race area.

With stunning conditions of sunshine and mid-20s degrees Celsius expected over the weekend, over 1,000 boats have registered to watch the drama unfold on the water.

A ticketed official spectator area on the Plymouth Hoe is sold out for both days, adhering to government guidelines and SailGP’s own COVID-Safe plan.

However, boat owners are still invited to take their vessels out to watch the racing and can register via SailGP’s Bring Your Own Boat Program. By registering, fans will receive all of the racecourse information and a VHF channel to listen to for all the latest updates.

Fans unable to attend can watch all the action broadcast live in 175 territories, including via SKY Sports in the UK and Ireland as well as live on YouTube. The award-winning SailGP APP – available in the App Store and Google Play – gives the ultimate viewing experience with full access to data, and live commentary.

The Great Britain Sail Grand Prix will comprise two days of racing with five fleet races followed by a podium race, with the top three boats in the ultimate showdown to decide the winner on Sunday, July 18.

As an added incentive, additional prize money will be awarded to the podiums at each event in addition to the $1 million up for grabs at the Grand Final in San Francisco in March 2022.