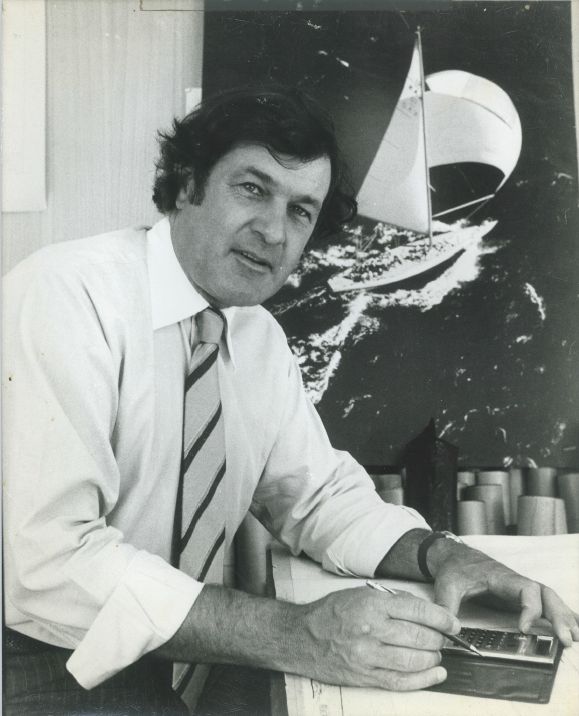 Hood was previously an assistant to Alan Payne, the designer of Australia’s first America’s Cup challenger Gretel in 1962 which, although eventually going down 1-4 to American defender Weatherly, showed great promise. That prompted the New York Yacht Club to re-interpret the Cup rules to forbid any future challenger from using US test tanks, sails, sail cloth, masts winches or fittings.

Hood’s Dame Pattie design, built in timber by Billy Barnett in Sydney and skippered by Jock Sturrock, was probably an advance on Constellation, which whacked the 1974 British challenger Kurrewa IV with four straight races wins. But the Sparkman and Stephens design Intrepid was a step ahead again and won with another 4-0 walkover.

Hood was a major contributor to Sir Francis Chichester’s record of becoming the first man to sail around the world solo with his yawl Gipsy Moth IV in 1966.

When Chichester pulled into Sydney frustrated by repeated broaching problems Hood designed a modification to the keel, which was fitted during a 48-day stopover, and reconfigured some of the rigging. Chichester was “tickled pink” with the improvement in balance and said that he had found the boat much easier to steer.

Hood designed ocean-racing and cruising yachts but will probably be best remembered among sailors for his Hood 23, one of Australia’ earliest and most successful stock fibreglass production keelboats, designed in 1966.

Its raised foredeck configuration allowed sitting headroom below with four bunks and room for basic cruising necessities. With a ballast keel providing stability and a simple masthead rig it could be sailed by two people and raced by a crew of three to five.

Hood said of the Hood 23, in an interview recorded by the National Maritime Museum: “I think it introduced people to the idea that you could get a reasonably high-performance sailing boat in a small size that was properly built, properly designed.’

The first Hoods were made by his own Hood Boat Company Ltd; most eventually by Max Stoddart in Queensland with number running into hundreds. The class enjoyed good class racing in big fleets for many years.

It no longer races one design but individual boats are still winning races in mixed handicap fleets, they remain popular for day sailing any are to be seen, sadly, as only “mooring minders” on Sydney Harbour.

During his long career as a naval architect Hood designed a large range of commercial vessels including the paddle steamer Emmy-Lou, operating out of Echuca on the Murray River, working and trading boats for clients throughout the Pacific and in South East Asia.

He was made an Officer of Australia (AO) in 1994 for his service to the maritime industry as a naval architect.

Largely wheelchair bound, following knee and hip problems, for the last five years of his life, he made an applauded appearance two years ago at a lunch the Historical Skiffs Trust conducted at the Sydney Amateur Sailing Club to raise funds towards building the replica of Bill Barnett’s champion 18-footer Myra Too and to honour Barnett, Dame Pattie’s builder.

Warwick Hood's family advises that a public commemoration/celebration of his life will be held at the Royal Sydney Yacht Squadron, Kirribilli at 2.30pm next Thursday, July 16. Hood is survived by his partner Jennifer Dakers, former wife Julie Hood (Mazlin), daughters Carly and Alison, four grandsons, a brother and a sister.