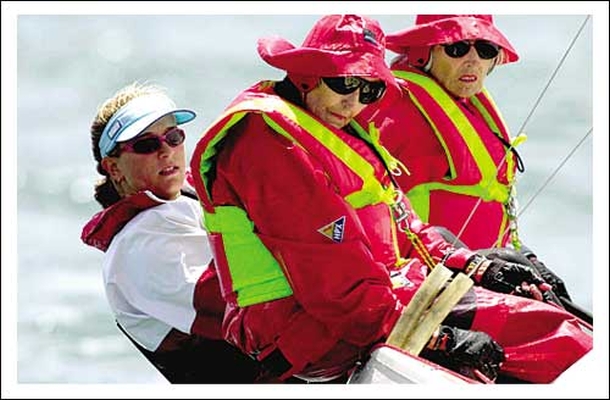 The Warn sisters with young Tneal Kawala on the bow at Sail Melbourne 2003. Photo Jeff Crow.

It is with great sadness we advise the death of Patricia Warn, a 59-year member of the Cruising Yacht Club of Australia, who passed away on Monday, 27 April aged 85.

With her fraternal twin, Joyce, Pat was a guiding light in the Yngling class, which made its entrance to the Olympic Games in 2004. The sisters have also been an inspiration to women in sailing.

Pat and Joyce, who turned 85 in March, lived together in Manly, and did everything together – including joining the CYCA in 1956. They were impossible to pick apart unless you knew them well. Most people thought they were identical twins, but Pat and Joyce would correct them: “We are fraternal twins!”

Pat was the skipper, Joyce the crew. Pat was the quieter one, Joyce the spokesperson. They both encouraged many young women sailors into the Yngling keelboat they had won so many regattas with, including Tneal Kawala who sailed bow for the sisters for some time.

The ladies may have been light in weight, but they were tough opponents on the race course with a lot of confidence and nerves of steel.

Pat and Joyce travelled the world with their Yngling, surprising a lot of younger sailors in the class; not only because of their age (they were still competing at the top level well into their seventies), but because of their canny ability to pick the shifts in the class they knew back to front. And they were tough to beat in light air.

In 2002 the twins were made Life Members of the International Yngling Association and of the Royal Sydney Yacht Squadron for their services to the class and to sailing in general. When they weren’t competing, the ladies were in on-water race management crews at major regattas. And they were very approachable, always happy to pass on their knowledge.

Pat and Joyce won at least four Australian Championship titles, sailing their boats named ‘Missey’ and the well-named ‘Canny’ respectively. On the same honour board are skippers’ names Nicky Bethwaite, Karyn Gojnich, Krystal Weir, Melanie Dennison and Neville Wittey, all of them Olympic sailors. In 2006 Pat and Joyce bought a new boat and named it ‘Holly’.

I was privileged to know these unassuming sisters, and two experiences I witnessed stand out in my mind. One was in the 1990’s when a Saturday afternoon race day turned to squall conditions on Sydney Harbour. Some smaller keelboats took water and were sinking, while other boats of all descriptions were in trouble, some running aground at Shark Island.

I was racing a Dart and watched Pat and Joyce at their best, rescuing some, giving assistance to others and passing instructions to rescue boats on how best to help those in distress. They were at their best.

My favourite occurred at Sail Melbourne, the Grade 1 Olympic and Invited classes regatta, in 2003. On a light shifty breeze Port Phillip, Pat and Joyce (with Tneal on the bow) gave the fleet, including Olympic campaigners, Nicky Bethwaite/Kate McHugh/Kristen Kosmala and Melanie Dennison/Fiona Herbert/Caroline Aders (the latter World Ranked No. 2 at the time) a lesson in light weather sailing.

Speaking after the race, skipper Pat said, “We are ecstatic, we sailed our own race. The weather was really good to us.”

Joyce added: “in the second race we were lying third, but a good wind shift came through and we were on the right side of the course, so that helped us.”

Nicky Bethwaite said today: “It's gratifying to see the number of girls and women who are sailing these days; a far cry from just a relatively short while ago when Pat and Joyce were two women of the very few who took sailing seriously.

“When Karyn Gojnich (then Davis) and I trained for and competed in the first Olympics to have a separate women's sailing class in the 470 in 1988, the Warns were extremely supportive.

“As the enormity of the challenge became apparent – the cost of equipment, overseas training and coaching – we found we had strong support from Pat and Joyce. They turned up at all our fundraising events and were nothing short of brilliant in encouraging us to succeed.

“Fast forward to another Olympics challenge in 2004, this time in the Yngling. Again, the enthusiasm displayed by Pat and Joyce was fantastic. They took us under their wing in 2001 and were generous in sharing their knowledge and experience of the class.

“They were also damn good competition and I'll never forget one of the qualifying regattas, the Nationals being sailed in Melbourne, when they won a race by five minutes!

“My sincerest sympathy goes to Joyce at this time,” Nicky ended.

“Although only one race has been sailed, it is extraordinary to note that Sydney’s Warn sisters, in 27th place and steered by Pat, with Melbourne’s Margaret Moran in the middle, are leading the Australian Olympians for Athens, Nicky Bethwaite/Kristen Kosmala/Karyn Gojnich.

“Even more extraordinary, is that the stalwarts of the Yngling class in Australia, Pat and Joyce are aged in their early seventies.”

Pat lived life to the full and gave so much to the sport of sailing. She will remain in a lot of memories.

Our deepest sympathies go to Joyce.

Close friends are invited to celebrate Pat’s life at a Memorial at the Royal Sydney Yacht Squadron, 33 Peel Street, Kirribilli on Tuesday 5 May 2015 from 12:00pm to 2:00pm