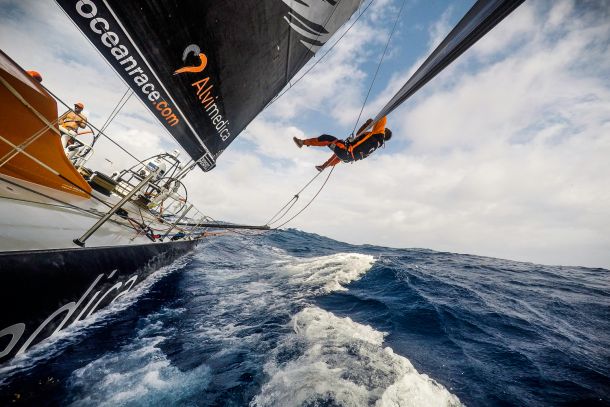 ALICANTE, Spain, April 29 – Overall leaders Abu Dhabi Ocean Racing (Ian Walker/GBR) positioned themselves ominously at the head of the fleet midway through Leg 6 on Wednesday as the six boats continued to jostle for position.

At the beginning of the week, the Emirati crew, which has a seven-point lead at the top after five of the nine stages, were concerned they were losing touch with the pace-setters as they fell some 20 nautical miles (nm) off the lead to the west of the main pack. Slowly but surely, however, they have edged their way back up the leaderboard and finally overhauled Team Brunel (Bouwe Bekking/NED) at the top early on Wednesday (0940 UTC), albeit by the thinnest of margins (0.5nm) from the Dutch boat.

There are still just under half the overall race points to race for and more than 2,500nm left in a 5,010nm leg from Itajaí, Brazil, to Newport, Rhode Island, USA, where the boats are expected to arrive around May 7. But the mood on Azzam is, understandably, sky high and there is a clear confidence in the way navigator Simon Fisher (GBR) is routing the boat through the Atlantic towards the Caribbean islands.

Certainly, skipper Ian Walker is really enjoying the cat-and-mouse sailing as the latest blog from Onboard Reporter, Matt Knighton (USA), illustrated. “Ian loves how this is playing out. No breakaways to the south or north – everyone is holding together,” Knighton wrote. “With the thousands of miles left on the track, he’s patient to wait. It’s a boat speed and angles game once again and he’s keen to play. It’s now about managing the top three teams and keeping the boat in one piece – another reason we’re thankful for the shape of our sails after five legs.”

While others’ sails are beginning to look distinctly battered, Walker has been proud of the conservative way he has managed his sail wardrobe – a strategy which could pay handsome dividends as the race enters the home straight in Europe in a few weeks’ time.

The leg and the race, however, are a long, long way from being decided and all of the six crews will still consider themselves very much in the hunt, especially with a major gybe to carry out towards USA once they have passed north of the Virgin Islands over the weekend.

Team SCA (Sam Davies/GBR) lost ground as they steered from furthest east to west of the pack while Team Alvimedica (Charlie Enright/USA) also lost a few miles to the rest as they tucked into the centre of the peloton from a leeward position.

Meanwhile, Enright has been named one of 14 ambassadors for 11th Hour Racing. The programme is part of The Schmidt Family Foundation and seeks to establish a new platform, emphasising the responsible use of energy and resources in the context of sailing. Enright and his fellow ambassadors will aim to influence positively the sailing industry and promote marine stewardship. He will speak on the threat of marine debris at a forthcoming Ocean Summit on the subject at the Newport stopover on May 15.