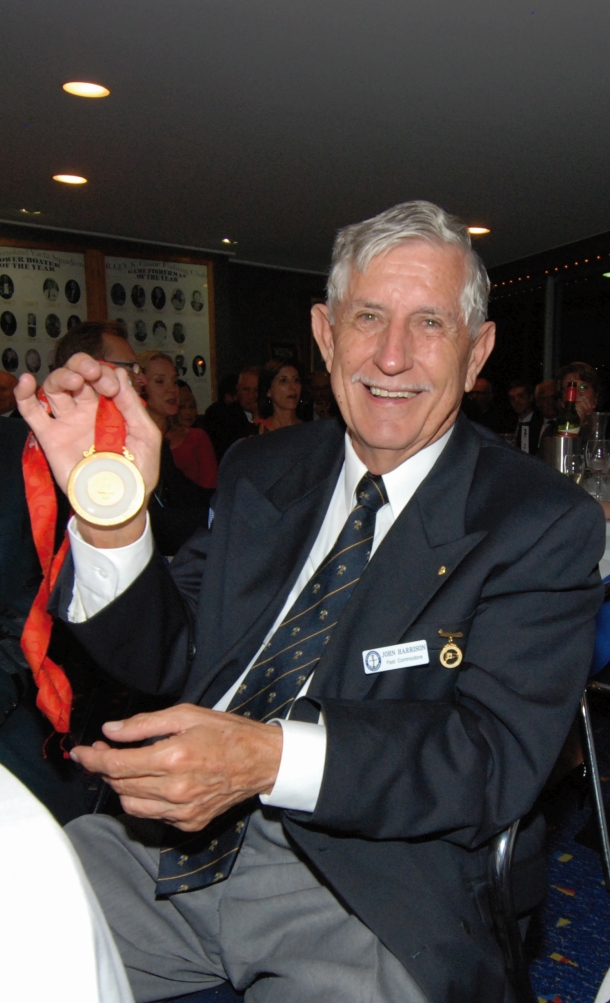 John Harrison AM, section manager of the Australian sailing teams at the 1992, 1996, and 2000 Olympics, died last Friday in Brisbane after a long illness, aged 80.

Yachting Australia, in recognising his contribution to the sport with its Volunteer award (formerly Services to Yachting Award) for 2000-2001 said:

“The Sydney 2000 Olympic Games was the pinnacle of a lifetime of volunteer work in sailing by John. At his third Olympic Games for Australia John delivered the Australian Olympic sailing team the best possible management support a team could hope for.

“Working under stressful conditions due to the demands of a home Games and the administrative requirements of the Australian Olympic Committee, John ensured that the team members were fully supported both on the land and on the water.

“He managed a team of 18 athletes and 11 support staff at what was Australia’s most successful Olympic sailing regatta. John has established a standard of team management that will be difficult to match. The Olympic team members and staff appreciated his efforts and believe that John should be recognised nationally for his contribution to Australia’s Olympic sailing history.”

Harrison was a former Commodore of the Royal Queensland Yacht Squadron and the Squadron honoured him last year for his commitment to Olympic sailing by forming the “RQYS John Harrison Olympic Support Foundation”.

Commodore Kevin Miller in announcing the foundation said: “In the coming year it will sponsor the construction of $500,000 worth of trade sheds on site to better house our boating quality trades on long term leases and will thereby have available up to $100,000 per annum to support our younger talented sailors getting to qualifying international regattas.”

John Harrison was a highly competitive Finn sailor in the very strong Brisbane fleet of the 1970s that included Olympian Ron Jenyns. Sydney friend and former Australian Finn champion Geoff Davidson recalls, “He used to say ‘I can beat you any time I want to.’”

Family and friends are invited to a Requiem Mass at St John Vianney Catholic Church, Manly, Brisbane, on Thursday March 5 at 10am.

Yachting Australia has offered condolences to the family of John Harrison. Australian Sailing team performance director Peter Conde said:  “He was an absolute gentleman and a great man.

“John’s influence over Australian sailing is massive. He was instrumental in bringing Victor Kovalenko to Australia and John and his wife Gayle-Anne remained great friends to Victor and his family.  John was also a mentor to me when I took on this role as performance director and leading into the London Olympics.

“He was a past Commodore and life member of the Royal Queensland  Yacht Squadron for his great work in the sport. As an active sailor, John competed successfully in Finns and Etchells as well as ocean racing over his long sailing career.”